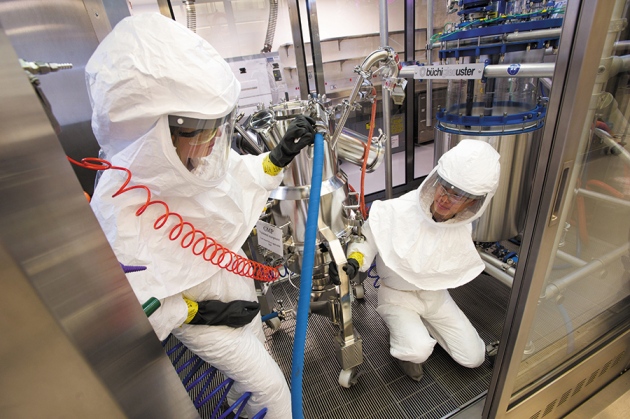 Researchers prepare to filter crystals at an Amgen small-molecule-manufacturing facility.

In the past decade, many large pharmaceutical companies have moved to using green-chemistry practices for drug discovery, development and manufacturing. These firms include ours, Amgen, and others such as the Merck Group, Abbott, Johnson & Johnson and Roche. Ranking systems such as the Dow Jones Sustainability Indices and the Pacific Sustainability Index1 track how well firms are doing. This shift is being driven by the realization that processes that are cheaper and environmentally superior deliver a competitive advantage.

Success depends on instilling a culture of sustainability into a firm. Staff at all levels — from management to lab scientists — need to understand the concepts of green chemistry and how they might be embraced to everyone's benefit. The future rewards of major operational changes need to be visualized and funding must be put in place before any results are realized.

Here we set out how to build such a culture, based on our experience at Amgen, which is headquartered in Thousand Oaks, California. Change cannot be achieved overnight, but we found that a series of small wins can build momentum until the vision becomes clear and is accepted. By following a combination of bottom-up2 and top-down3 approaches, Amgen rose from having a C+ rating on the Pacific Sustainability Index in 2007 to become one of the top-rated (A+) companies in 2012 (see 'Sustainability scores'). The ingredients are: an empowered team with management support to lead the transformation; staff education, awareness and recognition; investment in technology; development of metrics and tools; and external collaboration and outreach4, 5. 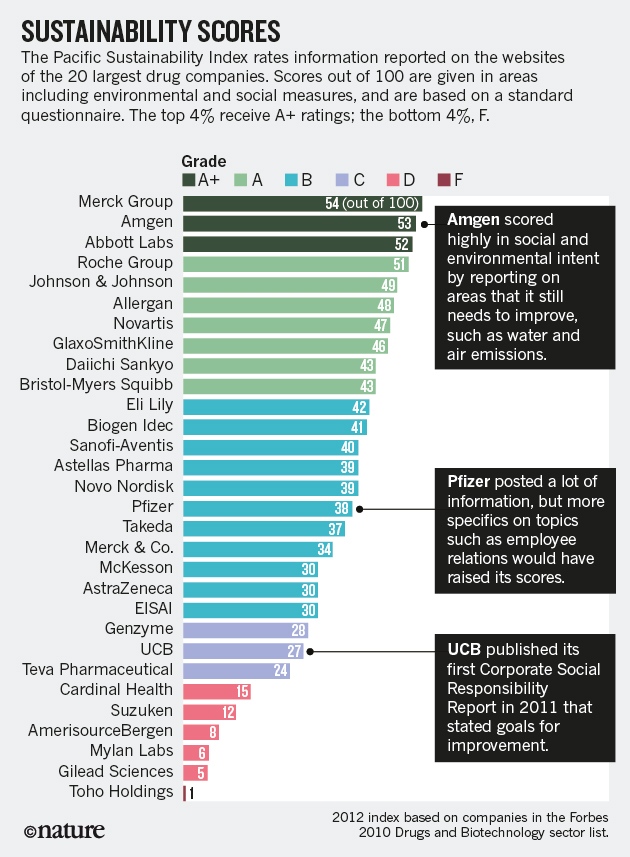 Our approach focuses on the 'triple bottom line'6 — profit, people and planet — and the 12 principles of green chemistry7, which include minimizing ingredients, waste, toxicity and energy. Each of these principles can be applied to a sector or product. For instance, a detergent's formula might be redesigned so that it degrades without accumulating, persisting or releasing toxic chemicals into the environment.

Drug development has its own challenges. A pharmaceutical's therapeutic response depends on its molecular structure. Existing drugs have already survived a battery of toxicological and therapeutic tweaks, as well as clinical studies that took years to complete. Redesigning a drug to be more readily degradable could become an entirely new development project — changing its structure might alter its function. But many green-chemistry principles can make processes more efficient, for example by reducing the number of reaction steps, or by using less energy or materials (see ‘Green-chemistry principles to drive sustainability’).

The challenge is to catalyse a new norm across the industry while meeting institutional expectations and demonstrating value.

Empower champions. The first step taken at Amgen was to create a high-level green-chemistry team that spanned the company's many functions. The aim was to define and entrench green-chemistry expectations across the company — framed as 'how, why, what and where'. The team initially comprised six scientists — a chair (one of us, J.L.T.), representatives from process and analytical chemistry, engineering, environment, health and safety, and drug-production technologies — and was supported by an executive sponsor (the other of us, M.M.F.). Medicinal-chemistry teams and biological-molecule representatives were added later. All steps of drug discovery, development and manufacturing at Amgen were considered across the company's multiple sites. Resources had to be secured for communication, collaboration and development of green methodologies and technologies.

Raise awareness. The green-chemistry team at Amgen set up a series of lectures by innovators and thought-leaders from within and outside the company to spread knowledge of green-chemistry principles, their potential for drug development and examples of good practice. Websites and visuals were created and disseminated. For example, notices highlighting the 12 principles were placed on hoods and in laboratories, and green-solvent and reagent-selection guides were supplied. Challenges had to be acknowledged, including practical difficulties in using sustainable methods and materials, the importance of maintaining industry competitiveness during the transition, as well as the need for transparency in meeting regulatory expectations.

The greatest difficulty we encountered was providing a vision of the future state of the organization and convincing people that it was achievable and worth pursuing. Employees needed strong incentives to adopt sustainable principles in their already challenging careers. Productivity and operational efficiency were expected to rise regardless of change, and developing new drugs across the industry was becoming increasingly difficult. Converting sceptics was hard. Scientists demanded data, precedents and straight answers as to why or how an initiative should or should not be pursued. Business leaders wanted figures on efficiency, cost and environmental impact.

Expand collaborations. To share knowledge, Amgen joined the American Chemical Society's Green Chemistry Institute's Pharmaceutical Roundtable and the IQ Consortium's Green Chemistry Working Group. These interactions provided: industry harmonized tools, such as solvent and reagent guides; insight into industrial green-chemistry strategies and practices; access to metrics; opportunities to influence academic research; and discussions with governmental agencies such as the US Environmental Protection Agency, the Food and Drug Administration8 and the National Science Foundation. Getting many companies and regulators around the same table helped to smooth the adoption of green-chemistry principles, ensuring that cheap, safe and fast access to new therapies would continue.

Define metrics. We collated and shared quantitative tools for identifying internal strengths and weaknesses and best practices. Large pharmaceutical firms track the efficiency and waste of their drug portfolios through metrics such as the E factor, which measures kilograms of waste generated per kilogram of product, or process mass intensity (PMI), a similar metric that measures the total mass of materials per mass of product. The Amgen green-chemistry team developed metric calculators for the electronic notebooks used by scientists in the lab to pinpoint the most inefficient steps and operations within projects and to compare progress as a project moves through process development.

The metrics exposed a clear correlation between reducing waste and lowering process costs across Amgen. For example, using fewer materials in one synthetic process that was being developed for a new clinical candidate reduced the E factor by 82% and the cost by 83% while also improving the overall yield.

Recognize achievements. An internal award programme raised awareness among employees of the impact and advantages that green chemistry brings. The competition sought and broadcast the best examples of how adopting the principles led to better outcomes. Leaders presented prizes and the winners served to inspire others. For example, researchers working on etelcalcetide (which is being assessed as a treatment for a complication of chronic kidney disease) received Amgen's green-chemistry award for developing a process that reduced their organic-solvent use by more than 400,000 litres and shortened the projected manufacturing processing time.

Invest in technology. We explored new methods. For example, we switched to using enzymes as reagents in the synthesis of small molecules, moving away from convention reactions catalysed by transition metals. This reduced the number of steps and increased reaction throughput. For example, enzyme catalysis allowed us to make a key fragment of a drug candidate in early development, reducing the time to manufacture by 80%. It also eliminated4 volumes of organic solvent used during chromatographic purification of small molecules, doubled the yield and reduced the cost of the starting material by more than 99%.

“Corporate reporting must be transparent and present an unvarnished and accurate view.”

A standard procedure for oxidizing double bonds to aldehydes is ozonolysis (aldehydes are key chemical groups that enable the assembly of molecules). In one case study, our initial synthesis of an aldehyde intermediate used a flammable solvent in the presence of oxygen. Using a 'continuous flow' process — in which the conditions of a stirred reactor are optimized in real time to maximize the yield — rather than batch mode allowed us to process large quantities of material in a short time (5 kilograms of aldehyde intermediate in 18 hours) without building up dangerous amounts of reagents, intermediates, solvents, ozone and oxygen gas.

Even simple changes, such as using large, disposable plastic rather than stainless steel vessels for manufacturing biologic drugs (made using recombinant DNA technology), saved time, space, effort and money. Although it creates more solid waste, single-use vessels do not need rooms and resources such as water or steam to clean or sterilize them. Costs fall and production capacity can grow without increasing — and even by decreasing — the waste footprint of the plant.

Promote outreach. To spread the sustainability mindset across the industry, it will be crucial to work with academics to prepare the next generation of green chemists and with regulators to assess and reward efforts. To this end, Amgen scientists regularly give talks in universities on green chemistry. The public and investors value sustainable practices (albeit in ways that are hard to quantify) so it is important that they know of the company's commitment. To this end, corporate reporting must be transparent and present an unvarnished and accurate view.

All this hard work has paid off. In 2013, Amgen was declared a top performer in the pharmaceutical industrial segment by the Dow Jones Sustainability Index, and placed 21st in Newsweek's 2015 ranking of green US companies from all sectors.

Amgen's initiative is not window dressing. It is rooted deep in a broad commitment to deliver medicines to people in a way that uses fewer resources and promotes industry competitiveness. We will continue to focus on the principles of green chemistry, seek operational efficiency, explore new technologies and support education and research. And we will work with other companies in non-competitive areas to encourage the spread of green chemistry throughout the industry. There is still much to do to convince others to create a culture of sustainability.

Green chemistry can deliver for people, planet and profit. Those who embrace it will reap the benefits in future. Those who fail to evolve may cease to be relevant.