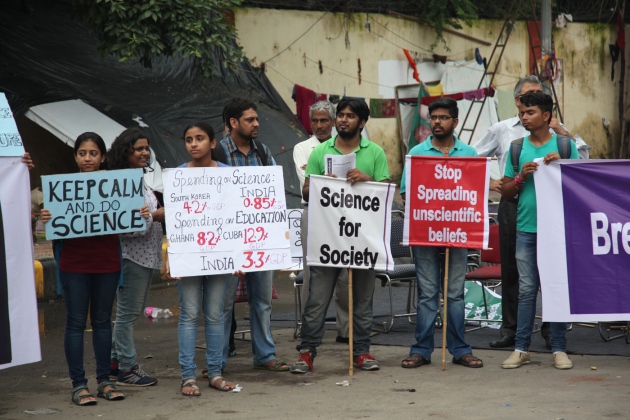 Scientists taking part in India's march for science in August were protesting against the spread of anti-science beliefs, superstitions and myths.

A leading Indian science-advocacy group is urging the country’s researchers to speak out against pseudoscience, which it fears has gained a foothold in the past few years, partly through support from some agencies of the Indian government.

The call to arms, made by the non-profit Breakthrough Science Society, comes after some members of an alumni association of the prestigious Indian Institute of Science (IISc), Bangalore, planned a workshop on astrology at the IISc for 25–26 November.

Strong backlash from scientists resulted in the event being cancelled on 28 October. The society’s general secretary, Soumitro Banerjee, says that it would be “detrimental to Indian science” for researchers to remain neutral on such issues. “India’s scientific community must be proactive in propagating a scientific bent of mind,” says Banerjee, a physicist at the Indian Institute of Science Education and Research Kolkata.

Muthya Ravindra, a computer scientist and president of the alumni association, says that the event, organized by one of its members, was still under discussion when “due to some miscommunications”, e-mails promoting the event were sent out.

But Ravindra says that despite criticism from scientists and other academics, people widely believe in astrology and seek its advice in newspapers, magazines and on television. He is unsure what role scientists should play in educating society on the dangers such practices may have. “It is very confusing to me whether we as scientists [should] criticize or take some part in finding a solution,” he says.

India’s ruling party, the conservative Bharatiya Janata Party (BJP) has shown support for giving astrology a place in universities. In 2001, then-science minister of the BJP-led coalition government Murli Manohar Joshi took steps to allow public universities to include astrology classes in curricula. However, the Indian government and science ministry did not have a role in the IISc alumni association’s planned astrology workshop.

Alarm in the Indian scientific community over anti-science policies and programmes has been brewing for some time. Several scientists who spoke with Nature are reluctant to comment publicly about it for fear of jeopardizing their jobs. Others took part in the March for Science organized by the 7,000-member Breakthrough Science Society in August in around 40 Indian cities, in part to protest the government’s support for ideas not yet backed by science. One area of concern, says Banerjee, is the government’s push for a national research programme on the health and other benefits of a combination of five cow products, known as panchgavya.

The Indian Institute of Technology (IIT), Delhi, hosted a two-day workshop last December to discuss ways to validate research on panchgavya, which was supported by India’s Department of Science and Technology, Department of Biotechnology, and Council of Scientific and Industrial research (CSIR), and inaugurated by India’s science minister Harsh Vardhan.

According to IIT Delhi’s website, Vardhan, who is a physician, “emphasised that use of panchgavya in practice and in daily routines will help to address the pressing global issues like climate change, resistance development, malnourishment, global health etc”.

Following the workshop, India’s science ministry formed a national steering committee to initiate a national programme on the topic.

Supporters of this research say that cow products should be considered part of India’s vast traditional knowledge base. But critics say that such unverified theories are pseudoscience, and that singling out the benefits of cow products is part of a larger political agenda by Hindus, for whom the cow is a sacred animal.

They also argue that research on topics such as panchgavya should be handled in a neutral manner rather than as a way of promoting traditional knowledge. Rahul Siddharthan, a computation biologist at the Institute of Mathematical Sciences in Chennai, says that the government must accept that any research involving traditional hypotheses about health could potentially refute those hypotheses. “Refutability is the essence of science,” he says.