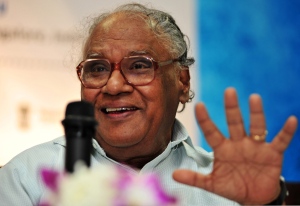 The paper, by Rao and materials scientist Saluru Baba Krupanidhi at the Indian Institute of Science in Bangalore, along with two of their students — Basant Chitara and L. S. Panchakarla — explored the use of reduced graphene oxide and graphene nanoribbons as infrared photo detectors and was published online by Advanced Materials in July last year1.

But three sentences in the introduction and a description of an equation had been copied verbatim from a paper published in Applied Physics Letters in April 2010 (ref. 2), with the source referenced. Chitara says he was responsible for the error, and has “sincerely apologized”. He says he had intended to modify the sentences later but forgot.

Rao says that he did go through the paper before it was submitted, but missed the problem. “Usually I write the entire paper but in this case, I had gone through mainly the results and the discussion.”

Krupanidhi says that he and his co-authors became aware of the mistake only when the editors of Advanced Materials drew their attention to it after the paper had been accepted and published online. The duplicated text was picked up using common plagiarism detection software.

Rao says that he wrote to the journal offering to withdraw the paper, “but the editor felt the work to be important and should be published with an apology”. The journal published the paper in its December 2011 issue with an accompanying apology3. Rao says that the apology was interpreted by Indian media to mean that the entire paper had been plagiarized.

“This should not be really considered as plagiarism since the scientific work is completely ours and the results are new,” says Rao.

Young researchers need better training to avoid such problems, says Rao.  “All graduate students should be taught how to communicate in science,” he says. “They need improvement in writing and related skills.”

Rohini Muthuswami, a biochemist at Jawaharlal Nehru University in New Delhi, who runs ethics classes agrees. “Lack of awareness about research ethics and lack of language skills lead students to plagiarize,” she says. “Writing assignments must be a mandatory part of as many courses as possible to enhance students' confidence in their ability to express themselves in writing.” No institution in India currently offers formal ethics courses, she says.

T. A. Abinandanan, an engineer at the Indian Institute of Science, says that the practice of duplicating information is deeply ingrained in Indian education. “Right from school our students are encouraged to take material from books and websites and use it in their charts and lab notebooks. In written answers, verbatim reproduction from textbooks is even rewarded with higher marks,” he told Nature. “Thus, when students start doing research, they have so much of this attitude to unlearn. This unfortunate case provides us yet another opportunity to redouble our efforts in training our students.”