The discovery of huge fields of submarine hydrothermal vents in the Southwest Indian Ocean is reason for both excitement and surprise: the area was thought to be largely devoid of such structures.

“We saw a lot of chimneys — some as tall as 20 metres — spewing out black smoke and teeming with life, and volcanic rocks glistening with beautiful golden sparkles. It was a magnificent view,” says Tao Chunhui, a marine geologist at the Second Institute of Oceanography in Hangzhou, China. Tao was the chief scientist on the 2007 China–US collaborative research cruise that first spotted the vents. 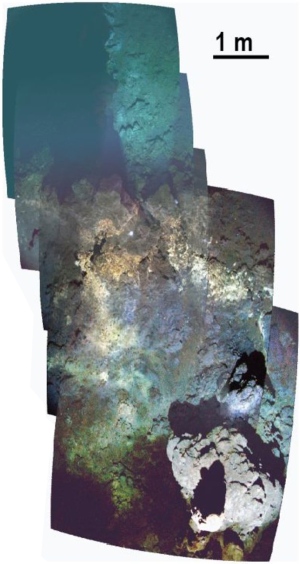 Composite image of one of the vents found on the Southwest Indian Ridge.

The finding, described in the January issue of Geology1, came as a surprise to many oceanographers. “You are not supposed to have a lot of vents in that part of the ocean,” says Paul Tyler, a deep-sea biologist at the National Oceanography Centre in Southampton, UK.

Most of the submarine hydrothermal vents known are the result of volcanic eruptions that take place when tectonic plates pull away from one another — giving rise to the 65,000 kilometres of mid-ocean ridges that zigzag around the planet like a network of giant zips.

For a long time, researchers thought that the number of vents in an area related to how fast a ridge was spreading. They calculated that for the slowest-spreading mid-ocean ridges — such as the Southwest Indian Ridge (SWIR) that separates the African and Antarctic plates, which are moving apart at less than 14 millimetres a year — there should be no more than one hydrothermal vent every 200–300 kilometres2.

The hypothesis was called into question when researchers, including the team responsible for the latest work, found plumes with unusual temperatures, turbidity and chemical composition in various areas of the SWIR that suggested hydrothermal activities3, 4. So, in early 2007, the team set out on a series of cruises aboard China’s ocean-exploration vessel Dayang Yihao to track them down.

An underwater robot called the Autonomous Benthic Explorer, which was owned and operated by the Woods Hole Oceanographic Institution (WHOI) in Massachusetts until it was lost during an expedition in 2010, performed systematic surveys of the ocean floor, measuring water properties, using sonar to generate detailed maps of the area, and taking high-definition pictures just metres from the seabed.

“We got much more than we had hoped for,” says Tao.

The hydrothermal vents that the researchers found are clustered in three areas, each about the size of a football field, at a depth of about 2,700 metres. “They are among the largest vent fields known,” says Jian Lin, a marine geophysicist at WHOI and leader of the US team.

The frequency of vents in the region, at about five vents per 200 kilometres, is also surprisingly high. However, Lin warns that this frequency may not apply to the whole of the SWIR because the studied region has an usually high level of magma supply. “It’s a hotspot on a cold ridge,” he says.

The researchers found a wide range of animals near the vents, including mussels, scaly footed gastropods, stalked barnacles and sea anemones. Some seemed to be new species, whereas others looked similar to those found at other vent sites in the Central Indian and southwestern Pacific Oceans, says Lin.

Late last month, Jon Copley of the University of Southampton led a team onboard the UK research vessel RRS James Cook in a comprehensive survey of fauna at the SWIR vent sites, known as the Dragon Vent Field, and came by a few more surprises. They found, for instance, a new crab species unknown at any other vents and sea cucumbers that had previously been found only in the Pacific.

Such information is crucial for working out how deep-sea creatures from different parts of the world evolved and how, genetically, they are linked to or separated from one another, says Tyler. “We know only a tiny fraction of [submarine] hydrothermal vents and there was a huge hole in the Southwest Indian Ocean,” he says.

The ISA has also granted permission to Russia to search for polymetallic sulphides along a section of the Mid-Atlantic Ridge and to Nauru and Tonga for exploration of polymetallic nodules — small rocks rich in iron and manganese — in a protected area in the eastern central Pacific.

This has sparked fresh debate about the need to balance scientific research, the demand for mineral resources and protection of deep-sea environments.

“Exploratory mining must be done with great caution and minimum impact on the environment,” says Lin.