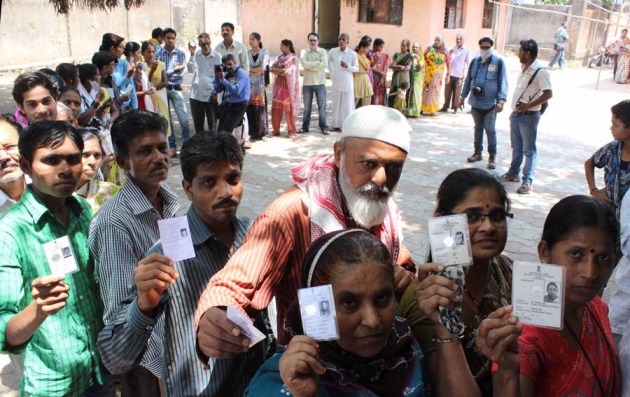 Voters queue for the polls in Nagpur, India, as part of the ongoing general election.

As India nears the end of its mammoth general-election process, research advocates warn that whichever party wins, the government must do more than pay lip service to science.

Nearly 815 million people are eligible to vote in the staggered election, which started on 7 April and will end with vote-counting on 16 May. But with two of the three main parties making scant mention of science in their manifestos, researchers fear that Indian science will not get the boost it needs to become internationally competitive.

The manifestos of the ruling Indian National Congress (often referred to as Congress), the Bharatiya Janata Party (BJP) and the new Aam Admi Party (AAP) give mixed clues to what science policies they would pursue.

Congress has supported science in the past, but makes few promises about research now. “Unfortunately, in the value system of both the government and our society at large, science is not at the top” — in fact, it may be at the bottom, says Chintamani Nagesa Ramachandra Rao, chairman of the Indian Scientific Advisory Council to the Prime Minister. 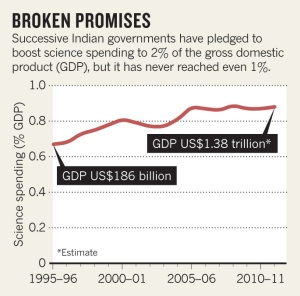 Congress does vow to increase annual science and technology expenditure from the current 0.9% of the gross domestic product (GDP) to at least 2%.But Raghunath Anant Mashelkar, former director-general of the Indian Council of Scientific and Industrial Research, notes that the 2% spending goal has been mooted by politicians from various parties since 1989. “We have still not crossed 1% for over two decades now, whereas others, such as [South] Korea, China et cetera are rapidly moving towards, or have already moved to, 3% and beyond in the same period.” (See ‘Broken promises’.)

Of the major parties, the BJP has devoted the most space to science and technology, health, energy and environment in its manifesto. The formulation of the document was chaired by physicist Murli Manohar Joshi, who was science and technology minister from 1998 to 2004, when the BJP was last in power.

The manifesto talks of reclaiming India’s ancient position as a global leader in science, and of creating a productive environment for fundamental research. It promises, for example, to set up world-class centres for nanotechnology, brain research and thorium-reactor technology for India’s nuclear-power programme.

Being globally competitive is the main challenge, says Rao. “We have to improve not just the quantity of output, but more importantly the quality of output in science,” he says, adding that India currently contributes no more than 1% of the top 1% of global research.

“We have very few islands of excellence in science, sometimes with a very subcritical number of world-acknowledged experts,” says Mashelkar.

The BJP manifesto also says that gains made by India during the party’s most recent stint in power — when it tested nuclear weapons — have been frittered away by Congress rule. “We will follow a two-pronged independent nuclear programme, unencumbered by foreign pressure and influence for civilian and military purposes, especially as nuclear power is a major contributor to India’s energy sector,” it promises.

Most opinion polls indicate that a coalition led by the BJP is likely to win the election with prime-ministerial candidate Narendra Modi. Some commentators are uneasy about this prospect. “The rise of Modi will spell a paradigm shift in Indian politics, with a tilt towards militant Hindu ideology or even explicit anti-minoritism, and will impact science adversely,” says Pushpa Mittra Bhargava, former director of the Centre for Cellular and Molecular Biology in Hyderabad. In 2004, Bhargava lost a Supreme Court case to halt the BJP government’s projects — led by Joshi — to introduce Vedic astrology and Hindu priestly rituals into universities.

The AAP, which is contesting its first general election, has a vigorous anti-corruption agenda. Its candidates include leading anti-nuclear activists and many physicians, but its manifesto is largely silent on science and technology. However, it does focus on management of natural resources such as coal and minerals, which have been at the centre of major corruption scandals in India. The AAP advocates a pivotal role for communities, promising that their consent would be needed to exploit local resources, and that they would share in profits.

Rao says that if India can make careful investments in particular areas of scientific research, it will be able to compete with countries such as China and South Korea in terms of patents acquired and high-quality publications produced.

But he warns: “The competition being very severe, it is my feeling that if India does not catch up in the next 10–15 years, it may become impossible to do so later.”