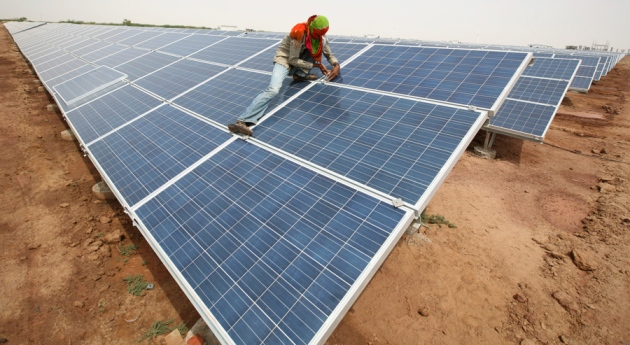 Photovoltaic arrays such as this one in Gujarat still produce only a small fraction of India's energy, but a new plant, to be built in Rajastan, aims to change that.

India has pledged to build the world’s most powerful solar plant. With a nominal capacity of 4,000 megawatts, comparable to that of four full-size nuclear reactors, the ‘ultra mega' project will be more than ten times larger than any other solar project built so far, and it will spread over 77 square kilometres of land — greater than the island of Manhattan.

Six state-owned companies have formed a joint venture to execute the project, which they say can be completed in seven years at a projected cost of US$4.4 billion. The proposed location is near Sambhar Salt Lake in the northern state of Rajasthan.

The solar photovoltaic power plant will have an estimated life of 25 years and is expected to supply 6.4 billion kilowatt-hours per year, according to official figures. It could help to reduce India's carbon dioxide emissions by more than 4 million tonnes per year, estimates Parimita Mohanty, a fellow at the Energy and Resources Institute (TERI) in New Delhi.

India currently has a grid-connected solar-power capacity of 2,208 MW — up from a mere 17.8 MW in 2010, when the central government launched the Jawaharlal Nehru National Solar Mission (JNNSM). The JNNSM aims for India to reach an installed capacity of 20,000 MW (or 20 gigawatts) of solar power by 2022 (see 'India embarks on solar drive'). 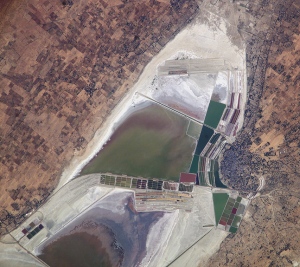 Lake Sambhar, where salt has been harvested for centuries, is the designated site of the new power plant.

“If things go according to plan, we might well surpass that figure,” says Tarun Kapoor, chief of the JNNSM and joint secretary in India’s Ministry of New and Renewable Energy.

The production cost of solar power in India has fallen by more than half in recent years, from 17 rupees ($0.27) per kilowatt-hour (kWh) three years ago to 7.50 rupees per kWh currently, according to Kapoor, and it could plummet further. But these costs are still high compared to coal (2.50 rupees per kWh), nuclear (3 rupees per kWh) or natural gas (5.5 rupees per kWh), says Mohanty.

India is mapping its potential for solar-energy production across the entire country on the basis of satellite imagery, in collaboration with the United States. It has also set up 51 dedicated measurement stations to assess the availability of solar radiation, adding to data collected by 45 meteorological observatories.

But the ostensibly green mega-project has been criticized by environmentalists. “We don’t think this should be the way to go ahead,” says Chandra Bhushan, deputy director-general of the think tank Center for Science and Environment in New Delhi. “Feeding 4,000 MW into an already leaking grid where 20% of electricity gets wasted in transmission and distribution losses and [most] ends up feeding the urban centres makes little sense,” he says, adding that less than 50% of Indians living in villages have access to electricity.

Bhushan says that a decentralized solar approach, with multiple smaller projects spread over rural areas, would have a far greater reach, a larger social benefit and bigger human-development impact than a gargantuan plant feeding the grid. India's population is comparable to China's but its electricity consumption is only about one-quarter of China's, according to the US Energy Information Administration.

Rajendra Pachauri, director-general of TERI and chairman of the Intergovernmental Panel on Climate Change, says that the JNNSM should keep pushing on both the large-scale and decentralized approaches. “India must see itself emerge as the worldwide leader in harnessing solar energy involving technologies for centralized power generation, as well as millions of small, decentralized applications.”