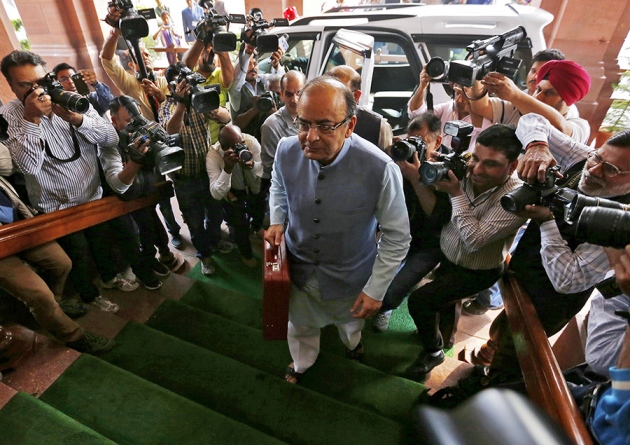 India’s finance minister Arun Jaitley arrives at the parliament to present the latest federal budget, which contained a moderate boost for biotechnology.

An ambitious plan to turn India into a world-class centre for genomics research and commercialization received a modest boost on 29 February when the government announced its annual budget.

A big winner in the budget was India’s main science funding agency, the Department of Science and Technology, which received 44.7 billion rupees (US$650 million), a 17% hike on last year’s allocation. The Department of Biotechnology (DBT), meanwhile, received 18.2 billion rupees, a 12% rise on the previous year — an indication of how the National Biotechnology Development Strategy, which the department unveiled last December, is likely to evolve.

The budget brought mixed news for other departments engaged in scientific research (see ‘Budget allocations’). The Department of Health Research’s budget represented a 12% rise in funding compared with the money pledged in 2015–16, for instance, whereas the Department of Space got an increase of less than 2%.

The DBT’s allocation is roughly half of what Krishnaswamy VijayRaghavan, the department’s secretary, estimated was needed when the strategy was released — but he is confident that the remainder can be made up from other sources. The allocation is “very good” in terms of implementing the strategy, he told Nature.

The DBT’s strategy aims to ramp up India’s total biotech revenues by more than tenfold since the industry started up two decades ago, to $100 billion by 2025. The idea is to kick-start the economy by replicating the success of the information-technology boom that has fuelled economic growth for more than 20 years. “Biotechnology can be another vibrant model for growth that India can offer,” said the science minister, Harsh Vardhan, back in December.

India’s pharmaceutical industry is largely confined to the production of ‘generic’ copies of existing drugs, and to contract research organizations, which conduct clinical trials of drugs and vaccines on behalf of pharmaceutical companies. Both have grown into successful industries, says VijayRaghavan, but the nation “is now ready to upgrade its biotech capabilities”.

The DBT received an encouraging sign last year, when its budget allocation for 2015 was not subsequently slashed during mid-term budget revisions, as often happens. The latest 12% increase builds on that good news, says VijayRaghavan. Ahead of this year’s budget, however, VijayRaghavan said that this figure would need to rise to 25–30% annually over the next five years to implement the strategy.  He now says that the DBT could make up the difference with funds from elsewhere, including a national innovation mission launched in January, which identified biotechnology as a key area — in particular, to bolster the parts of the strategy aimed at nurturing biotech start-ups and supporting entrepreneurs.

The DBT could also tap into the science department’s budget. Department secretary Ashutosh Sharma, who described the increase as “fantastic”, says that his department’s plans include a rise in the number and quality of start-ups and business incubators, support for scientists undertaking high-risk research, the promotion of industry-relevant research at academic institutes and new research programmes on, among other things, biomedical devices. 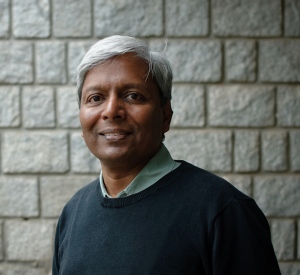 “India is now ready to upgrade its biotech capabilities.” Krishnaswamy VijayRaghavan, secretary of the Department of Biotechnology.

Some of these plans overlap with the DBT’s strategy. Ahead of the budget announcement, VijayRaghavan told Nature that the strategy revolves around three core activities. The first is the creation of new infrastructure. India already hosts several genomics research institutes, such as the Institute of Genomics and Integrative Biology (IGIB) and the National Institute of Plant Genome Research, both in New Delhi, and the National Institute of Biomedical Genomics near Kolkata. The DBT’s strategy aims to create five more centres, each dedicated to a different field, including drug discovery, marine biology and infection, as well as several centres of excellence based on narrower, high-priority areas such as genetically modified organisms, vaccines and marine bioproducts.

The second activity is the provision of training in the analysis of big data. Indian geneticists have previously discovered mutations in breast-cancer genes that are unique to the Indian population (M. T. Valarmathi et al. Hum. Mutat. 23, 205; 2004) and sequenced the genomes of several crops, including chickpea (R. K. Varshney et al. Nature Biotechnol. 31, 240–246; 2013). The DBT’s strategy aims to train researchers in the scanning and analysis of large numbers of genomes. VijayRaghavan notes that the country’s existing expertise in computing and biology will help this. “We need to bring the two skill sets together,” he says.

The strategy also aims to create 150 technology-transfer organizations to help to commercialize discoveries made in publicly funded research laboratories, together with 40 technology and business incubators, which will provide equipment and guidance for new firms, and facilitate networking opportunities. Together, these all comprise the third core activity, says VijayRaghavan, and will build on the activities of the DBT’s Biotechnology Industry Research Assistance Council, which was set up in 2012.

Lipi Thukral, a computational structural biologist at the IGIB, sees the DBT’s goal of creating a genomics hub as an opportunity for India to enter the emerging field of precision medicine, which uses genomic, physiological and other data to tailor treatments to the individual. Achieving that will require clinicians to gather extensive data and to interact better with academics to analyse the data, says Thukral. To succeed, the strategy will also need a feedback mechanism between the biotech corporate sector and academic institutions, policies to protect scientists undertaking high-risk, high-reward research and a reorientation of academia towards more industry-relevant research, she adds.

Others have reservations about the scale of the DBT’s ambitions. “The strategy seems overwhelming, overburdened, and implementation would be a Herculean task,” says Nalini Vemuri, vice-president for research and development at the Gurgaon-based company Lifecare Innovations. The strategy spans four major areas — health care, food and nutrition, energy and education. But although these represent an “impressive vision”, says Vemuri, a more narrowly focused goal, for example to improve the country’s research in malaria and tuberculosis, would have a better chance of success.

A footnote has been added to the Budget Allocations table regarding the 2016–17 figures for the Ministry of New & Renewable Energy.