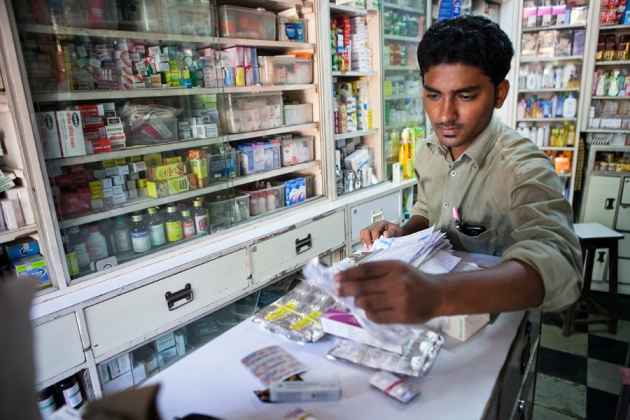 Kumar Prabhash’s voice is sombre as he describes how he is losing a key weapon in the fight against hospital infections. At the Tata Memorial Centre in Mumbai, where the oncologist works, at least half of bacterial samples from patients with infections are resistant to carbapenems — a class of ‘second-line’ anti­biotics used to treat infections that are already resistant to other drugs. Just a few years ago, the resistance rate in such samples was only 30%. “That is really scary for us,” says Prabhash.

Antibiotic resistance is a problem worldwide, but is particularly worrying in India, where hospital standards are inconsistent and antibiotics are readily available over the counter at pharmacies. Prabhash’s story was all too familiar to the physicians who heard it at India’s first joint medical-society meeting on anti­biotic resistance, held on 24 August in Chennai. The symposium is part of an ongoing campaign by Indian clinicians for a national policy to curb misuse of these vital drugs.

“As physicians, we have a responsibility for the future of India,” said J. A. Jayalal, who represented the Indian Medical Association at the meeting. “If we’re not raising our voices about this, future generations will not forgive us.”

Last week, physicians moved a step closer to their goal when India’s drug regulators announced a plan that would put tight restrictions on the sale of antibiotics. Carbapenems and many other antibiotics are already on a list of 536 drugs in India that require a prescription. But studies have shown that such drugs are easy to purchase at retail pharmacies without a physician’s signature (U. P. Rathnaker et al. J. Clin. Diagn. Res. 6, 951–954 (2012) and A. Kotwani et al. J. Clin. Pharm. Ther. 37, 308–312; 2012). Under the new regulations, carbapenems and other antibiotics with declining efficacy would be treated as a special category of prescription drugs. They would carry prominent red labels, and surprise inspections by the regulator would check whether pharmacies were selling them over the counter.

Drug misuse is a key factor that leads to antibiotic resistance, says Arjun Srinivasan, a medical epidemiologist at the US Centers for Disease Control and Prevention in Atlanta, Georgia. A patient’s risk of developing a life-threatening infection that is resistant to carbapenems is 15 times greater if he or she has been exposed to the drug class before, he notes. “Improved antibiotic use will be essential to combat drug resistance,” he adds.

There is ample evidence of excessive carbapenem use in India. A survey (go.nature.com/rpsg2r) published earlier this year by the Center for Disease Dynamics, Economics and Policy, a non-profit health-research organization headquartered in Washington DC, found that Indian pharmacy sales of carbapenems increased by nearly six times between 2005 and 2010 (see ‘Antibiotics for all’). 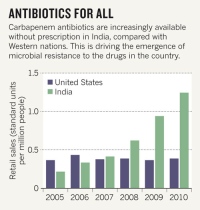 Limited access to basic medical care is one reason for the overuse of carbapenems and other second-line antibiotics. About 70% of India’s 1.2 billion citizens live in rural areas, where, despite government efforts, hospitals are often understaffed and lacking basic equipment and medication. Rather than relying on physicians, many rural patients turn to local pharmacists and whatever drugs they have in stock.

In 2010, India’s government created a task force to develop a national antibiotic policy. But last year, Indian health minister Ghulam Nabi Azad rejected the task force’s recommendations to ban over-the-counter sales of anti­biotics and prohibit the use of carbapenems and other second-line antibiotics except in major hospitals. Azad argued that the bans could have a devastating effect on health in rural areas.

The health ministry did not respond to Nature’s questions about the latest recommendation from India’s drug regulator, but a health-ministry representative told the Times of India that the office did intend to approve the anti­biotic restrictions, possibly as early as this week.

Infectious-disease specialist Abdul Ghafur, who organized the joint society meeting in Chennai, hopes to use momentum from the latest restrictions to push for a national anti­biotic policy to regulate India’s 24,000 hospitals and hundreds of thousands of physicians, as well as its pharmacies. “I am now trying to follow up with the health minister’s office to arrange a meeting with the various medical societies,” he says. “There are still many more steps ahead.”