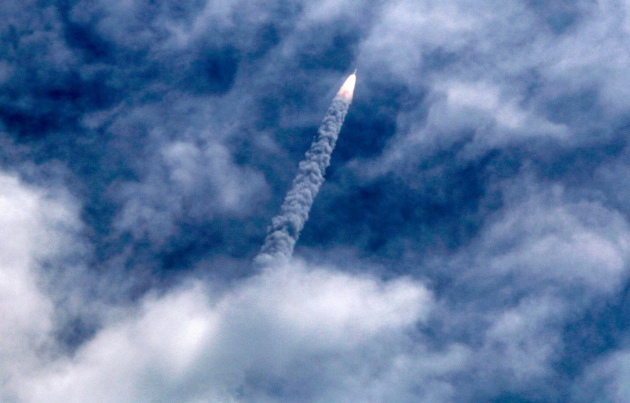 A 320-tonne Indian-built PSLV rocket heading for space with the ASTROSAT observatory on board.

India’s first satellite dedicated to astronomy, ASTROSAT, blasted off into space on 28 September from the spaceport of Sriharikota, an island in the Bay of Bengal, equipped with five instruments to study astrophysical phenomena over a wide range of wavelengths simultaneously.

ASTROSAT, which has a mission life of five years, is armed with telescopes that will simultaneously study the space in visible light, ultraviolet (UV) and low- and high-energy X-rays. It is also carrying an X-ray scanning sky monitor to detect transient X-ray emissions and γ-ray bursts. The observatory aims to study star-birth regions and high-energy processes, including binary star systems of neutron stars and black holes (see 'Indian ASTROSAT telescope set for global stardom').

ISRO Satellite Center (ISAC) director Mylswamy Annadurai says that the sky scanner will start gathering data in a few days, followed by the four telescopes. The UV telescope will be the last to come online, in two months' time.

The Indian Space Science Data Centre in Bangalore will be the initial repository of all raw data, which it will then distribute to four operation centres around the country.

Expectations are high among astronomers in India and abroad. “ASTROSAT opens a new chapter in Indian space astronomy,” says Swarna Kanti Ghosh, director of the National Centre for Radio Astrophysics and a member of the mission’s science working group. “We can write our research proposals for UV and X-ray astronomy directly to ASTROSAT” without having to depend on observatories abroad, he says.

Also hitching a ride on the PSLV were six small satellites for maritime surveillance — one from Indonesia’s National Institute of Aeronautics and Space, one from Canada’s University of Toronto and four from US aerospace start-up Spire Global.