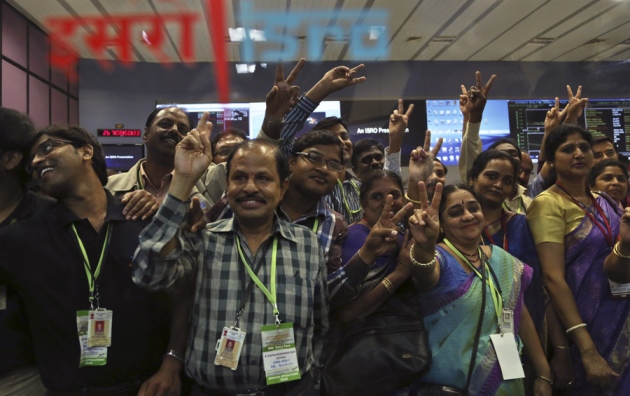 India joined the distinguished club of Mars explorers on 24 September, as its Mangalyaan probe manoeuvred into the red planet's orbit according to plan. Until then, only the United States, the former Soviet Union and the European Space Agency had conducted missions that successfully reached Mars. India's space programme is the first to do so on its first attempt.

“History has been created today,” declared Indian Prime Minister Narendra Modi at the Indian Space Research Organisation (ISRO) mission control room in Bangalore. “The odds were stacked against us but we have prevailed and have achieved the near impossible,” he added.

As the news of the probe's successful insertion into orbit poured in, the ISRO control room erupted into thunderous applause, with scientists shaking hands, hugging and distributing sweets.

Mangalyaan, known formally as the Mars Orbiter Mission (MOM), has been hailed as one of the least expensive interplanetary endeavours in recent history, costing US$75 million — less than the price of producing space-based Hollywood film Gravity, as Modi has pointed out.

But former ISRO chairman G. Madhavan Nair warns that if ISRO were to launch a mission of similar to one of NASA's in scope and depth, it would end up spending many times more.

Mangalyaan carries five instruments to study the planet’s geology and evolution, and to look for methane, a signature of life. Some observers however view its scientific objectives with caution. “Some of this is hyped up and overstretched,” says Amitabha Ghosh, an India-born planetary geologist based in Washington DC. “I am sceptical that MOM will be able to dwell decisively on present or past life on Mars.”

Ghosh says that MOM is unlikely to supply data comparable in breadth or quality to those generated by other recent missions. He finds it unlikely that MOM will add anything significant to our understanding of Martian topography, for instance, given that NASA's Mars Global Surveyor has already taken 640 million elevation measurements and mapped the planet in detail.

However, ISRO describes MOM not as a science mission, but as a “technology demonstrator”.

Some policy experts say that India's space programme is also relevant to its national security, especially given that China has ramped up its space capabilities and in the past has tested anti-satellite weapons. “Military dimensions of China’s space programme also carry strategic significance for India,” warns Brahma Chellaney, a strategist with the Centre for Policy Research think tank in New Delhi.

India and China signed civilian space-cooperation agreements during Chinese President Xi Jinping’s visit to India in mid-September, even as renewed tension simmered along the border between the two countries.

China and Japan have previously made ill-fated attempts to reach Mars, with the Yinghuo-1 and Nozomi probes respectively.