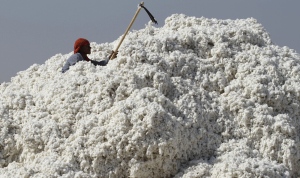 More than 90% of the cotton grown in India is transgenic Bt cotton.

A failed variety of genetically modified cotton developed in India is the focus of an investigation by the Indian Council of Agricultural Research (ICAR) in New Delhi. The council is looking into claims that some of its scientists may have misled the government over genetic contamination in the crop.

ICAR’s version of the cotton — incorporating the cry1Ac gene from the soil bacterium Bacillus thuringiensis (Bt), which makes the cotton toxic to bollworms — was withdrawn after one season in 2009 because of its poor performance in the field. But it has since come to light that the strain contained the gene within a longer stretch of DNA sequence known as MON 531, owned by the agricultural giant Monsanto.

"We have launched the probe because our tests have shown that the so-called indigenous Bt cotton actually contains Monsanto's gene and the researchers have no explanation how it got there," Swapan Kumar Datta, ICAR's deputy director-general, told Nature. He would not comment on whether he thought it was a case of deliberate scientific fraud, or accidental contamination.

Monsanto's spokeswoman Michelle D’Souza declined to comment, saying: "It is an internal matter of ICAR."

The three-member investigative committee, led by Sudhir Sopory, a plant molecular biologist and vice-chancellor of Jawaharlal Nehru University in New Delhi, will report back within three months.

Bt cotton accounts for 93% of cotton grown in India, and the vast majority (97%) is sold or licensed by Monsanto. But Monsanto's seeds are expensive and, like other hybrids, lose vigour after one generation, requiring farmers to buy new stocks every year. ICAR wanted to develop a cheaper Bt variety with seeds that could be reused.

In 2000, ICAR's National Research Centre on Plant Biotechnology (NRCPB) in New Delhi provided the University of Agricultural Sciences (UAS) at Dharwad in Karnataka with the cry1Ac gene construct to begin work on its own transgenic cotton. While Basavaraj Khadi of the UAS coordinated the project, the Central Institute for Cotton Research (CICR) in Nagpur was tasked with testing and commercializing the product.

In 2001, the project's principal investigator, Ishwarappa Katageri of the UAS, announced the successful transformation of the native Bikaneri Narma (BN) variety into a transgenic cotton carrying the cry1Ac gene construct. Khadi became director of the CICR in May 2005, taking with him the BN-Bt seeds for biosafety studies in preparation for commercial release.

Keshav Kranthi, current director of the CICR, analysed the seeds at the time. He says that he told Khadi as early as August 2005 about the presence of the Monsanto gene in BN-Bt and a "potential scandal" if the cotton was released commercially. But the warning seems to have gone unheeded, and India’s Genetic Engineering Approval Committee — of which Khadi was a member — approved BN-Bt for release in May 2008. Farmers started planting it in 2009, but its poor performance in the field and Kranthi's warning that its commercialization would have “serious repercussions” in the future led Datta to suspend production and sale of the BN-Bt seeds in December of that year.

The controversy came to light on 27 December last year after Chidanand Mansur, a professor at the UAS, provided The Indian Express newspaper with documents he obtained under freedom of information laws.

Chavali Kameswara Rao, executive secretary of the Foundation for Biotechnology Awareness and Education in Bangalore, says that the situation is “a huge embarrassment for ICAR and a blow to the credibility of India’s public-sector cotton research".

"Too much pressure on the public sector to deliver quickly is one reason why such things happen," says Sateesh Kumar, managing director of Prabhat Agri Biotech seeds in Hyderabad, one of the first companies to find that the seeds it sourced from the CICR "were the same as Monsanto seeds".

Because the matter is the subject of an ongoing investigation, Khadi declined to comment in detail on why the project went ahead despite Kranthi’s warnings. "My job was only coordination and promotion," he told Nature, adding that the Monsanto gene probably came from pollen-borne contamination — a claim dismissed by CICR scientists, whose tests in 2008 showed that the BN-Bt seeds contained only the Monsanto gene and not the UAS version.

Polumetla Ananda Kumar, the director of the NRCPB who originally provided the cry1Ac gene to the UAS, disputes the CICR findings. He says that he has worked with the UAS to purify the seeds by removing the Monsanto gene, and that they still contain the UAS version of the gene, known as BNLA106. This shows, he says, that the contamination probably arose through a mistake during breeding. “I have done it to my satisfaction but it has to be endorsed by the Sopory committee."

Sopory says that he will examine the data with the scientists. "If necessary we will do some experiments. But we will definitely get at the truth."

This article originally stated that Monsanto's Bt cotton seeds become sterile after one generation. They are not sterile, but like other hybrids lose vigour and so must be replaced each year. The text has been corrected to reflect this.