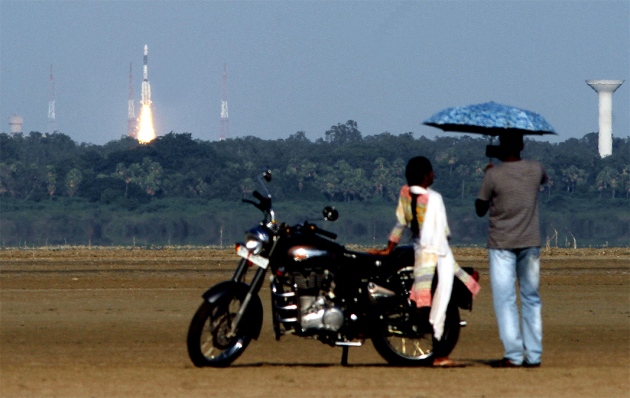 India’s Chandrayaan-2 moon mission is scheduled to launch next March from the spaceport of Sriharikota.

In a large shed near the headquarters of the Indian Space Research Organisation (ISRO) in Bangalore, a six-wheeled rover rumbles over dark grey rubble in a landscape designed to mimic the Moon’s rocky surface. This test and others scheduled for the next few weeks are crucial steps in India’s quest to launch a second mission to the Moon next March.

The country’s much anticipated Chandrayaan-2 comes almost a decade after India began its first journey to the Moon, in 2008. “It is logically an extension of the Chandrayaan-1 mission,” says Mylswamy Annadurai, director of the project at ISRO. The spacecraft comprises an orbiter that will travel around the Moon, a lander that will touch down in a as-yet undecided location near the Moon’s south pole and a rover.

India’s maiden Moon trip was a significant achievement for its space programme, but ended prematurely when ISRO lost contact with the orbiter ten months into the planned two-year mission. However, an instrument on a probe that reached the Moon’s surface did gather enough data for scientists to confirm the presence of traces of water.

Chandrayaan-2 will attempt more ambitious technical manoeuvres that will put Indian space technology to the test. For the first time, ISRO will attempt to give a craft a controlled, or soft, landing. The agency has had to develop advanced systems that can guide the lander to a touch down and successfully deploy the rover.

Lunar missions are also being planned by China, Japan and other countries, among others. Like these, India’s explorations are partly driven by the need to improve understanding of the Moon’s environment in the event that governments or private entities decide to establish a human settlement there. One poorly understood phenomenon is floating lunar dust. Without an atmosphere like Earth’s, the surface of the Moon is buffeted by solar wind and ultraviolet radiation, creating a layer of charged ions called a plasma sheath in which dust particles can levitate.

If humans colonize the Moon, this dust will be a significant challenge, says planetary scientist Penny King of the Australian National University (ANU) in Canberra. It gets into everything, from astronauts’ suits to machinery and equipment, where it causes damage, she says. “Understanding how it moves around is pretty critical.” ISRO says the Chandrayaan-2 orbiter and lander will carry a first of its kind instrument, called the Radio Anatomy of Moon Bound Hypersensitive ionosphere and Atmosphere (RAMBHA), to measure the density of the near-surface plasma and how it changes over time.

The rest of the spacecraft’s suite of instruments will collect data to help scientists study other aspects of the Moon’s present environment and how it has evolved. Chandrayaan-2’s lander will take the first on-site thermal measurements on the lunar surface near a polar region. The mission “is expected to further consolidate the findings from the first mission and add new ones with in situ analysis of the lunar surface and ionosphere,” says Annadurai, who is also director of ISRO’s Satellite Centre in Bangalore.

ISRO plans to execute its mission on shoestring budget of just 6.03 billion rupees (US$93 million), including the cost of the rocket and launch. Chandrayaan-2 will be carried into space on one of the agency’s three-stage rockets, a Geosynchronous Satellite Launch Vehicle Mark II, taking off from a spaceport on the island of Sriharikota in the Bay of Bengal. “A nice part of the Indian space programme is that they manage to do things so cheaply,” says ANU astrobiologist Charles Lineweaver. “If it succeeds, maybe everyone else will see that their mission didn’t really need that extra bell or whistle.”

In three to four weeks, ISRO will begin one of the final and most complex testing phases for Chandrayaan-2, integrating all of its components. With one Moon mission under its belt, ISRO is settling into its role as a moon-faring organisation. “Maybe we were extra anxious with the first child, as parents. But we relax a bit as more children come along,” he jokes.