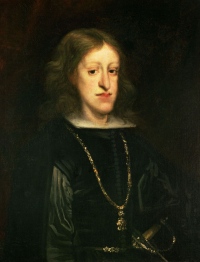 The infertility of King Charles II of Spain (1661-1700) may have been evolution's way to weed out bad genes from his highly inbred dynasty. (Portrait is an oil on canvas by Don Juan Carreno de Miranda from the Prado museum in Madrid.)

King Charles II of Spain was physically and mentally disabled, infertile — and extremely inbred. When he died in 1700, aged 38, so did the male line of the Spanish Habsburg royal family, as famous for their pointed jaws as for their extreme consanguinity.

A provocative analysis now suggests that the Habsburg royal family might have evolved under natural selection over three centuries to blunt the worst effects of inbreeding. Evolutionary theory predicts such a 'purging' process, and researchers have documented the effect in animals and plants. But evidence among humans is scant — in part because of the dearth of data on inbred families spanning many generations.

Royal families such as the Habsburgs are an ideal place to look, says Francisco Ceballos, a geneticist at the University of Santiago de Compostela in Spain, who led the research. He and colleague Gonzalo Álvarez used written records to track the marriages, births and deaths of 4,000 individuals across more than 20 generations. “The royal dynasties of Europe are a lab of inbreeding for human populations,” says Ceballos. The team's study is published this month in Heredity1.

The Habsburg pedigree resembles the organizational flowchart of a dysfunctional government agency. Inbred marriages, such as those between first cousins or between uncles and nieces, were the rule rather than exception. Such pairings, which include the marriage between Philip II of Spain — Charles II's great-grandfather — and his niece Anna of Austria, were used to keep titles in the family and to forge political alliances.

In a 2009 paper2, Ceballos and Álvarez showed that the extent of inbreeding increased over the reign of the Habsburgs, so that Charles II was more inbred than is typical of a child of a brother and sister. Moreover, inbreeding was probably to blame for the high rates of disease and early deaths in the family.

Inbreeding increases the odds that offspring inherit two copies of a recessive mutation that causes disease. Charles, for instance, was believed to suffer from at least two conditions caused by recessive mutations in different genes: pituitary hormone deficiency (which can result in infertility) and distal renal tubular acidosis, a cause of kidney failure.

Charles's infertility kept such mutations from being transmitted to subsequent generations, at least along his lineage. To determine indirectly whether other harmful mutations had been weeded out of the Habsburg family — including branches that outlived the Spanish Habsburgs — Ceballos and Álvarez counted deaths during infancy (birth to age one, excluding miscarriages and stillbirths) and childhood (ages one to ten) in the family’s history. The team recorded 502 pregnancies that resulted in 93 infant deaths and 76 childhood deaths.

The researchers hypothesized that early deaths were likely to have been caused by the ill effects of inbreeding; if natural selection had purged the family of harmful mutations, then such deaths would become less frequent over time. It would be especially easy to spot such a trend in a royal family: demographic studies suggest that although infant and child death rates changed a lot in the general European population between 1500 and 1800, they were mostly stable among the nobility. Royals were sheltered from many causes of death, says Ceballos. “They didn’t suffer from wars or from hunger.”

Ceballos says that his team found evidence that the Habsburgs evolved to cope with inbreeding: there were substantially more deaths — when measured after controlling for inbreeding — among the family's children between 1450 and 1600 than there were between 1600 and 1800. Perplexingly, however in infants the same measure of mortality increased.

Alan Bittles, a geneticist at Murdoch University in Perth, Australia, is surprised that older Habsburg children would be most likely to experience the harmful effects of inbreeding. “Our data would suggest that the major adverse effect of consanguineous marriage is expressed in the first year of life,” he says.

Leonid Kruglyak, a population geneticist at Princeton University in New Jersey, is not convinced that natural selection is behind the changes in mortality. He says that the results are more likely to be a statistical fluke caused by small sample sizes.

South India might be a better place to look for evolution in response to inbreeding, says Bittles, because consanguineous marriages are common among some populations and genealogical records go back for generations.

Ceballos is now looking at other effects of inbreeding in the Habsburgs, such as changes to fertility. He is also probing other royal families, including the French House of Bourbon.