Conflict between women and their daughters-in-law could be a factor in explaining an evolutionary puzzle — the human menopause.

Humans, pilot whales and killer whales are the only animals known to stop being able to reproduce long before they die. In terms of evolution, where passing on your genes is the main reason for living, the menopause remains puzzling. 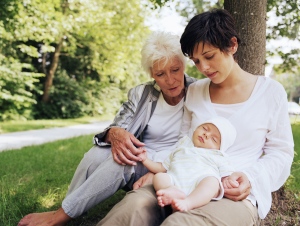 Mothers-in-law can help to care for their grandchildren — unless they have their own children at the same time.

Now, using a large data set from Finland, researchers have for the first time been able to test a hypothesis that competition between different generations of genetically unrelated breeding women could have promoted the evolution of the menopause. The results are published today in Ecology Letters1.

Mirkka Lahdenperä, an ecologist at the University of Turku in Finland, and her colleagues used data from meticulous birth, death and marriage records kept by the Lutheran church in the country between 1702 and 1908. As they dug into the data, the researchers found that the chances of children dying increased when mothers-in-law and daughters-in-law gave birth around the same time. For children of the older women, survival dropped by 50%. For children of the daughters-in-law, it dropped by 66%. However, if mothers and daughters had children at the same time, the survival of those children wasn’t affected.

The results suggest that it would be beneficial to stop having children once your daughter-in-law entered the fray. “We were surprised that the result was so strong,” says Andrew Russell, an ecologist at the University of Exeter, UK, who was part of the research team. He suggests that perhaps in-laws fought over food for their children instead of cooperating as mothers and daughters might.

Other theories to explain the menopause include the mother hypothesis, which suggests that older women have an increased chance of dying in childbirth, and the grandmother hypothesis — that the benefits to the family when women care for their grandchildren provide an evolutionary reason to stay alive after reproductive age.

Using an inclusive-fitness model, which counts the number of gene equivalents passed from generation to generation, the team showed that when mothers and their sons' wives had children at the same time, there was strong selection against women remaining fertile past the age of 51.

Michael Cant, an evolutionary biologist at the University of Exeter, developed2 the intergenerational conflict theory with Rufus Johnstone, a zoologist at the University of Cambridge, UK, in 2008. He is pleased that the theory has been tested. “I’m stunned by the size of the effect,” says Cant. “The problem with most ideas about human life-history evolution is they’re so difficult to test.” By incorporating both grandmothering and conflict to explain menopause, “you get to the point where it makes sense”, he says.

However, the effects studied in the Finnish data set aren’t the only possible contributing factors to menopause, says Tom Kirkwood, who studies ageing at Newcastle University, UK. Kirkwood thinks that “menopause will turn out to have multiple lines of explanation”, including some based on physiology. For example, to continue reproducing past the current age of menopause, humans would need larger ovaries that could produce viable eggs for longer.

There is still a lot of work to be done, adds Cant. “Why is menopause hard-wired and inflexible? Why haven’t we evolved the ability to switch off breeding in a flexible way?” he asks.

Russell agrees that a lot more testing is needed to understand the menopause, but not just for scientific completeness. “If one day we are considering the possibility of reversing menopause medically, understanding the implications of this will require understanding what got us there in the first place,” he says.