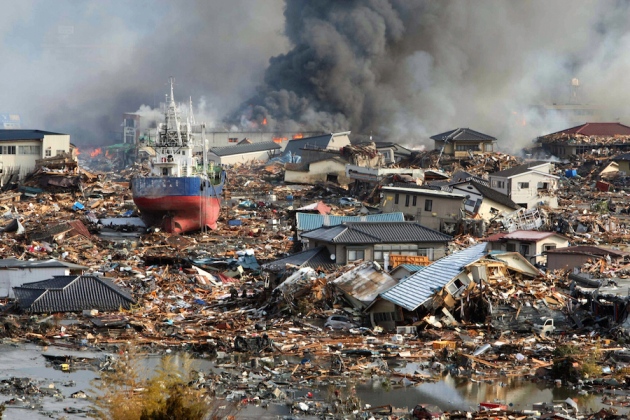 Clusters of tiny earthquakes that happen every three years could help to signal when the next big one will hit Japan, researchers report in Science1.

Small, subtle quakes happen in many places where a slab of sea floor dives beneath a continent, such as in the US Pacific Northwest or off the coast of Chile. But the study of seismic activity in Japan is the first to show that they happen in regular episodes, and that those events can precede larger earthquakes.

If the same patterns hold in other earthquake-prone regions, they could improve seismic risk estimates there, too.

“This is a very important finding,” says Akira Hasegawa, a seismologist at Tohoku University in Sendai, Japan, who was not involved in the research.

A team led by Naoki Uchida, who is also a seismologist at Tohoku University, used data from seismometers that blanket most of Japan. The scientists examined 6,126 earthquakes of magnitude 2.5 or larger that came in groups between 1984 and 2011.

These repeating earthquakes happen on the geological fault where two crustal plates meet. They show that the plates must be creeping past one another gently, in an almost imperceptible motion known as slow slip. Every so often, the slow slip gives way and a much larger earthquake occurs.

Geologists had known that slow slip happens off Japan, and that it can precede monster quakes. It may have helped to trigger a magnitude-9 earthquake that devastated the northeastern Tohoku coast in 2011, and caused a tsunami that flooded the Fukushima Daiichi nuclear plant2.

Uchida and his colleagues have now discovered that slow slip happens in cycles every 2.7 to 3 years off the coast of northeastern Japan. “The results suggest that slow-slip events occur more frequently” than previously realized, says Uchida.

In this region, slow slip also happens around the same time as, or just before, a spike in the rate of earthquakes of magnitude 5 and greater. Slow slip may gradually build up stresses along the fault and eventually trigger it to move in the larger quake, Hasegawa says.

Because the 2011 Tohoku earthquake relieved geological stress, Uchida says, that particular section of the fault is not likely to move in a large earthquake any time soon. But by monitoring slow slip to the north and south of Tohoku, seismologists may get a better idea of how much stress is building there and when a large earthquake is likely to strike again. “It means earthquake probabilities should be raised during times of accelerated [slow] slip,” says Gavin Hayes, a seismologist with the US Geological Survey in Golden, Colorado.

Slow slip has happened before other large earthquakes, such as the magnitude-8.1 Iquique earthquake in Chile in 20143. In 2014, off the coast of Guerrero, Mexico, a magnitude-7.2 earthquake occurred about two months after slow slip began, says Mathilde Radiguet, a seismologist at ISTerre Institute of Earth Sciences in Grenoble, France.

And slow slip is common along the Pacific Northwest coast, a spot thought to be ripe for a large earthquake in the zone known as Cascadia. For the past five weeks, in a fairly common occurrence, tiny quakes have been marching south from Vancouver Island and into Washington state. “It is key for us to know as much as possible about unsteady slow slip in Cascadia,” says Heidi Houston, a seismologist at the University of Washington in Seattle.

But Japan has a huge advantage over other areas where slow-slip occurs, says Susan Schwartz, a seismologist at the University of California, Santa Cruz. The country’s seismological network is so dense that it can detect faint signals, such as the periodic slow slip, that might never be seen in less-well-instrumented areas.