Drugs that unleash the power of the immune system on cancers are generating considerable optimism in industry, but still Andrew Baum thinks analysts are selling them short. In a 22 May report, Baum, the London-based head of global health-care research at the investment bank Citi, forecasts that in ten years the drugs will be treating 60% of cancers and earning US$35 billion a year.

Three elements contribute to his bullishness: the drugs are showing signs of wider effectiveness; many patients will take them for years; and the prices are stratospheric (see ‘Stiff medicine’). 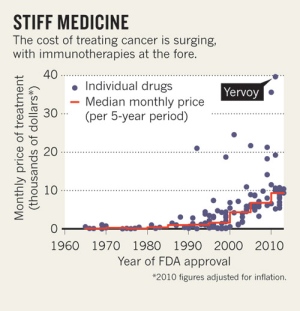 One of the first such drugs to be approved, Yervoy (ipilimumab), costs about $40,000 per month in the United States, and £15,000 ($23,000) in the United Kingdom, where health-care officials negotiated a lower price. So far, expensive immunotherapies have been approved only for treating melanoma and prostate cancer. But this weekend, at the annual meeting of the American Society of Clinical Oncology in Chicago, Illinois, investigators will present promising results from trials that indicate that immunotherapies could soon have a role in treating cancers of the lung, kidney and stomach.

A new strategy will add to the costs: regimens that combine the drugs with radiation therapy, genetically targeted drugs and other immunotherapies. The hope is that these other treatments will enhance the ability of the immune system to recognize the tumour, either by further stimulating the immune system, or by damaging the tumour so as to release antigens that the immune system recognizes.

Yervoy, made by Bristol-Myers Squibb, headquartered in New York, is remarkable because a three-month course can send cancer into remission for years (see go.nature.com/k1e3m2). However, only about one-quarter of patients with advanced melanoma responds to the drug, which spurs tumour-killing T cells into action by blocking an inhibitory signal. “When Yervoy was first approved in 2011, we all recognized that it was an important moment for the field,” says Jedd Wolchok, an oncologist at the Memorial Sloan-Kettering Cancer Center in New York. “But it was also a call to do better.”

On 2 June, Wolchok will present data from a trial that combined Yervoy with an experimental drug called nivolumab, also made by Bristol-Myers Squibb. It releases a second brake on the immune system by stifling a different protein. The number of patients in the trial was small, but the results suggest that melanomas shrank in half of those who received the highest two doses tested.

Combination approaches could expand the number of cancers that respond to immunotherapy. But they could also accelerate the rise in the cost of cancer care. US spending on cancer drugs is rising by some 15% a year, twice as fast as heath-care costs overall. “Cancer is a very complicated and expensive disease,” says Scott Ramsey, a health-care economist at the Fred Hutchinson Cancer Research Center in Seattle, Washington. “But now it’s turning into a chronic disease, and we’re talking about years of maintenance therapy with drugs that cost $10,000 a month.” However, not all of the inflation is due to expensive new drugs, says Ira Klein, a medical director at insurance company Aetna, based in Hartford, Connecticut. The price of radiation therapy is rising by 25% per year, he notes, driven by new technologies that can cost $100,000 or more for a full course of treatment.

Drug developers attribute the high cost of the drugs to the expense of research and development, which is compounded by the industry’s high failure rate. Wolchok notes that drugs such as Yervoy have a small market, and speculates that prices may fall once their markets expand to other cancers. But Peter Bach, who studies health-care policy at Memorial Sloan-Kettering, is sceptical that industry will cut prices. “I have never seen that,” he says. “I have only seen the opposite.”