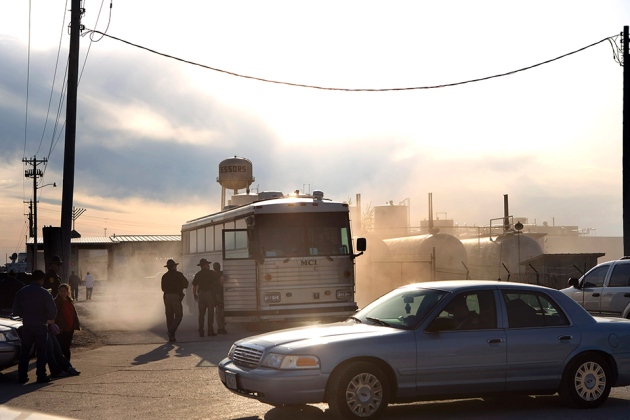 A massive immigration raid in Iowa in 2008 had lasting effects on the health of the state’s Latino community.

Alondra Garcia will never forget the day that US immigration officers tore apart her family’s house in Ann Arbor, Michigan, looking for her stepfather’s passport. She was 11 years old. One of the intruders dangled his handcuffs in front of her face, saying, “If I feel like it, I can handcuff your mom right now and you’ll stay by yourself.” Garcia and her mother were undocumented immigrants from Mexico; her stepfather, a Honduran who was also in the United States illegally, was detained that day and later deported.

For months, Garcia shivered every time she heard a knock at the door. Now, at 18, she worries about what would happen to her younger brother if the government sent her mother back to Mexico. US President Donald Trump has pledged to crack down on illegal immigration by deporting more people. As a result, Garcia says, “I’m scared of everywhere right now.”

Her story is not uncommon. More than 2.7 million undocumented immigrants were deported during former president Barack Obama’s first seven years in office. But Trump’s plans to tighten US border controls have exacerbated the fear and uncertainty felt by many immigrants and their families. Researchers are only beginning to understand the long-term mental and physical damage wrought by such stress — especially for children.

“Prolonged exposure to serious stress — known as toxic stress — can harm the developing brain and negatively impact short- and long-term health,” the American Academy of Pediatrics warned in January, after Trump signed an executive order directing the government to hire thousands of extra immigration and border-patrol agents and to deport more people who are undocumented. “The message these [immigrant] children received today from the highest levels of our federal government exacerbates that fear and anxiety,” the academy said.

Some research suggests that children of immigrants begin to feel the harmful effects of stress even before they are born. In 2008, nearly 900 US immigration agents raided a meat-processing plant in Postville, Iowa, a small town with a large Latino population. They arrested almost 400 undocumented workers on charges of identity theft and fraud, and ultimately deported about 300 of them.

When Nicole Novak, an epidemiologist at the University of Michigan in Ann Arbor, and her colleagues examined the birth certificates of more than 52,000 Iowa children, they found1 that Latina mothers across the state were 24% more likely to give birth to undersized babies in the year after the raid than in the year before. The weight of non-Latino white babies stayed constant, suggesting that Latino populations were uniquely stressed by the incident.

“These are women giving birth to US citizens, and this [stress] will impact their health and life chances,” says Kate Strully, a medical sociologist at the State University of New York at Albany. Low birth weight is associated with developmental delays, behavioural problems and an increased risk of chronic disease. And some studies suggest2 that extreme stress can alter a child’s DNA in ways that change gene expression and can be passed down to future generations.

For some researchers, the topic is personal. At the University of New Mexico in Albuquerque, undocumented students are recording the emotional and mental challenges of immigrants in their own communities. “This is for undocumented students to give something back,” says Josue De Luna Navarro, a team leader who is studying engineering.

Like his collaborators, he has a legal status known as deferred action for childhood arrivals (DACA), which gives temporary residency to people who entered the United States illegally as kids. “We’re always in fight or flight mode,” De Luna Navarro says. “We never really get a moment to just breathe.” Beyond the fear of deportation, DACA students must cope with being ineligible for federal financial aid, loans and some jobs.

Still, direct research on undocumented people remains difficult. For ethical reasons, most researchers do not ask study participants about their citizenship status, and many immigrants hesitate to seek medical care or register with the government, which limits relevant public data.

But circumstances sometimes provide natural experiments. In 2013, US government immigration agents conducted raids in Washtenaw County, Michigan, where social scientist William Lopez was running a health study. The 151 people who answered the survey after the raids reported worse general health than the 325 who had already completed it, says Lopez, of the University of Michigan. Many said that after the raids, they were too afraid to leave their homes for food or medical care, and displayed symptoms of post-traumatic stress disorder3.

Some researchers worry that Trump’s crackdown could also disrupt long-running studies of immigrant health, such as one in central California run by the University of California, Berkeley. For 17 years, the programme has followed 600 children of farmworkers, most of whom are Mexican and many of whom are probably not legal residents, says study leader Brenda Eskenazi, a neuropsychologist at Berkeley.

In the past year, the researchers have for the first time added questions about fear of deportation to their interviews. They have also begun distributing brochures that outline participants’ rights if federal agents come to the door. Says Eskenazi, “We’re really concerned about these people.”