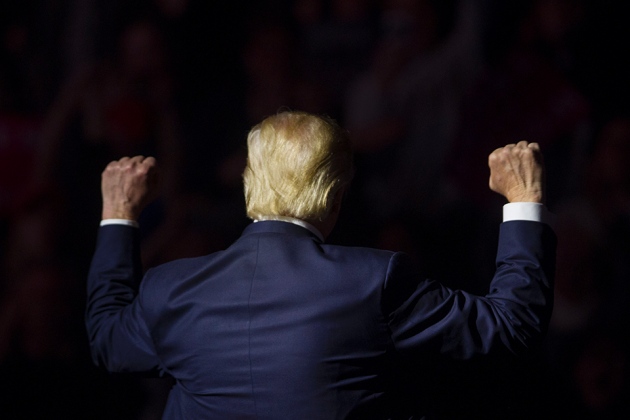 Donald Trump has taken a hard-line stance on US immigration.

As the US presidential election results rolled in, Naglaa Shoukry watched a door slam shut. An immunologist at the University of Montreal in Canada, she had been contemplating a move to the United States in search of better research funding. But when Donald Trump clinched the presidency, she knew that she would probably not go.

Shoukry, a Muslim from Egypt, did postdoctoral research in Ohio and was there when the United States tightened security after the terrorist attacks of 11 September 2001. When Trump pledged to use “extreme vetting” to determine which immigrants could enter the country, Shoukry recalled the hum­iliations her family experienced when travel­ling to see her in Ohio. “You have an interesting name,” a US border official once told her brother, Mohamed, before detaining him for extra security checks. Under Trump, Shoukry decided, it would surely be worse.

Shoukry is not the only scientist shaken by the result of the 8 November election, nor is she alone in reconsidering whether to work or study in the United States. Trump’s campaign rhetoric was at times insulting to women, immigrants and under-represented minorities, and there are signs that his victory has further inflamed racial tensions. The Southern Poverty Law Center, a civil-rights advocacy group in Montgomery, Alabama, collected 437 reports of intimidation and harassment in the five days after the election — many of which explicitly referenced president-elect Trump. Fifteen per cent of the incidents reported to the centre took place at universities.

Such events have led several universities and scientific societies to re­affirm their commitment to diversity. “Take concrete steps to protect and advocate for colleagues and students who are particularly vulnerable right now,” urges a letter signed by ten astronomers on the Astronomy in Color blog, which advocates for diversity in the field. “We must reiterate how absolutely essential it is to the core values of our community, and also to the well-being of our society and world, that all persons be treated with the dignity and respect they deserve,” wrote Amy Gutmann, president of the University of Pennsylvania in Philadelphia, when black undergraduates there received racist e-mails after the election. “We all stand together in solidarity with our Black students.”

Still, scientists around the country have reported harassment. Mónica Feliú-Mójer, a science communicator originally from Puerto Rico, is nervous about speaking Spanish in some public places after hearing a passer-by shout “Build that wall!” — referencing Trump’s plan to build a wall along the US–Mexico ­border. The 12 November incident took place in San Diego, California, where Feliú-Mójer was attending the Society for Neuroscience annual meeting.

Patrick Freeman, an ecologist at the Carnegie Institution for Science in Stanford, California, was out driving on the day after the election when a person in a truck with a Trump bumper sticker started honking at him — ­perhaps because Freeman’s car sports a sticker in support of Trump’s Democratic opponent, Hillary Clinton, and of lesbian, gay, bisexual, transgender and queer people. The truck driver pulled up alongside Freeman and repeatedly pantomimed shooting him before speeding away.

For some scientists, the post-election ­atmosphere has been stifling. Nicole Cabrera Salazar, an astronomy graduate student at Georgia State University in Atlanta who was born in Chile, says she is mindful that her field is dominated by white males — and that 63% of white males who voted supported Trump. Cabrera Salazar was once outspoken in support of marginalized students, but she has begun to hold back for fear of a backlash. “It’s a toxic environment for women of colour,” she says.

Some foreign researchers even question whether to travel to the United States for conferences. Shaaban Mousa, an anaesthesiologist at Charité University Hospital in Berlin, comes to the Society for Neuroscience meeting every year, but considered skipping it this year because of the election result. “I was not relaxed,” he said last week at the meeting. “I came because I have my ticket.” And Razi Nalim, an engineer at Indiana University-Purdue University in Indianapolis, worries that he’ll have difficulty recruiting Muslim students and postdocs to work in his department.

About 2% of scientists in the United States are Muslim immigrants, according to a survey of biologists and physicists led by Elaine Howard Ecklund, a sociologist at Rice University in Houston, Texas. And 64% of them say they have experienced religious discrimination — a higher proportion than for any other racial or religious group in Ecklund’s study. The US Federal Bureau of Investigation’s annual hate-crimes report suggests that number may grow: hate crimes against Muslims in the United States climbed by 67% last year.

But several Muslim scientists contacted by Nature still feel comfortable in the United States. Some, such as a husband and wife studying neuroscience at the Medical University of South Carolina in Charleston, were pleased to see Trump win. “It's a good change for the US,” says the husband, who asked not to be named over concerns about his career. He and his wife say they have never experienced racism or Islamophobia during their time in South ­Carolina — a state where Trump won 55% of the vote — and they have been shocked by mass e-mails from their professors calling Trump supporters ­racist and hateful.

Shoukry says that some of her Muslim ­colleagues in the United States are troubled by the thought of raising children in an increasingly hostile environment. Islam Hussein, an Egyptian virologist who is a research scientist at the Massachusetts Institute of Technology in Cambridge, says his children were nervous about going to school the day after the election. But after a decade in the United States, Hussein wants to stay. His family has always felt welcome, he says, and his wife, who wears a hijab, has a flourishing career as a pre-school teacher. After the election, friends rushed to offer the family support. “This is the spirit of America that we should all keep embracing,” Hussein told Nature on 14 November.

The next day, Hussein contacted Nature again: his wife had just been accosted at their local pharmacy. “Why are you still here?” a man shrieked at her, then hopped into his car and fled. “I think he meant: ‘Why are you still here after Trump’s election?’,” says Hussein. “This is the first explicit act of discrimination we have encountered in ten years.”

This story has been corrected to remove the names of some of the people quoted, and to reflect that Islam Hussein is a research scientist and not a postdoc.