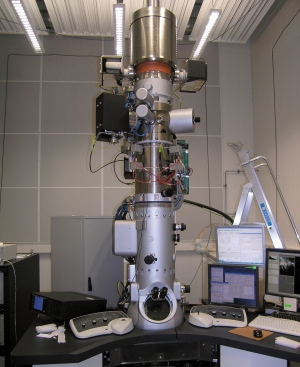 The German SALVE 2 electron microscope is being redesigned to limit noise.

Plans for the next generation of electron microscopes have been dealt a blow by the discovery of an unexpected source of noise that could frustrate efforts to improve resolution to well below the size of an atom.

Researchers working for a leading manufacturer of advanced optics describe the noise source in a paper1 now in press. They think that they can find a way to mitigate it, but electron microscopists admit that the finding is the latest sign that their costly quest to capture ever more detailed images is coming up against physical limits. Some say their efforts might be better spent on making instruments cheaper and more widely available.

“Is it better to have ten machines working at 1-ångström resolution solving hundreds of materials-science problems, or one expensive instrument that may not work — but will push the boundaries?” asks David Muller, a physicist at Cornell University in Ithaca, New York.

Electron microscopes, first developed in the early twentieth century, fire electrons through a material and use the way they scatter to produce images thousands of times finer than can be captured with a light microscope. In 1959, US physicist Richard Feynman set a daunting challenge: to reach a resolution of 0.1 Å, smaller than the radius of an atom. Nearly 60 years later, in 2008, the US$27-million Transmission Electron Aberration-Corrected Microscope (TEAM) project, at Lawrence Berkeley National Laboratory in Berkeley, California, unveiled a microscope with a resolution of 0.5 Å — twice the sensitivity a microscope had achieved four years before, and the size of the smallest chemical bonds in nature. Since then, manufacturers have been pushing to make that technology more affordable, microscopists in Japan and Germany have planned their own sub-ångström instruments and the Berkeley researchers have sought even finer resolution for TEAM.

However, TEAM did not quite fulfil their hopes, despite reaching its intended resolution. The project’s first instrument performed as expected, but a second failed to improve on its forebear, despite being more advanced.

The second microscope includes a chromatic-aberration corrector, a complex assembly of magnetic and electric lenses intended to remove blurriness caused by variations in electron energy. Researchers hoped that would help them to achieve a resolution of 0.33 Å, but the instrument turned out to have worse resolution than the first microscope. In 2010, engineers at Corrected Electron Optical Systems (CEOS) in Heidelberg, Germany, the company that built the roughly €1.2-million (US$1.6-million) corrector, began to investigate why.

The answer was slow to come, says Stephan Uhlemann, a CEOS engineer. Eventually, in experiments this year, he found that he could replicate the blurring without the corrector, if he replaced it with empty tubes of materials used in its construction, such as a nickel–iron alloy, copper and stainless steel. This suggested that the noise arises from a physical phenomenon in the materials, rather than from problems with the lenses. The effect is worse at higher temperatures, so Uhlemann realized that it must be caused by thermal vibrations jiggling electrons in the materials and producing magnetic fields that jostle electrons in the microscope’s beam1.

Such noise is thought to be present in all electron microscopes, but the scale of the CEOS correctors — each nearly one metre long and weighing 0.75 tonnes — magnifies it. The company estimates that the effect limits resolution by 0.45–0.75 Å, enough to explain why the second TEAM microscope was unable to beat its fore­runner.

“It’s a physical limit, so we really have to think hard” about how to solve it, says Ute Kaiser, an electron microscopist at Ulm University in Germany who directs Sub-Ångström Low-Voltage Electron Microscopy (SALVE), a €12-million project to build two pioneering microscopes. SALVE and CEOS are working together to redesign one of these instruments, currently under construction, to try to reduce the noise problem by moving the electron beam farther away from the troublesome materials.

But magnetic effects are not the only source of noise identified in recent years. In 2012, Ruud Tromp, a microscopist at Leiden University in the Netherlands, and his colleagues showed that modern aberration correction is intrinsically unstable, and that electrostatic or other types of noise cause blurring after only a few minutes2. Muller’s group has shown that at current resolution limits, quantum-mechanical effects from electrons scattering off atoms in crystals can make imaged atoms seem larger or smaller than they really are3.

Even with its current limits, the 0.5-Å TEAM microscope can do groundbreaking science. In April, physicist John Miao and his group at the University of California, Los Angeles, published the first atomic-scale images of crystal defects in a platinum nano­particle4. Uli Dahmen, head of the US National Center for Electron Microscopy in Berkeley, where the microscope is housed, says that Miao’s team is close to mapping nanoparticles in three dimensions. That would meet Feynman’s ultimate goal of imaging materials atom-by-atom — even without achieving the resolution he called for. “I don’t see anyone pressing materials-science problems that can be solved at 0.3 Å but can’t be solved at 0.5 Å,” says Dahmen.