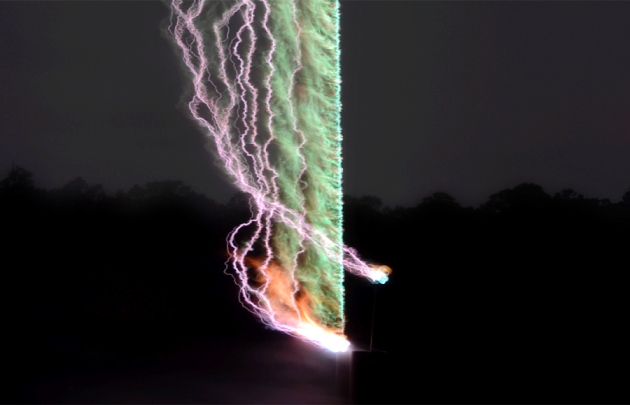 On a US military base outside Gainesville, Florida, atmospheric scientists make lightning by shooting rockets into thunderstorms. Now they have used this explosive set-up to produce some of the most detailed images of thunder ever made.

The pictures are not much to look at — just rainbow-coloured blobs and streaks. But they represent the acoustic energy that ripples outwards as lightning bolts come down from the sky. The work provides a way to look at the energetics behind thunder and lightning.

“Whenever we can come up with a new tool for studying lightning or seeing it in a new way, that’s a good thing,” says Joseph Dwyer, an atmospheric physicist at the University of New Hampshire in Durham who was not involved in the research. “That’s what this new acoustic imaging does.”

Making lightning (and thunder) with rockets

Maher Dayeh, an atmospheric scientist at the Southwest Research Institute in San Antonio, Texas, presented the findings on 5 May in Montreal, Canada, at the 2015 Joint Assembly, a meeting of four US and Canadian geological societies.

Last year, Dayeh and his colleagues set up a line of 15 sophisticated microphones, spaced 1 metre apart, at the International Center for Lightning Research and Testing at Camp Blanding in Florida. On 14 July, during a thunderstorm, lab operators launched a rocket into the clouds to trigger a lightning strike.

Lightning forms when electrical charges separate and build up between the clouds and the ground, or inside the clouds themselves. Thunder is the sound that is created when the resulting lightning strike suddenly heats the air.

Earlier experiments have captured images of thunder using a handful of microphones spread over large areas. This technique, known as ranging, can pinpoint the source of a loud sound. But the latest work is the first to record the acoustic energy emitted by lightning in such exquisite detail, Dayeh says. 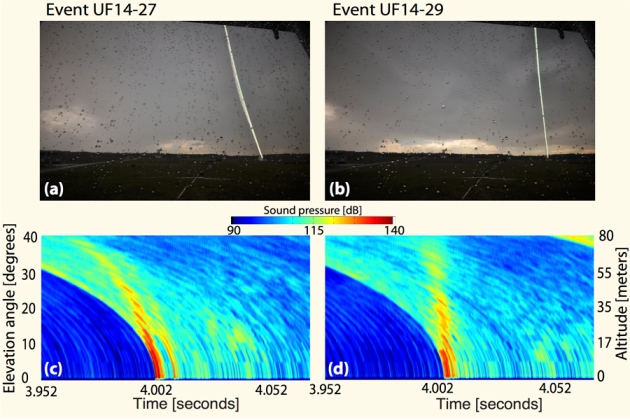 The images show exactly how much energy was radiating, in different frequencies, off the lightning bolt as it hit the ground in at least nine separate strokes. The loudest part of the blast comes from where the bolt strikes the earth. “That's where the lightning channel is attaching into the ground,” Dayeh says.

The work opens the door for other experiments that will help to improve understanding of lightning. Artificially triggered lightning tends to come down in a straight line, so scientists would like to create and acoustically image a zigzagging lightning channel more like a natural bolt. Then they could figure out how the energy flows along the various branches, Dayeh says. “When this will happen, we aren’t sure yet,” he adds.

Dayeh says that he tried to pass off the first thunder image to his wife as a piece of modern art that they should hang over the fireplace at home.