When Finnish peasant mothers didn't have enough to eat while pregnant, their children bore the consequences later in their lives, with poorer health and shorter life expectancy.

People who were undernourished during infancy or in the womb are less resilient during famines later in life, have shorter lifespans and are less likely to reproduce than those who were well fed, a study of Finnish church records from the 1800s has found. The results contradict an often-cited hypothesis about the effects of prenatal under-nutrition.

The predictive adaptive response (PAR) hypothesis posits that people who are deprived of food during prenatal development or infancy compensate physiologically, storing fats and using sugars more efficiently. This, in turn, is thought to make them better able to withstand food scarcity later in life, and it has been suggested that these traits would be passed on to their offspring.

The PAR hypothesis could offer one explanation for the high rate of metabolic diseases such as high blood pressure, obesity and diabetes among people who experience food scarcity early in life. It proposes that if these individuals encounter plentiful food resources when they are older, they are more apt to store abdominal fat and gain weight, leading to a plethora of metabolic disorders.

Instead, the Finnish study, which appears this week in the Proceedings of the National Academy of Sciences1, concludes that people who were undernourished during early development are less able to cope with famine as older children and adults.

“A lot of ecological studies [in animals] have shown that a bad start in life, such as low food or high population density around the time that you’re developing, is essentially bad for your fitness,” says Adam Hayward, an evolutionary ecologist at the University of Sheffield, UK, and first author of the study. “And humans are apparently very similar in that respect.” 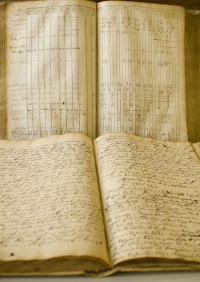 The study used census information — including births and deaths — from 19th-century Finnish parish records and matched it with data on crop yields from the same regions.

Hayward and his team used preindustrial church records from Finland that contained details on births, deaths and socioeconomic status to piece together the life histories of 3,236 individuals from two nineteenth-century agricultural populations. These people had little access to transportation and were heavily dependent on rye and barley crops in an unfavourable growing climate.

The researchers analysed data on crop yields over a 50-year period that culminated in a severe famine in the 1860s, which was marked by high death rates from diseases such as smallpox, typhus and whooping cough. They investigated how crop yields around the time of birth affected people's survival and reproductive success during the famine. Those who experienced higher crop yields when they were born were more likely to survive the famine and to have children, the team found.

“The study by Hayward et al. is one of the few to date to test empirically some of the key tenets of the PAR hypothesis,” says Jonathan Wells, an expert in paediatric nutrition at University College London, who was not involved in the research.

Chris Kuzawa, a biological anthropologist at Northwestern University in Evanston, Illinois, says that the study makes an important contribution but is “not a slam-dunk case” against the PAR idea. Because the main cause of death during the Finnish famine was infectious disease, which the PAR hypothesis does not address, the implications of the findings for the hypothesis are “a little murky”, says Kuzawa. A more direct test of the hypothesis, he says, would be whether poor early-life nutrition protected the Finnish populations against later starvation or malnutrition.