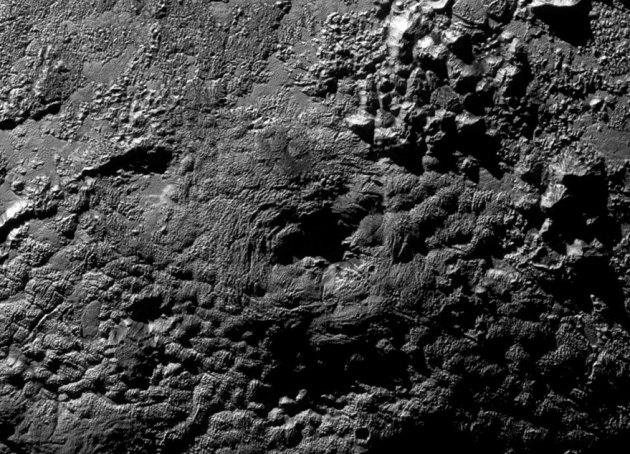 An overhead view of Wright Mons, one of two potential cryovolcanoes on Pluto.

The images show two mountains that are roughly circular in shape, with deep depressions at their centres. One of the peaks, Wright Mons, is 3–5 kilometres high, whereas the other, Piccard Mons, is up to 6 kilometres high. They resemble icy volcanoes, known as cryovolcanoes, on Neptune’s moon Triton and other frozen worlds.  Flowing ice, rather than hot lava, fuels cryovolcanoes. 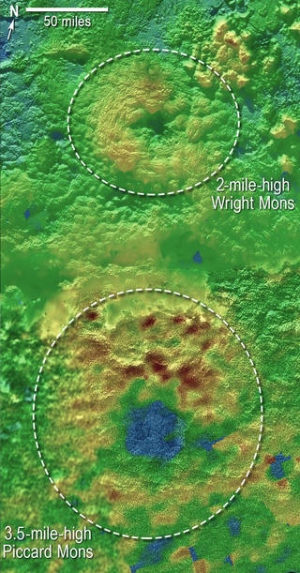 “We’re not yet ready to announce we have found volcanic constructs at Pluto, but these sure look suspicious, and we’re looking at them very closely,” says Jeff Moore, a planetary scientist at NASA’s Ames Research Center in Moffett Field, California, who heads the New Horizons geology team. Moore spoke on 9 November at the American Astronomical Society’s Division for Planetary Sciences meeting in National Harbor, Maryland.

The New Horizons team identified the potential volcanoes while assembling a topographic map that shows the bumps and dips of Pluto's surface in 3D. The Piccard and Wright mountains are broad — at least 160 kilometres wide — with craters at their summits. These seem similar to the depressions in some volcanoes on Earth, where the summit of the volcano drops after lava beneath it drains away.

If Pluto does indeed have cryovolcanoes, it would suggest that the volatile ices coating its surface can flow relatively easily both at the surface and just below it, says Robert Pappalardo, a planetary scientist at NASA’s Jet Propulsion Laboratory in Pasadena, California.

Much of the rest of Pluto’s surface is geologically active, with towering mountains and smooth icy plains. All that activity suggests that some internal heat source — most likely the radioactive decay of elements left over from Pluto’s birth, 4.5 billion years ago — keeps things warm enough to flow.

Other possible explanations for the Wright and Piccard mountains include tectonic activity that does not involve volcanoes. Jupiter's moon Ganymede also has cryovolcanic-like features that are not fully understood, Pappalardo says.

At the meeting, team members began to unveil other new findings from New Horizons. Among them are data that apparently solve one of the biggest early puzzles of the mission: how thick Pluto's atmosphere is. Before New Horizons's 14 July flyby, researchers on the ground measured the atmospheric pressure tens of kilometres above Pluto's surface by examining how the atmosphere dimmed and flickered as the dwarf planet passed in front of nearby stars. Once it reached Pluto, New Horizons used a similar method to measure pressure down at Pluto’s surface. The New Horizons data showed a much lower pressure at the surface than was expected by extrapolating from the measurements higher in the atmosphere.

Now, it seems that the apparent discrepancy can be reconciled. Pluto’s atmosphere turns out to be thinner and colder at high altitudes than was expected, says Randy Gladstone, a New Horizons team member at the Southwest Research Institute’s headquarters in San Antonio, Texas. By adjusting the temperature models that explain how pressure at higher altitudes translates to pressure near the surface, researchers were able to bring them into line.

“Going in I had this cute idea of how Pluto’s atmosphere worked,” says Gladstone. “That’s not happening.”