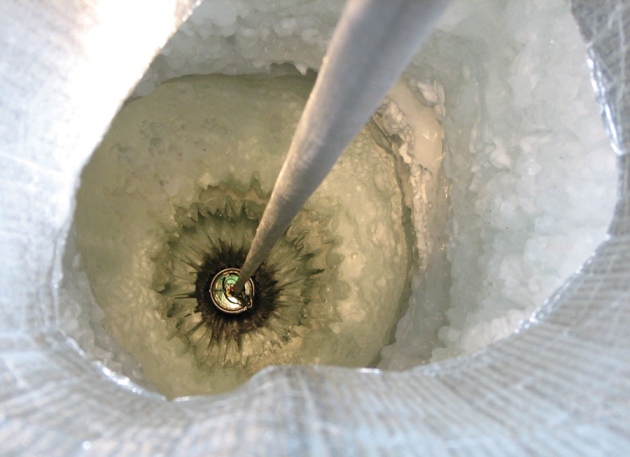 An optical sensor begins its 2,500-metre journey down a borehole to become part of the IceCube neutrino detector in Antarctica.

An observatory buried deep in Antarctic ice has reported the results of its search for an hypothesized particle called the ‘sterile neutrino’: a total blank.

The null result, reported on 8 August in Physical Review Letters1, doesn’t spell the end of a decades-long search to find the subatomic particle, which — if found — would upend the standard picture of particle physics. But it is the strongest evidence so far that the sterile neutrino doesn’t exist at the mass range that physicists had hoped, based on anomalies from several experiments over the past three decades.

Neutrinos are everywhere: every second, trillions of the subatomic particles fly through our bodies. But they interact so rarely with matter that to detect them requires large underground experiments equipped to spot neutrino–matter collisions. These experiments have spotted three types: the electron neutrino, muon neutrino and tau neutrino; the three can change type as they travel.

In the mid-1990s, a detector at the Los Alamos National Laboratory in New Mexico saw an anomaly that hinted there might be a fourth kind of neutrino, which would interact even more rarely with matter than would ordinary neutrinos. It was dubbed the ‘sterile’ neutrino, and the Los Alamos experiment suggested it weighed around one-billionth the mass of a hydrogen atom — around 1 electronvolt (1 eV). Other experiments found similar anomalies. More-recent studies that counted neutrinos streaming from nuclear reactors, including last February at Daya Bay in China2, have seen strange features in their data that could, in theory, point to a sterile neutrino.

Answers in the ice

The sterile neutrino can’t be detected directly. “The only way to see it is because it messes up the observation of the three other neutrinos,” says Francis Halzen, a physicist at the University of Wisconsin–Madison. Halzen is the principal investigator at IceCube, an array of more than 5,000 basketball-sized sensors embedded in ice to depths of more than two kilometres. The telescope hunts for neutrinos by detecting the faint flash of light caused whenever such a particle hits an atomic nucleus in the ice.

To search for sterile neutrinos, Halzen’s team looked for the arrival of muon neutrinos that started life on the other side of Earth (see 'Neutrino observatory'). These were originally produced by the collision of cosmic rays with air molecules in the atmosphere, and passed through the planet to reach the detector. The IceCube team hoped to find a dearth of muon neutrinos at particular energies. That would have suggested that some muon neutrinos had temporarily mutated into sterile neutrinos during their voyage.

But, after analysing the results of a year's worth of data, the researchers found no feature suggesting the existence of sterile neutrinos around 1 eV. This is line with results from the European Space Agency's Planck observatory, which concluded from cosmological evidence that there should only be three families of neutrinos in that mass range. “I hope that with our result and with the Planck result we are slowly walking our way back from this story,” says Halzen. The IceCube team are still taking data in their sterile neutrino hunt, but don't expect their results to change, he adds.

Olga Mena Requejo, a theoretical particle physicist at the University of Valencia in Spain, agrees that the findings rule out the sterile-neutrino explanation for the Los Alamos experiment anomaly — at least within the simplest theoretical models. But she and other physicists say that some models could still leave the door open for the particle's existence.

In particular, the Daya Bay experiment counted electron neutrinos, not muon neutrinos: sterile neutrinos could in principle mutate into muon neutrinos much more rarely than into other types, points out Jiajie Ling, a physicist at Sun Yat-Sen University in Guangzhou who coordinated Daya Bay's sterile-neutrino analysis.

The search goes on

Separately, X-ray astronomers have seen an unexplained glow in certain galaxies that, according to one theory, could also be explained if a much heavier sterile neutrino existed, with a mass of around 7,000 eV. Earlier this year, the short-lived Hitomi space observatory found no evidence of the 7 KeV sterile neutrinos3, but that result was inconclusive, says Kevork Abazajian, a theoretical astrophysicist at the University of California in Irvine. So the search at heavier masses goes on: the IceCube results say nothing about the existence of these more massive sterile neutrinos.

A trio of detectors now under construction at Fermilab should be able to either conclusively rule out the Los Alamos anomaly, or find an explanation for it — which may or may not involve sterile neutrinos.

“Hunting for the sterile neutrinos is like hitting a bat in a dark room,” says Kam-Biu Luk, one of the principal investigators at the Daya Bay experiment. “We have no idea where they hide.”