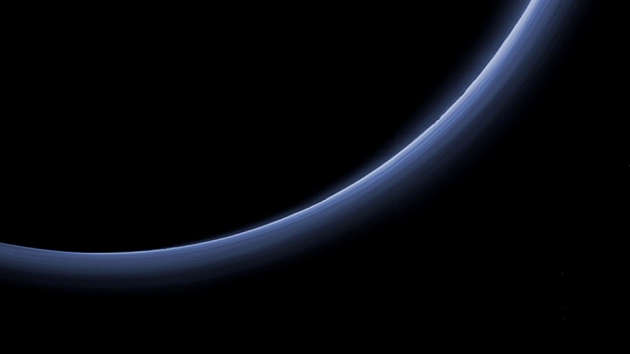 When NASA’s New Horizons spacecraft whizzed by the dwarf planet in July 2015, it famously spotted a heart-shaped feature just north of the equator. Now, researchers are recognizing how that enormous ice cap drives much of Pluto’s activity, from its frosty surface to its hazy atmosphere.

Planetary scientists revealed their latest insights this week at a joint meeting of the American Astronomical Society’s Division for Planetary Sciences and the European Planetary Science Congress in Pasadena, California. Many of those discoveries revolve around Sputnik Planitia, the icy expanse that makes up the left lobe of Pluto’s ‘heart’. “All roads lead to Sputnik,” says William McKinnon, a planetary scientist at Washington University in St. Louis, Missouri.

Researchers already knew that Sputnik Planitia (formerly dubbed Sputnik Planum) is made mostly of nitrogen ice, churning and flowing in massive glaciers1. But its sheer size — 1,000 kilometres across and at least several kilometres deep — means that it exerts extraordinary influence over the dwarf planet’s behaviour. 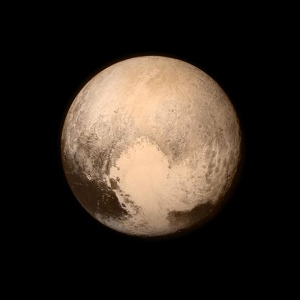 The heart may have even knocked Pluto on its side. At the meeting, James Tuttle Keane of the University of Arizona in Tucson showed how the feature’s formation could have altered Pluto’s tilt. Sputnik Planitia may be a crater punched by a giant meteorite impact, which later filled with ice. The sheer mass of all that ice caused the dwarf planet to rotate relative to its spin axis, Keane says, so that Sputnik Planitia ended up permanently facing away from Pluto’s biggest moon, Charon. “Pluto followed its heart,” he says. (Other scientists, such as Douglas Hamilton of the University of Maryland in College Park, have suggested that Sputnik Planitia might have accumulated ice without an impact, and that the hole instead comes from the sheer weight of the ice depressing the ground beneath it.)

The enormous reservoir of Sputnik Planitia also feeds Pluto’s complicated atmosphere. Volatile chemicals such as nitrogen, methane and carbon monoxide start out as ices on the surface, often within Sputnik, then sublimate into the air when temperatures warm. As the atmosphere cools, the volatile gases condense and fall back to the surface, coating it with a fresh layer of frost. Pluto is currently moving away from the Sun and so temperatures are growing colder.2

New Horizons, which analysed light passing through Pluto’s thin atmosphere, showed just how complicated the interplay between the surface and the atmosphere is, says Leslie Young, a planetary scientist at the Southwest Research Institute in Boulder, Colorado. As dawn breaks over Sputnik Planitia, sunlight warms the icy plain and allows a pulse of nitrogen to waft upwards. “I think of this piston of cold air being pushed into the bottom of the atmosphere every day and then dropping back down,” says Young.

New data also reveal how the seasonal frosts behave on the surface. Silvia Protopapa, a planetary scientist at the University of Maryland, showed maps of how methane and nitrogen are distributed across Pluto’s surface, as seen by an infrared-sensing instrument on New Horizons. The ices typically co-exist in a mix in which one substance or the other dominates.

In Sputnik Planitia, temperatures and sunlight combine to create an environment where nitrogen rules. Farther north, above about 55 degrees latitude, constant summer sunlight seems to have stripped most of the nitrogen away, leaving behind plains of methane ice at Pluto's north pole. “We’ve had continuous illumination northward for the past 20 years,” says Protopapa. The work is to appear in the journal Icarus.

Sputnik Planitia’s influence reaches the highest levels of Pluto’s atmosphere. Its volatile gases drift upwards, and photochemical reactions create new carbon and nitrogen compounds. These form layered hazes that extend more than 200 kilometres above the surface. That’s higher than researchers would have predicted, because temperatures at this level are too warm for particles to condense out directly. Instead, dust raining in from interplanetary space might serve as nuclei around which haze particles can form, says Andrew Cheng, a planetary scientist at the Johns Hopkins University Applied Physics Laboratory in Laurel, Maryland.

Haze particles then begin to clump together, growing bigger and more rounded the lower they drift in the atmosphere, Cheng says. Eventually they settle out on to Pluto’s surface, and coat it afresh until warming begins and they are once again lofted.

New Horizons has slowly been trickling data back to Earth since its record-setting fly-by, and final observations from its encounter are due to be returned on the night of 22–23 October. They will show pictures of the dark vastness of space surrounding Pluto — photographed just in case a tiny unknown moon or other cosmic discovery still happens to be lurking in the New Horizons data.