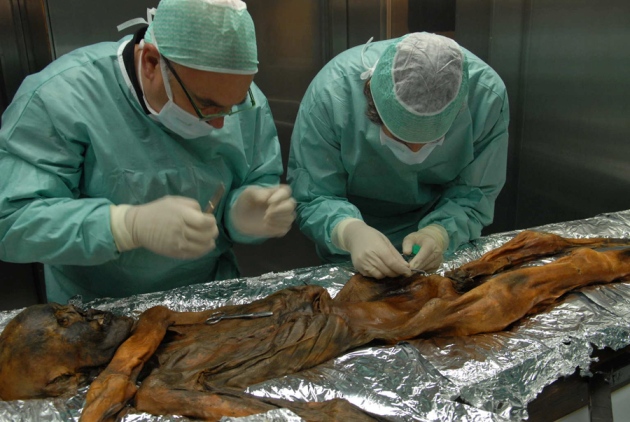 The world’s most famous frozen corpse has had his genome sequenced. An international team has today published the almost complete DNA sequence of Ötzi the Tyrolean Iceman in Nature Communications1, and has found clues as to the whereabouts of his closest living relations.

Hikers discovered Ötzi’s 5,300-year-old body in the Alps near the Italian–Austrian border in 1991. It was well preserved, and has become one of the most studied cadavers in science. Researchers have already discovered that Ötzi suffered from hardened arteries and tooth cavities, bore tattoos and gorged on ibex before dying with an arrow lodged in his back — but there is still more information to be gained from his body.

“We would like to know as much as possible about his living conditions, about himself and also his cause of death. We really tried to reconstruct a crime scene as much as possible,” says Albert Zink, head of the Institute for Mummies and the Iceman in Bolzano, Italy, and leader of the sequencing study.

In 2008, scientists reported2 the complete sequence of DNA taken from Ötzi’s cellular mitochondria. It contained mutations not found in present-day populations, and led to speculation that the iceman had belonged to a people that has vanished from Europe. To get a better picture of Ötzi’s ancestry and a look at some of his genetic traits, Zink’s team sequenced the DNA from the nuclei of cells taken from a sliver of the iceman’s pelvic bone. The sequence accounts for around 96% of Ötzi’s genome.

The data suggest that Ötzi had brown eyes and type-O blood, and was lactose intolerant. Zink’s team also discovered gene variants linked to hardened arteries, which could help to account for calcium deposits found in scans3. “He wasn’t obese, he was very active, he doesn’t have strong risk factors for developing calcification of his heart,” says Zink. “Perhaps he developed this due to a genetic predisposition.”

Ötzi’s genome also hints at other health problems: Zink’s team found almost two-thirds of the genome of Borrelia borgdorferi, a bacterium that causes Lyme disease. Zink found no other telltale signs of Lyme disease in Ötzi’s preserved tissues, but he speculates that tattoos on the iceman’s spine and ankles and behind his right knee could have been an attempt to treat the joint pain that occurs when the condition goes untreated.

Zink’s team also gathered information about Ötzi’s ancestry. His Y chromosome possesses mutations most commonly found among men from Sardinia and Corsica, and his nuclear genome puts his closest present-day relatives in the same area. Perhaps Ötzi’s kind once lived across Europe, before dying out or interbreeding with other groups everywhere except on those islands.

That makes sense, says Eske Willerslev, a palaeogenomicist at the University of Copenhagen. “Sardinians are a group that people have considered distinct from other Europeans, and in this regard it would be interesting if they were more widely distributed in the past.”