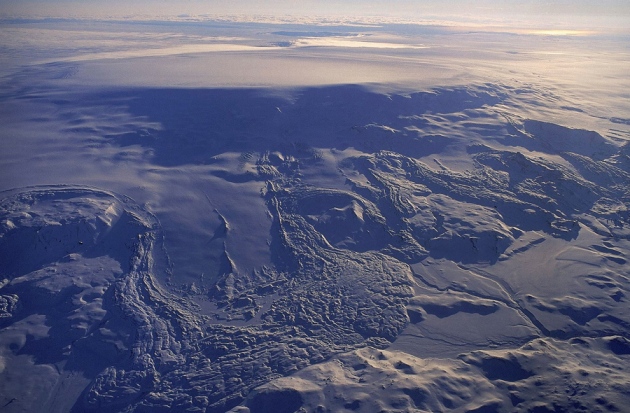 The volcano Bárðarbunga lies under Vatnajökull, the largest ice cap in Europe.

Early in the morning of 16 August, in a remote corner of central Iceland, small earthquakes began shaking the ground beneath Europe’s largest ice cap. Seismologists think that the activity means that molten rock, or magma, is moving around underground. As of 20 August, there was no sign that magma had reached the surface and begun a full-fledged eruption, but researchers are monitoring it closely in case that happens. 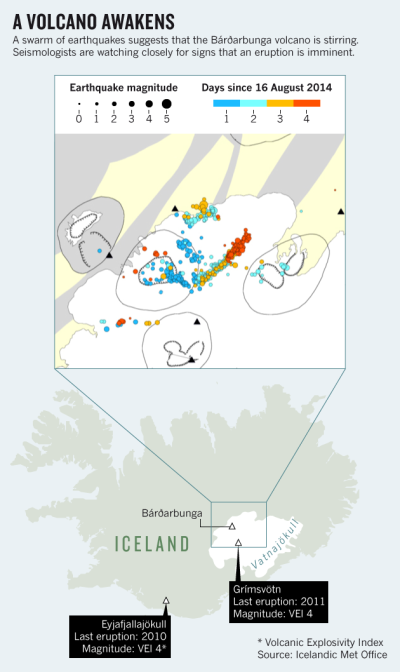 Icelandic authorities have raised the aviation threat level to orange, the fourth notch on a five-point scale. Memories are running strong of the 2010 eruption of the Eyjafjallajökull volcano, which sent ash into European airspace and grounded commercial flights for days.

Nature takes a look at the activity at the latest volcano, and what might happen next.

Which volcano is this?

The unrest is taking place at an ice-covered volcano called Bárðarbunga. (Learn how to pronounce it here.)

Iceland has more than 30 active volcanoes, and experiences an eruption once every five years on average. The island is so volcanically active because it sits atop a ‘mantle plume’ of hot rock rising from deep within Earth, as well as being located along the mid-Atlantic ocean ridge, where fresh seafloor crust is constantly erupting.

Studies of ash layers up to 7,600 years old suggest that Bárðarbunga erupts about five times per century1. The last time was probably in 1910, although it is not clear whether the eruption was at Bárðarbunga proper or at another rift in the ground extending away from it, says Bergrún Óladóttir, a volcanologist at the University of Iceland in Reykjavik.

What is it doing?

More than 2,600 earthquakes have shaken Bárðarbunga since Saturday morning. The largest so far has been a magnitude 4.5, and most fall into one of two clusters that have been migrating towards the north and east. Earthquake swarms such as this usually mean that magma is shifting, perhaps as it is squirted into fractures then forming a long sheet of fresh rock known as a dike.

Global-positioning-system (GPS) measurements also show that the ground is deforming mostly in a horizontal direction. The ground shifts match what would be expected if a dike were forming a few kilometres deep and running from the southwest to the northeast, says Sigrún Hreinsdóttir, a geophysicist at the University of Iceland.

Icelandic scientists have been flying over the volcano to check, but as yet there has been no sign of an actual eruption.

Are we going to see a repeat of what happened in 2010 with Eyjafjallajökull?

Probably not. The 2010 Eyjafjallajökull crisis was a rare combination of a lot of ash plus winds that happened to be blowing toward mainland Europe. Since the transportation meltdown that resulted, officials have improved their understanding of how to respond to eruptions, so planes should be able to keep flying — perhaps on limited routes — if ash again approaches continental Europe. The UK Met Office has revised its atmospheric transport models to better reflect how wind carries dry ash over long distances. And the International Civil Aviation Organization has clearer guidelines on what levels of volcanic ash are acceptable for planes to fly through. (If sucked into jet engines, volcanic ash can melt and form a glass-like substance that clogs and shuts down the engine.)

So what is likely to happen at Bárðarbunga, and when?

Anything could happen. The quietest possibility is that the earthquakes subside, the moving magma solidifies and there is no eruption.

Another scenario is that the magma begins to erupt but stays beneath the overlying ice. The heat from such subglacial eruptions can melt some of the ice, creating floods that rush downhill and pose a hazard to anything in their path.

A third option is an eruption with a lot more magma, enough to break through the ice and form an ash plume. And perhaps the worst-case scenario, according to volcanologist Dave McGarvie of the Open University in Edinburgh, UK, is that an eruption begins along the long fractures that extend beyond the ice cap for tens of kilometres south and west of Bárðarbunga. Much of Iceland’s hydroelectric power comes from rivers in this region.

The timeline remains uncertain. It can take days, weeks or even months, for seismic unrest to develop into a full-fledged eruption — if it happens at all.

What are officials doing about it?

Researchers have deployed extra seismometers and GPS equipment to try to capture the action; updates can be found at the Icelandic Meteorological Office website. As a safety precaution, Iceland’s civil protection service has evacuated areas north of Bárðarbunga.

Other than that, it is just time to watch and wait. Footage from webcams monitoring the volcano can be found here and here.