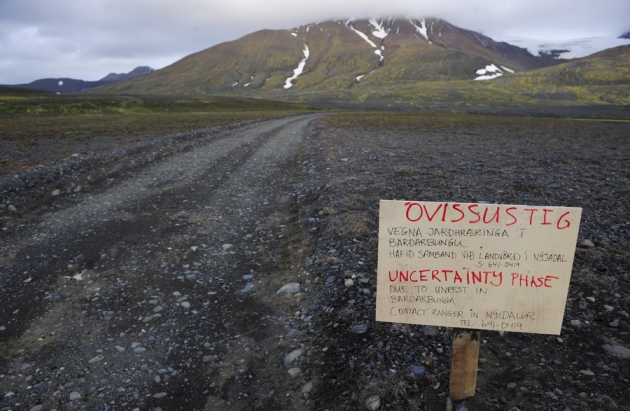 A warning sign blocked the road to Bárðarbunga on 20 August, as volcanologists anticipated the eruption that began on 29 August.

Iceland’s Bárðarbunga volcano erupted just after midnight local time on 29 August, sending small lava fountains into the air north of the ice cap that covers the main caldera. The London Volcanic Ash Advisory Centre, which oversees the northeastern Atlantic Ocean, including Iceland, noted that an eruption had begun but said that it anticipated no immediate threat to aviation.

The fire fountains are the most dramatic manifestation yet of unrest that began on 16 August, when a swarm of small earthquakes signalled the movement of molten rock underground. Since then, vast amounts of magma have formed a sheet of freshly cooled rock, called a dyke, that stretches for about 45 kilometres north of Bárðarbunga.

The dyke is interacting with a set of cracks in the Earth that lead toward Askja, a volcano approximately 20 kilometres away. Small earthquakes have begun to shake Askja, and on 28 August the Icelandic Meteorological Office raised the aviation colour code for the volcano from green to yellow, indicating “signs of elevated unrest”; Bárðarbunga is code orange. In centuries past Bárðarbunga has triggered eruptions at other nearby volcanoes, although never at Askja.

The latest eruption occurred between Bárðarbunga and Askja, in a remote and unpopulated plain of cooled lava. The Icelandic department that oversees emergency response reported that lava was spurting from a fissure of 100 metres or more. As of early in the morning of 29 August, this development appeared to be relatively small and undramatic.

Still, Bárðarbunga's ongoing unrest seems guaranteed a spot in the annals of volcanology, thanks to the fact that researchers have watched almost every step in incredible detail. “This is absolutely unique — we’ve never had anything like it,” says Agust Gudmundsson, a geologist at Royal Holloway University of London.

The sheer volume of magma involved — perhaps some 0.4 cubic kilometres in the dyke — suggests that it is coming directly from Earth’s mantle. That places the source perhaps hundreds of kilometres below the surface of the crust, rather than in a shallow magma chamber of the sort found beneath many volcanoes, says Evgenia Ilyinskaya, a volcanologist with the British Geological Survey in Edinburgh.

Scientists have been tracking the flow of the dyke under the ice by the way it causes earthquakes and shifts the ground more broadly. Global Positioning System receivers on the ground and ice above Bárðarbunga have lurched more than 20 centimetres to the west as magma has risen to fill the crust just below the surface.

The earthquakes have moved toward Askja, which is most famous for an 1875 blowout that sent volcanic debris as far away as Norway and Sweden. The fact that the current eruption began before the dyke reached Askja lessens the possibility of an eruption at Askja itself, says Gudmundsson.

Had the dyke managed to make it all the way to Askja, he speculates, it might have changed stress fields in the ground and supplied fresh magma that could have caused Askja to erupt. There is precedent: in ad 870 and 1477, Bárðarbunga triggered eruptions at a different volcano to its southwest.

For now, scientists from universities and governments around the world are deploying as many instruments as they can and flying over the region daily. On 27 August, they spotted three circular depressions, known as ice cauldrons, in the ice cap on the southeast side of Bárðarbunga. The cauldrons are 10–15 metres deep and form a row about 5 kilometres long.

“To make a cauldron you need to have melting at the base of the ice,” says Hugh Tuffen, a volcanologist at Lancaster University, UK. Because water takes up less space than ice, when the underlying ice melts, the ice above it will flow down or fracture to fill the space, leaving a depression at the surface of the ice cap. Factors such as ice thickness, rate of heating and water drainage all affect how cauldrons form on active volcanoes1.

But such cauldrons can form without an eruption; geothermal heat from still-buried magma can sometimes melt the ice. More than a dozen ice cauldrons formed atop the Katla volcano in Iceland in 1999, Tuffen says, and scientists still are not sure whether they came from an eruption or not.