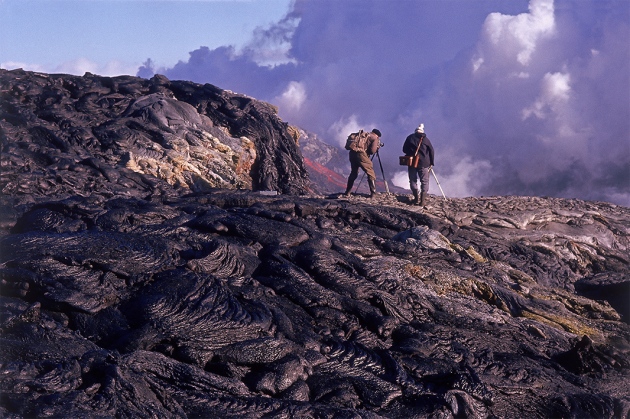 People inspect Surtsey in 1963, just after it emerged from the ocean.

Geologists and biologists are about to pierce one of the world’s youngest islands: tiny Surtsey, which was formed by a series of volcanic eruptions off Iceland's southwestern coast between 1963 and 1967. Next month, the team plans to drill two holes into Surtsey’s heart, to explore how warm volcanic rock, cold seawater and subterranean microbes interact1.

It will be the most detailed look ever at the guts of a newly born oceanic island. “Surtsey is our best bet at getting a detailed picture of this type of volcanic activity — how ocean islands start to form,” says Magnús Guðmundsson, a volcanologist at the University of Iceland in Reykjavik.

The results could help to explain how hydrothermal minerals strengthened the island’s rock, enabling it to withstand the pounding of the North Atlantic Ocean. Engineers might be able to use those secrets to produce stronger concrete.

And deep within Surtsey, scientists plan to learn more about how buried microbes munch on rock, extracting energy from minerals and hot fluids. “If we can address this, we will get a lot closer to answering what role the deep crustal biosphere plays in maintaining and shaping our present-day environment,” says Steffen Jørgensen, a geomicrobiologist at the University of Bergen in Norway.

One of the two holes will parallel a 181-metre-deep hole drilled in 1979, allowing scientists to compare how microbial populations change over time. The second hole will go in at an angle, to explore the hot water percolating through a network of cracks within the volcanic craters that make up Surtsey. If all goes well, both holes will penetrate into the original sea floor, as it stood before the 1960s eruptions, about 190 metres down.

At just 1.3 square kilometres, Surtsey is a natural laboratory for researchers to study the biogeographic evolution of newborn islands as they are seeded by plants and colonized by seabirds. It is a United Nations Educational, Scientific and Cultural Organization (UNESCO) World Heritage site, set aside strictly for science. “This is one of the most pristine environments on Earth,” says Marie Jackson, a geologist at the University of Utah in Salt Lake City and principal investigator for the US$1.4-million project, which is supported in part by the International Continental Scientific Drilling Program.

On 28 July, Iceland’s coast guard plans to begin moving 60 tonnes of drilling equipment and other supplies to Surtsey, over the course of some 100 helicopter flights. “This is the most complicated logistics operation I’ve taken part in,” says Guðmundsson. Strict environmental regulations require all waste to be removed from the island, including the sterilized seawater that functions as drilling fluid. Only 12 people will be allowed on Surtsey at any given time, even as drilling proceeds 24 hours a day. Others will stay on the neighbouring island of Heimæy, where a warehouse will temporarily be repurposed into a core-analysis lab.

Microbiologists have continued to monitor the 1979 hole, where the maximum temperature has slowly cooled from 140 °C to about 130 °C (see ‘Going deep’). It is now rife with a host of microorganisms that are probably indigenous to Surtsey, says Viggó Marteinsson, a microbiologist at the Matís food- and biotechnology-research institute in Reykjavik2. These organisms are thought to have colonized the rock from the seawater below, protected from contamination from above by scorching rock. Marteinsson expects to find similar types of microbe, including bacteria, archaea and viruses, in the new hole. 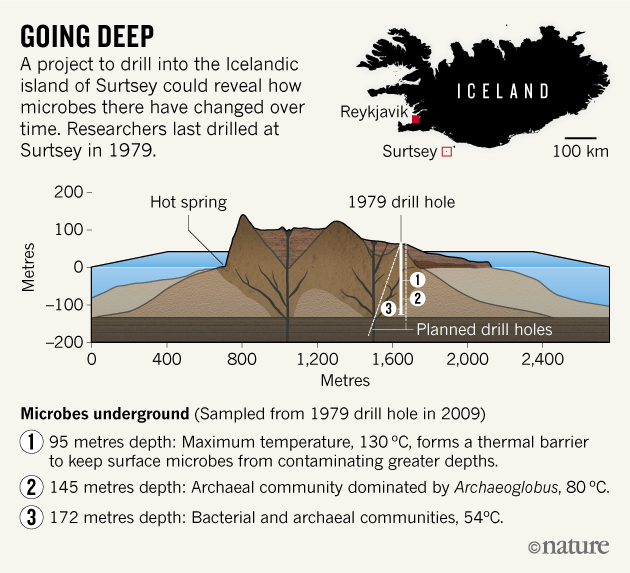 After the new hole is drilled, engineers will lower five incubation chambers to different depths. These will remain in place for a year before they are retrieved so that researchers can determine what organisms colonize them. Monitoring what microbes move in, and how quickly, will offer scientists an unprecedented chance to study how the deep biosphere evolves in space and time, Marteinsson says.

Meanwhile, geologists and volcanologists on the team will be investigating the second, angled hole. “That will allow us to reconstruct the way subsurface layers are connected — what we call the structure of the volcano,” says Jocelyn McPhie, a geologist at the University of Tasmania in Hobart, Australia.

The drilling should reveal the earliest stages of the Surtsey eruption — before it broke the surface of the ocean in November 1963, catching the attention of the cook aboard a passing fishing vessel. In the mix of seawater and heat, hydrothermal minerals formed within the volcanic rock. This made the rock less porous and helped to buttress it against erosion from waves. The drill core should reveal how these minerals were created over time, Jackson says, and modern scientists might be able to take hints from this process to build stronger concrete for structures such as nuclear-waste containers.

Thus strengthened, Surtsey’s core is likely to remain an island for thousands of years, says Guðmundsson. That’s in stark contrast to many volcanic islands, such as one that appeared near Tonga in 2014 but has already eroded by 40%3. “Because the vast majority of these islands disappear, we most likely substantially underestimate the number and volume of eruptions occurring at or just below sea level in the ocean, and hence the associated volcanic risk,” says Nico Fournier, a volcanologist with the GNS Science research institute in Taupo, New Zealand.

Whatever comes out of the Surtsey drilling, it should dramatically advance the snapshot gleaned from the 1979 project, says James Moore, an emeritus geologist with the US Geological Survey in Menlo Park, California, who was a leader of the earlier effort. “We made a lot of estimates that are going to be tested now,” he says. “It feels wonderful.”