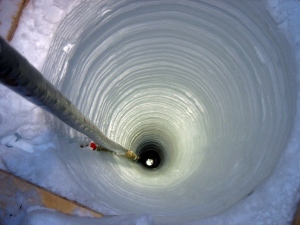 Detectors sunk deep into the ice of Antarctica have caught neutrinos oscillating at high energies.

The IceCube Neutrino Observatory, a telescope at the South Pole that detects the subatomic particles known as neutrinos, has measured the highest-energy neutrino oscillations yet.

IceCube was designed primarily to study neutrinos streaming from astrophysical objects such as supernovae and γ-ray bursts. But the detection of neutrino oscillations — the transformation of one type of neutrino into another — represents new scientific territory for the experiment, an area that falls under the umbrella of particle physics.

“This is our first step into particle physics,” says Andreas Gross, a postdoctoral researcher at the Technical University of Munich, Germany, who led the oscillation analysis.

While the results are relatively unsurprising, IceCube researchers say they may eventually be able to contribute to an explicit understanding of the neutrino mass hierarchy, or which of the three known neutrino types, or ‘flavours’, is the heaviest and which is the lightest.

Gross presented the analysis on Monday at the twenty-fifth International Conference on Neutrino Physics and Astrophysics in Kyoto, Japan. The conference also marks the first time that the team has presented data gathered from the full sensor array, which was completed in December 2010.

Gross’s analysis shows a disappearance of atmospheric muon neutrinos as they oscillate into tau neutrinos. Roughly 300 trillion of these atmospheric neutrinos are created every minute as cosmic rays collide with air molecules in the Earth’s atmosphere, says Francis Halzen, a physicist at the University of Wisconsin­–Madison and the principal investigator for the IceCube collaboration. IceCube detects only about ten atmospheric neutrinos per hour. The energy of the oscillating neutrinos fell between 10 and 100 gigaelectronvolts (GeV), with the strongest oscillation signal coming at about 30 GeV.

Although such muon-to-tau oscillations have been well studied by accelerator-based neutrino experiments at lower energies, the results confirm that the oscillations behave as suspected in higher-energy ranges. The agreement with theory also indicates that the IceCube detectors are working. Mark Chen, a physicist at Queens University in Kingston, Ontario, and director of the SNO+ neutrino experiment now being built in Sudbury, Ontario, says that the results provide a “new test” at higher energies. “It’s always good to test models and test observations,” he says.

Researchers at Super-Kamiokande, a neutrino experiment near Higashi-Mozumi, Japan, have also detected a small number of high-energy oscillations. However, Yoshitaka Itow, a Super-Kamiokande physicist at Nagoya University in Japan, says the experiment’s energy resolution above 10 GeV is very poor and that above 50 GeV, the experiment cannot resolve the energy of the oscillating neutrinos at all, so it cannot match IceCube’s new claims.

The IceCube detector consists of 86 strings, or long chains of photomultiplier tubes, spaced equally over an area of about 1 square kilometre, and dropping to depths of 1.4–2.4 kilometres below the surface of the ice. When a neutrino interacts with a water molecule, the reaction causes a faint flash of light that is detected by the photomultiplier tubes and translated into a digital signal.

Most of the time, IceCube scientists will be studying the neutrinos above 1,000-GeV that emanate from astrophysical sources. But to get at neutrino oscillations, they must aim to catch lower-energy neutrinos, because the probability of oscillations taking place decreases with increasing energy. Above a few hundred GeV, oscillations of the three known neutrino flavours become too rare to be worth searching for. So in 2009, the IceCube researchers installed the observatory’s first infill. Called DeepCore, the infill consists of eight photosensor strings grouped closely together in the deepest, clearest ice in the IceCube array. DeepCore provides precision measurements in the range of tens of GeV to a few-hundred GeV.

The IceCube collaboration is now discussing the possible addition of a second infill, called PINGU (Phased IceCube Next Generation Upgrade), which would group an additional series of strings in DeepCore and allow IceCube to detect oscillations as low as a few GeV. At these lower energies, IceCube can detect not only more oscillation events but also, its researchers hope, ‘matter effects’, a phenomenon where neutrino oscillations in matter are different from neutrino oscillations in a vacuum. This effect is caused by the interaction between electron neutrinos and electrons in matter, which changes the effective mass of the neutrinos. Observing matter effects might make it possible to learn more about the neutrino masses, including the neutrino mass hierarchy.