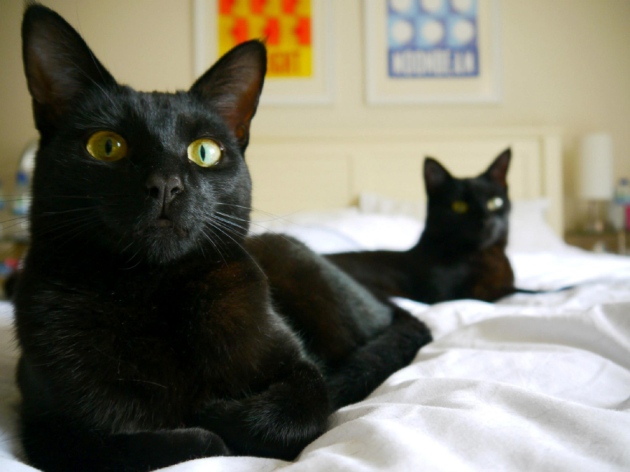 The cat genome is out of the bag, and has already helped to pinpoint a gene involved in kidney disease.

Cats may have beaten dogs on the Internet but felines have been a rare breed in genetics labs compared with their canine counterparts. Now, at last, cats are clawing their way into genomics.

At a meeting this week in San Diego, California, a close-knit group of geneticists unveiled the first results from an effort to sequence the genomes of 99 domestic cats. The work will benefit both humans and felines, the researchers say, by mapping the mutations underlying conditions that afflict the two species, such as kidney disease.

“It’s a great time to be in cat genomics,” says William Murphy, a geneticist at Texas A&M University in College Station who is involved in the effort. Plummeting costs for DNA sequencing now make it possible to do genomics cheaply — and cat genomics, long under-funded compared with similar efforts in dogs, is benefiting, he says. “We’re finally at the point where we can do all sorts of things we wanted to do 5 or 10 years ago.”

The first cat genome sequence1 — from an Abyssinian named Cinnamon — was reported in 2007. But the sequence contained significant gaps and errors, which slowed efforts to map genes. A high-quality version of Cinnamon’s genome was not published2 until late 2014. Domestic dogs, meanwhile, have become a darling of geneticists: their full genome3 was reported in 2005, and the sequence has been continually improved. Hundreds of genes underlying canine diseases and traits are estimated to have been discovered, compared with as few as a dozen for cats.

The discrepancy can be traced back to the early 2000s. After the completion of the human, mouse and rat genomes, the US National Institutes of Health organized a commission to decide on their next target; the dog genome was selected for high-quality sequencing, whereas cats were put on hold.

That got some cat geneticists’ backs up. “The truth is there were more powerful people interested in dogs,” says Stephen O’Brien, director of the Theodosius Dobzhansky Center for Genome Bioinformatics in St Petersburg, Russia, who led the initial cat-sequencing efforts.

But canine researchers were able to make a compelling case. Pet dogs suffer from many of the same conditions as humans, from narcolepsy to arthritis. And the intensely inbred nature of dog breeds made it relatively easy to identify disease-causing genes: because there is little genetic variation within any particular breed, the genes that cause disease in affected individuals stand out.

Dogs had other advantages, too. The existence of kennel clubs, which maintain ‘breed standards’ and are full of enthusiastic pet owners and veterinary surgeons, helped dog geneticists to recruit subjects for study. “Given the resources they had, they were discovering new genetic diseases in breeds almost daily,” says Niels Pedersen, a veterinary scientist at the University of California, Davis.

“I would love to eradicate all genetic disease in cat breeds before we’re done.”

In fact, both cats and dogs offer insights into human disease, including those associated with old age. In 2004, a team led by geneticist Leslie Lyons of the University of Missouri in Columbia (and owner of two female cats, Withers and Figaro) discovered that mutations that cause polycystic kidney disease — a major cause of renal failure in older individuals — occur in the same gene in humans and cats4. Cat versions of type 2 diabetes, asthma, retinal atrophy and numerous other conditions have close similarities to human disease. Cats can also become infected with a virus that is closely related to HIV and experience symptoms similar to those of people with AIDS.

In the hopes of speeding up the discovery of genes related to these conditions last year, Lyons launched the 99 Lives cat genome sequencing initiative, playfully hosted on a site called Lyons’ Den. She discussed the effort on 11 January at the Plant & Animal Genome conference in San Diego.

Lyons’ team is cobbling together funding from anywhere it can find it. The researchers are asking private owners, breeders and even pet-food companies to donate the US$7,500 needed to sequence the genome of a single cat, which could be one of a donor’s choice. “Any cat can participate. Any owner can participate,” she says. All the data will be made public after the results are published.

With the money raised so far, the team has sequenced the genomes of 56 cats, including fancy breeds such as Burmese; cats with specific diseases; and a kitten named Dragon and his parents Ares and Marcus — the hope is to use the feline trio to narrow down the genetic basis for traits they share, such as their silver, curly coats.

Even Robert Wayne, a canine geneticist at the University of California, Los Angeles, agrees that Lyons’ effort is important. “I hope she raises money for it,” he says.

Insights from cat genomics extend beyond disease. Razib Khan, an evolutionary geneticist at the University of California, Davis, wants to use genome sequences to chart the domestication and spread of cats throughout the world, and to determine how different domestic and wild cats are genetically. “There’s always the question — are they domesticated at all?” he says. The 2014 publication that included Cinnamon’s genome already identified differences between domestic and wild cats, including genes expressed in the brain that are possibly linked to the docility of (some) house cats. “Wild cats will hand you your behind if you get next to them and domestic cats will sit on your lap,” O’Brien notes.

Lyons is also keen to see genomics help felines. “I would love to eradicate all genetic disease in cat breeds before we’re done,” she says. Her team’s discovery of the cause of polycystic kidney disease has reduced its prevalence among Persians, by removing cats with the mutation from the breeding pool. Her lab is now developing drugs that could treat the terminal condition in cats — and perhaps in humans. But human health, Pedersen says, is not the only goal. “I’m in it, and Leslie’s in it, for the good of cats.”