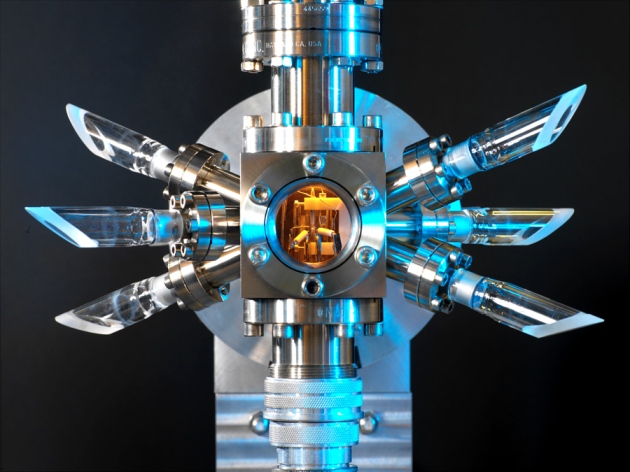 A strontium-ion optical clock housed at the National Physical Laboratory in Teddington, UK.

Happy birthday, caesium clock. Now move over. As the atomic clock used to define time itself turns 60, tests are set to begin on a new generation of clocks that are designed to give the caesium version a run for its money.

Such timekeepers would enable a variety of experiments, including testing whether the fundamental constants of nature really are constant over time, and, eventually, a more precise official definition of the second.

Atomic clocks track the frequency of electromagnetic waves emitted by atoms as they change energy states. First demonstrated by British physicist Louis Essen in June 1955, the caesium clock became the world’s official timekeeper in 1967 — defining the second as the time it takes for the microwaves that are absorbed or emitted when caesium atoms switch between states to cycle through 9,192,631,770 oscillations.

Over the past decade, various laboratories have created prototype optical atomic clocks, which use different elements such as strontium and ytterbium that emit and absorb higher-frequency photons in the visible spectrum. This finer slicing of time should, in principle, make them more accurate: it is claimed that the best of these clocks gain or lose no more than one second every 15 billion years (1018 seconds) — longer than the current age of the Universe — making them 100 times more precise than their caesium counterparts. Optical clocks are claimed to be the best timekeepers in existence, but the only way to verify this in practice is to compare different models against each other and see whether they agree.

Starting on 4 June, four European laboratories will kick off this testing process — the National Physical Laboratory (NPL) in Teddington, UK; the department of Time-Space Reference Systems at the Paris Observatory; the German National Metrology Institute (PTB) in Braunschweig, Germany; and Italy’s National Institute of Metrology Research in Turin. Between them, the labs host a variety of optical clocks that harness different elements in different experimental set-ups.

For the first test, each institute will transmit a signal related to the optical frequency of its clocks to a satellite, which will beam the frequencies back down to the other labs. This will allow the labs to compare the frequencies of light emitted by their clocks and thus measure whether they all keep time to the same beat.

“We all think our clocks have a very good potential for achieving the highest accuracy.”

“It’s really exciting,” says Andrew Ludlow, a physicist at an optical-clock powerhouse run by the US National Institute of Standards and Technology (NIST) in Boulder, Colorado, who is not involved in the project. “A couple of comparisons of optical clocks have been made before, but on nothing like this scale.” With more clocks, it should be easier to root out the source of any discrepancies, adds Helen Margolis, a physicist at the NPL.

She notes that a higher frequency does not necessarily mean a more accurate clock, because varying sensitivities to environmental factors can affect the ability of different clocks to keep time in practice. The hope is that all the clocks will agree, suggesting that they are as precise as claimed. If some clocks do not, it will indicate that improvements are needed.

The initial test is only a prelude to a more accurate test, however, because it has one big limitation: to beam light to a satellite, it must be converted to a microwave frequency — which means that much of the potential extra accuracy gained by using visible light is lost. By increasing the rate of data transfer, the European labs hope to improve the accuracy of current state-of-the-art satellite comparisons by ten, but it will still be limited to one part in 1016. So the main function of the satellite test is to build confidence in optical clocks and show that they perform at least as well as existing caesium clocks, say researchers.

The more accurate test will transmit signals in the visible spectrum through fibre-optic cables to the labs. This will allow the clocks to be compared with an accuracy similar to the expected accuracies of the clocks themselves. Some of the labs have already established such links, and tests have begun on sections between Paris and Teddington, and Paris and Braunschweig. “Eventually, this would allow a four-way comparison. That’s the vision,” says Margolis.

“There is friendly competition,” she adds. “We all think our clocks have a very good potential for achieving the highest accuracy or we wouldn’t be working on them.”

Fibre-optic links between optical atomic clocks already exist elsewhere, such as between the NIST lab and its partner lab JILA, also in Boulder. But these span shorter distances than the European network and are mostly between just two labs. “Europe is in a unique position as it has a high density of the best clocks in the world,” says Fritz Riehle, a physicist at PTB.

Even if the clocks pass this later test, usurping the caesium clock to create a more precise definition of the second will not be easy. International atomic time — on which coordinated universal time, or UTC, is based — is currently calculated by averaging measurements from hundreds of atomic clocks. Doing the same with optical atomic clocks would require a way to aggregate time at this precise level; using the fibre-optic method across oceans is not currently feasible.

In the meantime, ever more precise time is important for improving global positioning systems, high-resolution radio astronomy and the time-stamping of financial transactions, as well as spotting tiny variations in fundamental constants. “Most attempts to unify gravity with other forces would lead to variations of fundamental constants in the expanding Universe,” says Marianna Safronova, a theorist at the University of Delaware in Newark.