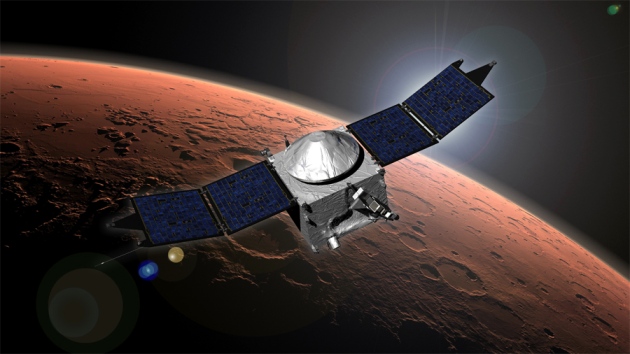 The first images from NASA’s Mars Atmosphere and Volatile Evolution (MAVEN) spacecraft show a planet losing parts of itself. Streams of hydrogen atoms drift away from the red planet, into the depths of space.

The pictures are the first clear look at how crucial elements erode away from the Martian atmosphere, says Bruce Jakosky, a planetary scientist at the University of Colorado Boulder and the mission’s principal investigator. MAVEN’s goal is to measure how the solar wind and other processes nibble away at Mars’s atmosphere, so that scientists can better extrapolate how the once-thick atmosphere has thinned over billions of years. That process transformed Mars from a relatively warm, wet planet into a mostly dry, frozen wasteland.

MAVEN began orbiting Mars on 21 September. The newly released images, from the craft's ultraviolet spectrograph, were taken while it was still relatively far from the planet, completing an elliptical orbit around Mars about once every 35 hours.

Hydrogen seems to be leaving the planet's atmosphere in clumps and streams that extend as far as about 10 Mars radii (roughly 34,000 kilometres) into space, said Michael Chaffin, a MAVEN scientist at the University of Colorado Boulder, at a 14 October news briefing.

The hydrogen comes from water vapour that breaks apart in the upper atmosphere. And because hydrogen is so much lighter than oxygen, it escapes into space relatively easily. “That’s effectively removing water from the Martian atmosphere,” says Chaffin. 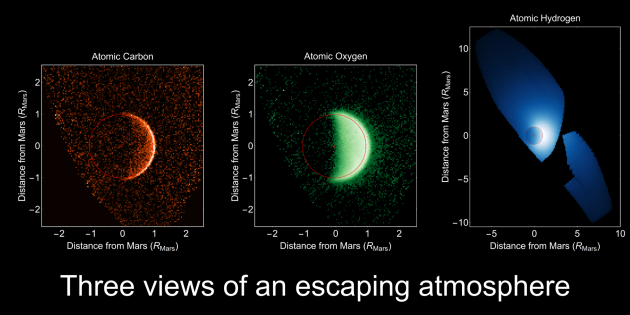 Other images show oxygen and carbon drifting away from the planet, although these heavier atoms cluster closer to Mars than hydrogen. Deep within the atmosphere, oxygen forms ozone molecules that accumulate near Mars’s south pole.

Since the pictures were taken, MAVEN has tightened its orbit and now circles Mars once every 4.6 hours. This closer vantage point will give it a more detailed look at how volatile substances are escaping from the atmosphere. But the craft will have a harder time seeing whether they might be travelling great distances from the planet.

Later this week, MAVEN will swivel its view away from Mars to take pictures of Comet Siding Spring, which is scheduled to pass Mars on 19 October at a distance of about 132,000 kilometres. MAVEN will also image the Martian atmosphere several days before and after the comet’s passage. Like other spacecraft currently orbiting Mars, it will shelter 'behind' the planet when the comet gets closest, to protect itself from a cometary dust cloud that could rush in at speeds of 56 kilometres per second.