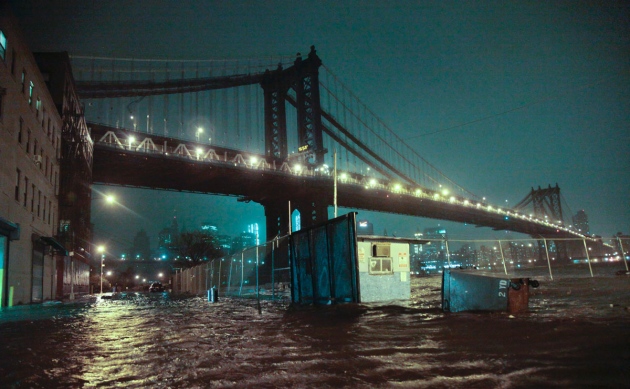 As Hurricane Sandy drove a 4.2-metre-high wall of salt water into the heart of New York city and the surrounding coast late on the evening of 29 October, scientists and engineers ticked through a nightmare checklist of predicted storm-surge effects that they had been drafting for more than a decade. Catastrophic flooding in low-lying areas? Check. Submerged tunnels and subway lines in lower Manhattan? Check. Damaged electricity substations and widespread power outages? Check.

“All of our predictions came true,” says Malcolm Bowman, who specializes in storm-surge modelling at Stony Brook University in New York. Bowman has argued for building storm-surge barriers around New York for more than a decade. Sandy’s arrival, Bowman says, stands as sad proof that current policies are woefully inadequate.

In a single night, the massive storm dealt a crippling blow to one of the world’s foremost economic and industrial hubs, destroying thousands of homes and leaving millions of people without electricity or reliable access to food, water and petrol. A week later, outlying neighbourhoods were still in crisis. Like Hurricane Katrina in 2005, Sandy quickly came to embody the nebulous threat of global warming while reviving discussions about how best to prepare New York and other coastal areas for a future of rising sea levels and a more volatile climate. And a topic largely ignored by both major political parties throughout a long and combative presidential campaign suddenly took centre stage just days before the election.

Sobered by climate scientists’ predictions that a warming atmosphere and rising sea levels are likely to bring large storms to the US east coast with increasing frequency, political leaders in the region raised the alarm about the long-term threat. On 31 October, New York governor Andrew Cuomo called for “fundamental rethinking of our built environment”. A day later, New York city mayor Michael Bloomberg cited the storm as he offered a surprise endorsement of President Barack Obama over Republican challenger Mitt Romney. Bloomberg, who had previously expressed disappointment in both candidates, now praised Obama’s efforts to lower carbon emissions with tighter regulations on coal plants and higher fuel-economy standards for vehicles. He also praised Romney’s role in developing a regional cap-and-trade scheme as governor of Massachusetts, but then blasted him for reversing course on climate during his presidential run. “I want our president to place scientific evidence and risk management above electoral politics,” Bloomberg wrote.

Sandy was fuelled by surface waters that were roughly 3 °C above average along the east coast. Only a fraction of that — roughly 0.6 °C — can reasonably be attributed to global warming. But even though scientists are loath to attribute any given weather event to global warming, hurricanes are demonstrably increasing in power “and have been for the past 20 years”, says Kerry Emanuel, a hurricane expert at the Massachusetts Institute of Technology (MIT) in Cambridge.

Sandy was unusual not only in its power but also in its course. Tropical cyclones that move so far north at this time of year are often swept out to sea. But a high-pressure system south of Greenland forced it inland, where it merged with a traditional winter storm system moving in from the west.

Two studies published in February and March this year1, 2 suggest that warming due to increasing ice loss in the Arctic Ocean could be altering regional air circulation, causing a more meandering jet stream. The net effect, researchers say, is an increase in the likelihood of severe winter storms and other extreme weather events across the United States, Europe and northern China. Although the idea remains controversial, some scientists wonder whether the same phenomenon could lead to an increase in hurricanes such as Sandy and Irene, which last year roared up the coast from North Carolina to New York and came perilously close to flooding the city as Sandy did. “These are very early days, but I happen to think it’s a very promising line of research,” says Emanuel, who was not involved in the studies.

A study of tidal-gauge records dating back to 1923 and published last month3 found that the likelihood of large surge events roughly doubles during warm years compared with cold years. New York is at particular risk, according to a study published in February4 by Emanuel and other scientists at MIT and Princeton University in New Jersey. By 2100, more intense storms and a potential sea-level rise of one metre could combine to cause flooding in the city every 3–20 years on a scale now seen once a century. 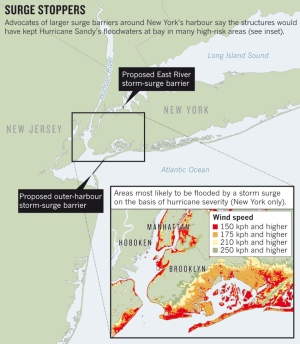 The storm has added new urgency to discussions of adaptation in forums including the New York City Panel on Climate Change, which Bloomberg set up in 2008. Bowman and others have advocated a system of sea barriers or dykes, similar to those constructed in London, the Netherlands and more recently in St Petersburg, Russia. “If we had implemented a regional barrier system, there would have been no significant damage” within New York’s harbour, he says.

The system envisaged by Bowman and others would include an 8-kilo­metre-wide barrier approximately 6 metres high that could be opened and closed at the entrance to New York’s harbour, and a second barrier at the entrance to Long Island Sound (see ‘Surge stoppers’). He puts the cost at around US$15 billion, about the same amount that Congress allocated to the US Army Corps of Engineers in 2005 to build a storm-surge barrier system around New Orleans. Estimates put the damage caused by Sandy at between $30 billion and $50 billion.

Some scientists worry that a single focus on sea barriers could be counterproductive. By disrupting river outflow and increasing sedimentation, such barriers could alter ecosystems. And by diverting storm surges, they might exa­cerbate flooding in areas that are not protected, such as Jamaica Bay in southern Brooklyn. Moreover, sea barriers do not protect against severe rain storms that generate inland flooding.

“Sandy clearly shows that we have to do the barrier studies now,” says Cynthia Rosenzweig, co-chair of the New York climate panel and a senior scientist at NASA’s Goddard Institute for Space Studies in New York. “But I think we need to consider an integrated and holistic set of solutions, and not put all of our eggs in the barriers.”

New York has already begun to implement a broad plan drawn up in 2007 to make the city more resilient to the expected effects of climate change by moving electrical equipment out of basements and adopting new urban seashore designs that can withstand occasional flooding. It remains unclear how much these efforts might have helped to lessen the impact of last week’s storm. But as the city and the region restore basic services in the coming days and weeks, Rosenzweig says, scientists and government officials must ensure that any rebuilding is done with the long view of global warming in mind.

“Although we may not see a storm of this magnitude for some time,” Rosenzweig adds, “the adaptation process in the city must continue moving forward.”