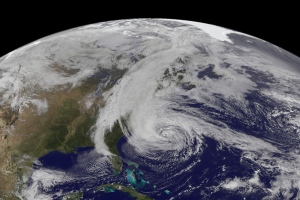 The United States is reeling under the impact of a massive hurricane named Sandy, the second to hit the northeastern states in two years. Flooding and widespread blackouts have crippled New York city and parts of New Jersey. Even the upcoming US election is taking a back seat, as President Barack Obama has quit the campaign trail to oversee the federal response. Throughout, there has been frequent talk of global warming as a potential driver of such events, but scientists and the media are still struggling with how to communicate the complexities. Nature takes a look at the science behind the storm.

What is making Hurricane Sandy so devastating?

Why is it unusual?

Hurricane Sandy is potentially unprecedented, officials say, because of the meteorological context within which it has developed. First, before reaching land, it was feeding off unusually warm surface waters in the Atlantic Ocean. Second, whereas such storms tend to skirt the US coast before drifting to the northeast and dissipating at sea, Sandy has been influenced by a high-pressure system off Greenland that has forced it inland. In doing so, the storm has merged with a winter system moving in from the west, putting forecasters in the unusual position of having to issue snow advisories for a tropical-hurricane system. Finally, the effects of the storm may have been enhanced by a full Moon, which generally means higher than average tides.

What is the link to global warming?

Some scientists point out that we might expect to see more of these types of severe weather events in a warmer world — even if any one storm cannot be directly attributed to global warming. Earlier this month, a team at the Beijing Normal University in China found that big storm surges have increased in frequency since 1923, and that large-scale events are roughly twice as likely in warmer years than in colder ones1. Others have talked about the potential that summer sea ice melt and increasingly open waters in the Arctic Ocean might be altering the flow of the jet stream that circles the Northern Hemisphere, leading to both hurricanes and the large winter storms that have hammered the northeast in recent years.

But the issue is far from settled, and climate change is not the only factor. For example, although sea surface temperatures are currently about 3 °C above average along the Atlantic coast, the expected increase due to global warming is just 0.6 °C, according to Kevin Trenberth, a climate scientist at the National Center for Atmospheric Research in Boulder, Colorado. So while the changing climate certainly plays a part, Trenberth says, there is plenty of space for natural variability.

Going forward, higher sea levels due to global warming are expected to compound the threat of more intense hurricanes. According to a modelling study by researchers at the Massachusetts Institute of Technology in Cambridge and Princeton University in New Jersey, published in February in Nature Climate Change2, the combined effects of climatology and a 1-metre increase in sea levels could mean that 100-year surge events occur every 3–20 years by the end of the century.

What does this mean on the ground?

The storm hammered much of the US east coast and an estimated 20% of the US population, from the Carolinas to New England. It drove an enormous storm surge as the anticlockwise winds sent water towards the coast to the north of the storm's centre, leading to severe flooding in many areas. In New York city, officials said that the surge may have broken a record set nearly 200 years ago, having flooded tunnels and subways. Millions of people across the region are without power, and high water levels near New Jersey's inoperational Oyster Creek nuclear-power plant have prompted officials to put the facility on 'alert' — the second-lowest of a four-tiered warning system. Moreover, the storm could bring prolonged and intense precipitation as it moves inland. President Barack Obama has signed disaster declarations for 12 states.

How much is the damage expected to cost?

EQECAT, a consultancy based in Oakland, California, estimates that the economic losses from Hurricane Sandy could range from US$10 billion to $20 billion, and that insurance companies would be required to cover roughly half that. This is comparable to the $10-billion loss from Hurricane Irene last year, which included $6 billion in insured losses. Hurricane Ike wracked up $20 billion to $30 billion in damages in 2008, according to EQECAT, including insured losses of up to $12 billion.

How is the insurance industry dealing with evidence linking global warming to more intense storms?

This question has been ongoing for years, particularly for 'reinsurance' companies — the industry giants that insure insurance companies against major catastrophes. Nonetheless, Tom Larsen, a senior vice-president at EQECAT, says that the industry naturally focuses on the present, and that the impacts of climate change are both less clear and less pronounced today than they are expected to be in the future. “Few are directly accounting for global warming in their loss rates, but most are incorporating it into their strategic planning,” Larsen says.

How long is Sandy expected to last?

The storm, which now looks more like a typical winter storm than a tropical hurricane, is projected to continue moving north over the next two days, entering Canada on Thursday and Friday.