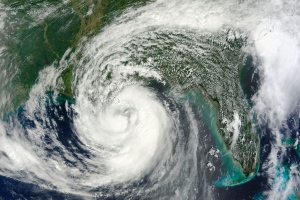 Hurricane Irene, a powerful storm that ran north along the US East Coast four days after a magnitude-5.8 earthquake rattled Virginia in 2011, may have triggered some of that earthquake’s aftershocks, scientists reported today at the annual meeting of the Seismological Society of America in Salt Lake City, Utah.

The rate of aftershocks usually decreases with time, says study leader Zhigang Peng, a seismologist at the Georgia Institute of Technology (Georgia Tech) in Atlanta. But instead of declining in a normal pattern, the rate of aftershocks following the 23 August 2011, earthquake near Mineral, Virginia, increased sharply as Irene passed by.

Scientists did not initially notice the unusual pattern, Peng said, because the aftershocks were small (many less than magnitude 2) and the hurricane itself produced a lot of seismic noise.“You have to use pattern-recognition techniques to detect small aftershocks buried by this noise,” Peng says.

His team used that approach to examine seismic records from the days following the main earthquake, identifying about 700 aftershocks — about 10 times more than had been previously reported using less-sensitive detection techniques.

Peng and Xiaofeng Meng, a graduate student at Georgia Tech, then compared the aftershocks’ timing to atmospheric-pressure readings in the earthquake zone, testing their hypothesis that a decrease in pressure caused by the storm's travel up the East Coast might have reduced forces on the fault enough to allow it to slip. That effect would be particularly strong for a thrust fault such as the one involved in the Virginia earthquake, Meng says. In that type of fault, one block of crust slides over another as the two blocks are pushed together.

But the team didn’t find the biggest increase in the rate of aftershocks at the time when barometric pressure was at its lowest. Instead, the big spike came a few hours later, as the storm was moving away. That may signal that the drop in atmospheric pressure wasn’t the mechanism by which the storm triggered aftershocks, Peng says. But he is confident that there was a change in the aftershock rate during the storm's passage.

The researchers are not the first to examine a potential link between hurricanes and seismic activity. Shimon Wdowinski, a seismologist at the University of Miami, Florida, says that he has found a strong correlation between extremely wet tropical cyclones striking Taiwan and big earthquakes that occur up to three years later. He thinks that the erosion of landslide debris in such a storm's aftermath triggers a change in fault loading, eventually producing an earthquake.

That work is not yet published. But another study by researchers in the United States and Taiwan found a similar association between slow earthquakes — which take places over hours or even days — and tropical cyclones in Taiwan1.

Still, Martin Chapman, a seismologist at the Virginia Polytechnic Institute and State University in Blacksburg, says that it is too early to pinpoint weather as the cause of the 2011 Virginia earthquake’s aftershocks. Other factors, such as tidal forces from the Moon, might also be at play, he says — and indeed, Peng’s data show some signs of a cyclical pattern that might correlate to tidal patterns. Chapman says that the next step is to compare these forces to the aftershock pattern unearthed by Peng’s team to see what, if any, role they might have had.

Peng agrees. “Basically, it’s a single case study,” he says. “Hopefully we will do this for other events as well.”