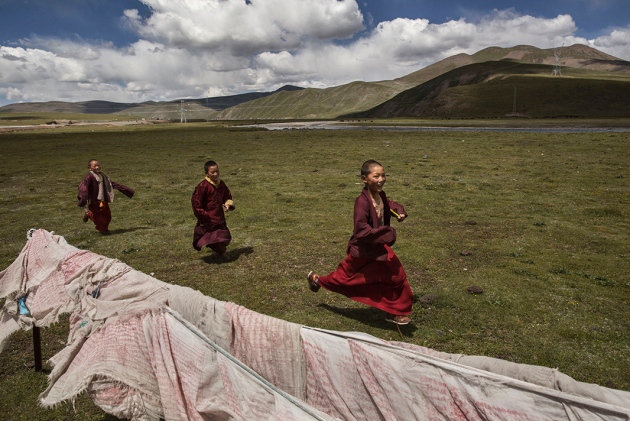 Buddhist monks on the high, cold Tibetan plateau, where humans may have lived year-round for more than 7,000 years.

Intrepid hunter-gatherers may have lived permanently in the cold, harsh environment of the oxygen-starved Tibetan Plateau at least 7,400 years ago — nearly 4,000 years earlier than researchers had thought.

The claim, made by archaeologists who have re-examined ancient hand- and footprints at a site in central Tibet, could shed light on how and why humans moved to live at high altitudes. And it fits with genetic studies suggesting that Tibetan people began to acquire physiological adaptations to help them cope with reduced atmospheric oxygen levels around the same time. But some researchers say the evidence is too scanty to confirm such early year-round habitation on the plateau.

With an average elevation of 4.5 kilometres, the air on the Tibetan Plateau has around half the oxygen present at sea level. “It’s the ultimate test for human survival and adaptation in extreme environments,” says Mark Aldenderfer, an archaeologist at the University of California in Merced, and a co-author of the new study, published on 5 January in Science1.

Scientists thought that people began to live there year-round — both in summer and in bitter winter — only about 3,600 years ago, when barley crops that can tolerate frost and cold temperatures were introduced, and farmers moved upland en masse2.

But Aldenderfer and colleagues argue that hunter-gatherers lived on the plateau long before agriculture took hold. Their evidence comes from a site called Chusang, northwest of Lhasa, a remote, high-altitude region more than 4 kilometres above sea level. Rocks that were once soft mud near a hot spring there retain impressions of human hand- and footprints, from at least six individuals, including some children3. Prehistoric stone tools have been found nearby, and pollen buried in the imprints suggest lush grasslands where wild animals could thrive — food for anyone who made the trek, says Aldenderfer. 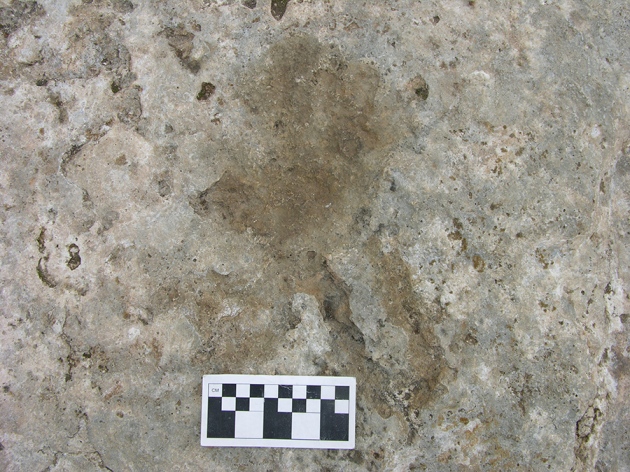 One of the human handprints at Chusan, on the Tibetan plateau; the prints have been dated to between 7,400 and 12,700 years ago.

Using three dating methods, the researchers, led by Aldenderfer and Michael Meyer, a geologist at the University of Innsbruck in Austria, found that sediments around the prints are between 7,400 and 12,700 years old. (An earlier study had put the sediments at 20,000 years old3, but it used a technique that tends to overestimate age, Meyer says.)

The site probably wasn’t visited only in summer, Aldenderfer says. Chusang is a long way from any habitable lowland spots in all directions. To visit and then return to a lower base camp would take at least a month over often impassable mountains; a more-plausible route would involve a round-trip time over two months, his team’s modelling study suggests. The travel distances involved are far longer than those undertaken by modern nomadic groups, Aldenderfer says, which suggests that those who left the prints lived in the area year-round.

The findings seem to fit genetic studies. Researchers completed sequencing the Tibetan genome last year, showing that the modern Tibetan gene pool was largely shaped between 15,000 and 9,000 years ago4. Based on that evidence, thousands of people may have migrated to the plateau during that time, argues Shuhua Xu, a population geneticist at the Chinese Academy of Sciences’ Shanghai Institutes for Biological Sciences who led the study.

Other studies have also suggested that Tibetans began to acquire genetic mutations that protected them from low blood oxygen levels between 12,800 and 8,000 years ago5–7. “Humans really had to have a permanent presence and, more crucially, reproduce on the plateau to obtain the necessary mutations,” says Xu.

Around 8,000–7,000 years ago, the Tibetan Plateau went through a warm, wet period, says Guanghui Dong, an archaeologist at Lanzhou University in China who co-led a 2014 study that examined how farmers spread to the plateau later on2. It’s possible that this expanded its resources, attracting humans to move upwards. Meanwhile, increasing competition for lowland resources could have pushed hunter-gatherers into marginal, harsh environments.

“It’s good to finally see that Chusang has some robust age estimates,” says Jeffrey Brantingham, an anthropologist at the University of California, Los Angeles, who studies the peopling of the plateau. The new study is exciting, but it doesn't prove year-round occupation, he says. “I'd say the jury is still out.” Signs of post-holes where tents might have been put up, or inferences of mid-winter occupation from preserved animal remains, would be more direct evidence, he says.

“Even if humans lived on the plateau permanently that early, it would have been a marginal existence involving only a small number of people,” adds Dong. “A large population could not have survived on the plateau year-round without agriculture,” he says.