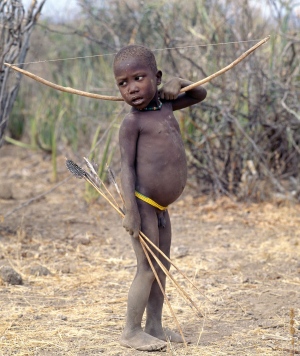 Genome sequences from African populations, like the Hadza in Tanzania, are adding to our knowledge of human genetic diversity.

Hundreds of human genomes have been decoded since the first in 2001, yet much of our species’ genetic diversity remains buried. Now, the sequences of 15 African individuals have uncovered millions of genetic variations that potentially influence risk of disease, infection and other traits1.

The researchers, led by Sarah Tishkoff, a geneticist at the University of Pennsylvania in Philadelphia, sequenced five individuals from each of three populations — Pygmies from Cameroon and the Hadza and Sandawe, both from Tanzania. Their genomes explain the basis of traits such as Pygmies’ short stature and show that humans in Africa interbred with now-extinct species. The study is published in Cell today.

The first individual genome sequence2 — Craig Venter’s — and most others since have come from Europeans and their descendants, and Asian genomes are also fast accruing. But Africans have remained genome sequencing's biggest blind spot, even though they possess the bulk of human genetic diversity because all other populations derive from Africans, says Tishkoff.

African genomics, Tishkoff says, is “practically non-existent”. Most of the African genomes sequenced so far are from a western-African population called the Yoruba. Former Archbishop Desmond Tutu, from South Africa, and a Namibian hunter-gatherer named !Gubi are two of the few people from elsewhere on the continent whose genomes have been sequenced very accurately3.

The new paper adds 15 more genomes. Tishkoff and her team found 13.4 million single-letter DNA variations, more than 3 million of which have not been seen before. All the other human genomes previously sequenced contain about 50 million of these singer letter differences.

Some of the new trove of diversity is likely to influence disease risk for conditions such as cancer and infectious diseases such as malaria and HIV. As a first pass, Tishkoff’s team looked for genes that evolved recently in the different hunter-gatherer populations, potentially as a result of adaptations to local environments. That search turned up genes involved in immunity, reproduction, metabolism and smell and taste perception.

The short stature of Pygmies — less than 150 centimetres — is another trait whose genetic basis may lurk in the new trove. In a paper published earlier this year4, Tishkoff and her team compared Pygmies and neighbouring populations across hundreds of thousands of single letter genetic variants, identifying a swath on chromosome 3 as likely to harbour many height-influencing genes.

The latest study narrowed this window. The five Pygmies sequenced share a set of 44 gene variants on chromosome 3 that are very rare in other African populations and are absent in Asians and Europeans. They also shared another variant in a gene called HESX1 that is linked to short stature and growth-hormone deficiencies in Europeans, and 11 variants near POU1F1, a gene involved in the development of the pituitary gland, which pumps growth hormones into the bloodstream.

Tishkoff speculates that altered pituitary function explains Pygmies’ short stature. She and her team aim to use transgenic mice and reprogrammed stem cells from Pygmy people to determine whether and how the gene variants they found influence height.

Studying more individuals from different Pygmy populations will also be important, says Paul Verdu, a geneticist at Stanford University in California, who was not involved in the study. Other studies of stature have shown that dozens  of gene variations have a hand in the trait.

Tishkoff’s team also found signs that the ancestors of the hunter-gatherers bred with different species of hominins, probably more than 40,000 years ago, she says, which supports earlier findings5 that humans living in Africa at times interbred with species of hominins that have gone extinct. This adds to previous evidence that humans elsewhere interbred with other hominins. Genome sequences obtained from fossils also suggest that humans, after they left Africa less than 80,000 years ago, bred with Neanderthals6 and other archaic hominin groups7.

Tishkoff says that her study highlights the need to better catalogue Africa’s genetic diversity. “There are about 2,000 ethnic groups in Africa and these are just three,” she says. “Imagine what else is out there.”