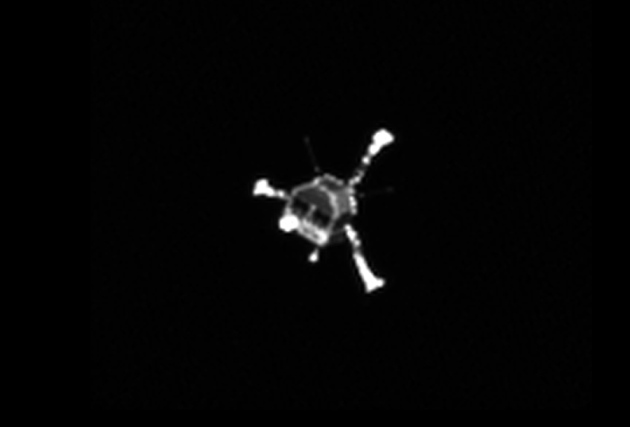 The Philae lander arrived on comet 67P on 12 November, but scientists lost contact with it just days later.

Scientists at the European Space Agency (ESA) are debating whether to change part of the Rosetta mission in what would probably be the last attempt to find lost comet-lander Philae — but the shift would mean sacrificing long-planned science.

Since its batteries ran out just days after a bumpy landing on 12 November, Philae has been silent, and its exact location remains a mystery.

Now ESA is considering launching what would probably be a final attempt to find it, at least during the primary mission of Philae's parent craft, Rosetta. Project scientists are debating whether to send Rosetta, which is still orbiting the comet, to swoop down just 6 kilometres over the patch where the lander is thought to be, the closest the craft has ever been to the comet 67P/Churyumov–Gerasimenko.

But Rosetta only has limited fuel, and any attempt to look for Philae would mean scrapping another flyby, sacrificing a chance to image the comet in a shadow-free shot that should reveal unprecedented detail. Growing activity on the comet in the form of jets of gas and dust also makes it increasingly risky for Rosetta to approach the surface. After the coming flyby, planned for Valentine's Day next month, Rosetta will not come this close again until 2016, once the comet has swung around the Sun and headed back out to space.

“If we are going to change plans to target looking for the lander, that impacts some of the goals we had planned,” says Joel Parker, a research astronomer at the Southwest Research Institute in Boulder, Colorado, and a member of the Alice instrument team for Rosetta. The debate involves weighing up the science goals of both options, as well as the chances of finding Philae, he says.

A process of deduction has put Philae’s location somewhere within a 20-metre by 200-metre strip, but efforts to find the 1-metre-wide lander in high-resolution images taken by Rosetta from 20 km out have so far failed.

Finding the lander is not just a matter of closure. There are scientific benefits to pinpointing its location, says Wlodek Kofman, principal investigator on Rosetta's CONSERT (Comet Nucleus Sounding Experiment by Radiowave Transmission) experiment, designed to send radio waves between the parent craft and Philae to study the comet’s interior. Not knowing the lander's exact location makes it much harder to process the data they have already received and generate accurate results, he says.

Spotting the lander would also help to determine its exact position and angle, and to predict how likely Philae is to come back to life. The craft may wake up in the coming months as the comet nears the Sun and its solar panels begin to receive more light . “Planning for something like that is a lot of work. It would be good to know if it [will happen],” he says.

But the tradeoff means that the decision is not an easy one, says Holger Sierks, who is principal investigator on Rosetta’s Optical, Spectroscopic, and Infrared Remote Imaging System (OSIRIS) instrument. The original mission plan had Rosetta performing a 'zero-phase' flyby from 6 km above the surface, which puts the Sun behind the craft and rids the image of shadows, which would teach scientists a huge amount about the comet's surface. “That’s a tricky trade to be made,” he says.

Altering Rosetta’s trajectory, which is laid out on a precise schedule several months in advance, would be a big effort for the mission, adds Matt Taylor, ESA project scientist for Rosetta. Others note that there is no guarantee that the flyby will be able to find Philae, whose shady position and tilting angle make it hard to spot.

The final word rests with ESA. According to the agency's manager for the mission, Fred Jansen, a decision is likely to be reached by the end of the week.

Kofman says an informal vote among Rosetta scientists came down narrowly on the side of looking for Philae. However, technical obstacles with changing the plans may yet mean that ESA is unlikely to do so, he adds.

Although members of the lander team still have hope that a future flyby could be adapted to support a search for Philae, Rosetta flight director Andrea Accomazzo says there is unlikely to be another dedicated search until 2016.

If ESA decides against a mission shift to hunt for Philae, the team could still get lucky: it may find clues as to Philae's whereabouts either in existing images or in new shots taken from flybys between 20 km and 50 km away in the coming months. Finding Philae in these kind of flybys is not impossible, "but it would be sheer luck", says Accomazzo. Although such images would not have greater resolution than existing shots, new angles could yet cast different shadows that help reveal the lander, adds Stephan Ulamec, Philae lander manager at the German Aerospace Center, near Cologne.

The main hope is that the lander will wake up. “I see us continuing with our plan and giving the lander a chance to tell us where it is on its own,” says Sierks.

Otherwise, attempts to pinpoint Philae's location may have to wait until 2016, once the comet has swung around the Sun and the original planned mission is completed, adds Accomazzo.