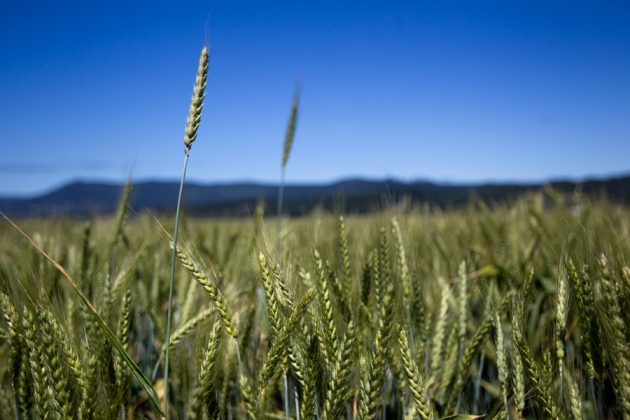 Wheat in a test field at Oregon State University where scientists are helping to identify a rogue GM crop.

It has been nearly three months since an Oregon farmer discovered unapproved transgenic wheat in a commercial wheat field, triggering bans on imports of US wheat into Japan and South Korea. The harvest season has now begun, and with the contamination proving to be an isolated event, imports into South Korea have resumed.

But as an army of combines marches across the wheat fields of eastern Oregon, the mystery of the transgenic intruders is fresh in the minds of investigators at the US Department of Agriculture (USDA), who are trying to trace the plants’ provenance to a particular research plot. Those close to the investigation say that the identity of the variety in question could emerge in the coming weeks, providing a much-needed breakthrough in this agricultural whodunnit. It could point to the cause of the release, which some have suggested could be activist sabotage. “We may never know who actually released it,” says James Moyer, director of the Agricultural Research Center at Washington State University in Pullman. “But if they know the genotype of those plants, they will be able to narrow it down quite a bit.”

Within a month of the discovery in May, USDA scientists had traced the origin of the plants to a line of herbicide-resistant ‘Roundup Ready’ wheat called MON71800, developed by the agricultural company Monsanto, based in St Louis, Missouri. Monsanto killed the project in 2005 over farmers’ worries that overseas customers would not buy US wheat if it contained transgenic varieties. No GM wheat has yet been approved to be grown commercially in the United States. The company says that all seed from the field trials — conducted on more than 400 hectares in 16 states (see ‘Sifting for GM wheat’) — was accounted for and either secured or destroyed. 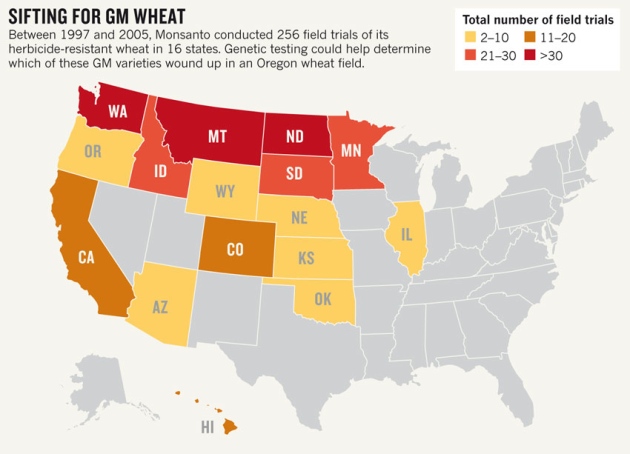 Monsanto had shipped MON71800 seed to breeders around the country for crossing with commercial varieties optimized for each region’s climate, day length and disease profile. Now, the USDA investigators are sifting through hundreds of markers to try to match the genetic signature of the contaminant Oregon wheat with one of the varieties from the 256 field tests registered with the USDA. An origin near Oregon could hint at an accidental escape; seeds from farther afield could mean that someone had intentionally saved seed and released it.

But pinning down the variety is difficult, says Michael Firko, the head of biotechnology regulation at the USDA’s Animal and Plant Health Inspection Service. USDA scientists have a limited amount of plant DNA to work with, and are proceeding cautiously in testing for single-base differences or variations in the number of copies of a repeated sequence that are unique to the various strains of wheat. “It takes time,” says Firko, “but we’re making good progress.”

Monsanto has already made clear its favoured explanation for the contamination: sabotage. “There are folks who don’t like biotechnology and who would use this as an opportunity to create problems,” the company’s chief technology officer Robert Fraley told reporters last month. Activists opposed to genetically modified crops are best known for destroying the plants rather than sowing them, but Fraley argues that those who illegally enter fields to demolish crops could also break into experimental plots to collect seed.

That hypothesis has little support among plant scientists contacted by Nature. “I suppose it’s possible, but it’s a very small possibility,” says Norman Ellstrand, a plant biologist at the University of California, Riverside. He says that any saboteur would have been taking a gamble that the GM wheat would be found. It only came to light in Oregon because the farmer had sprayed a non-GM wheat field with glyphosate (the herbicide to which the GM wheat is resistant) in preparation for a new crop, noticed a few remaining wheat plants and notified others of the discovery.

Fraley argues that the distribution of the contaminant plants suggests that a human hand cast them there. They were found in localized patches in only one of two wheat fields that had been planted with the same non-GM seed. But Robert Zemetra, a wheat breeder at Oregon State University (OSU) in Corvallis, says there could be other explanations for such a distribution. If, for example, the contaminant was a spring wheat plant in a winter wheat field, the transgenic wheat would flower and drop most of its seeds before the rest of the crop was harvested. Those seeds would fall straight down, generating a clump of herbicide-resistant offspring.

No explanation is completely satisfying, acknowledges Rene Van Acker, a weed scientist at the University of Guelph in Ontario, Canada. Van Acker and Zemetra carried out separate field trials of the wheat over a decade ago, and both say that Monsanto kept a close watch over the experiments. “We had to account for pretty much every seed in and every seed out, down to the gram,” recalls Van Acker. Zemetra not-so-fondly remembers hours spent disassembling harvesters and cleaning each part with an air-compressor, removing seeds with tweezers when necessary.

But Carol Mallory-Smith, the OSU weed scientist who first tested the Oregon plants three months ago, wouldn’t be surprised if one of the field-test seeds had escaped. She has found transgenic crops in stranger places. In 2009, for instance, she found transgenic sugar-beet seedlings in a bag of soil sold to gardeners. “There are so many places in the system where errors can be made,” she says. “Once we release these genes into the field, we should just assume that they are going to stay in the environment.”