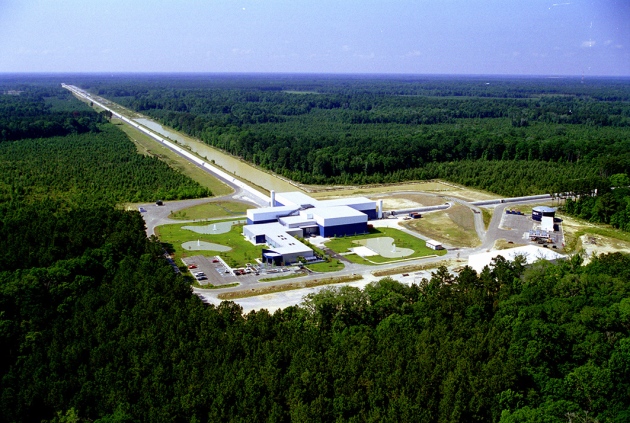 The LIGO Livingston Observatory in Louisiana sits in the middle of a pine forest.

Almost 100 years after Einstein presented the general theory of relativity in a Berlin lecture theatre, the quest to spot the gravitational waves he predicted may be entering its final stages.

This week, the world’s largest gravitational-wave facility is expected to start collecting data again after a 5-year US$200-million overhaul. The Laser Interferometer Gravitational-Wave Observatory (LIGO) searched fruitlessly for these cosmic ripples for almost a decade in the 2000s. But the odds that its improved version — known as Advanced LIGO — will detect any waves in the next three months may be as high as one in three, according to some of the physicists involved in the experiments.

Initial tests have shown that the observatory’s twin detectors, in Washington state and Louisiana, are performing as expected, says Gabriela González, spokesperson for the 900-strong LIGO Scientific Collaboration. And that is no mean feat for an instrument that has cost $620 million so far. “It’s the first time that anything in this field is on budget and on schedule,” says Karsten Danzmann, director of the Max Planck Institute for Gravitational Physics, in Hannover, Germany, who is not part of the LIGO management team.

According to general relativity, gravitation originates from the interplay between massive objects and the malleable fabric of space-time. Einstein predicted that accelerating masses such as colliding neutron stars or black holes would disturb that fabric and produce gravitational ripples that propagate through the Universe.

Each of LIGO’s detectors is designed to measure the deformation of space-time by comparing changes in the paths of laser beams that race down its two perpendicular 4-kilometre-long arms, bounce between mirrors and interfere with each other back at their source (see ‘To catch a wave’). When a gravitational wave passes through, it slightly alters the lengths of the arms, and the observatory can spot such changes with a sensitivity of one part in 1022.That is comparable to a hair’s-width change in the distance from the Sun to Alpha Centauri, its nearest star, says Laura Cadonati, a physicist at the Georgia Institute of Technology in Atlanta who will be coordinating the experiment’s data analysis.

A crucial part of the improvement is better damping of the vibrations caused by less-than-heavenly sources. The problem was especially acute at the site in Livingston, Louisiana, which is in the middle of a timber plantation. Any felling of trees would disturb the detector, so it could keep its laser beams ‘in lock’ — vibrating at precise frequencies — only at night or on weekends. A passing train would knock the site out for an hour, says physicist Brian O’Reilly, who will coordinate the follow-up of detections at the Livingston site. But now, he says, the detector should be able to take data over several days at a time without interruption.

Advanced LIGO is already three times more sensitive than its predecessor, but in three months’ time it will shut down for more improvements that will make it ten times more sensitive. When it reopens around 9 months later, it should be able to spot cosmic ripples from cataclysmic events — such as the collisions of black holes — up to 120 megaparsecs (326 million light years) away on a regular basis and sample a volume of space 1,000 times greater than the original observatory.

Next year, LIGO will be joined by a slightly smaller €200-million (US$226-million) Franco-Italian detector near Pisa, Italy, called Advanced Virgo, which is undergoing its own upgrade. The LIGO and Virgo teams will pool their data to check each other’s detections. They expect to see waves from mergers of binary neutron stars — events that should generate strong, predictable signals — but do not know precisely how many to anticipate. “It could be, depending on the models, ten binary neutron star detections a year or so,” González says. “But it could be 10 times higher or 100 times lower.”

“The first detections will be quite dramatic for us,” says Rainer Weiss, a theoretical physicist at the Massachusetts Institute of Technology in Cambridge who was one of LIGO’s founders. “The first thing we will need to sort out is whether we truly believe what we are seeing.”

Having detectors on different continents is crucial for providing a rough estimate of the origin of the waves, says Fulvio Ricci, a physicist at the Sapienza University of Rome and the spokesperson for Virgo. Once they know that, astronomers will be able to look for other signs of that event using electromagnetic radiation, such as X-rays or visible light.

Einstein published his first papers on gravitational waves in 1916. Detecting these ripples a century later, Weiss says, would be of “enormous symbolic importance”.