Even apparently straightforward traits can be controlled by complex genetics. A study on the roots of height in Pygmies — ethnic groups in which adult men grow to no taller than 150 centimetres — underscores how tricky it can be to find the genetic underpinnings of human characteristics.

A group led by Sarah Tishkoff, a geneticist at the University of Pennsylvania in Philadelphia, examined the genomes and heights of 57 people from Pygmy groups in Cameroon and 39 of their taller neighbours, from local Bantu-speaking populations. The researchers could not conclusively link specific genes to height, but did pinpoint a region of chromosome 3 containing genes that, they speculate, may be involved. Their study is published today in PLoS Genetics1. 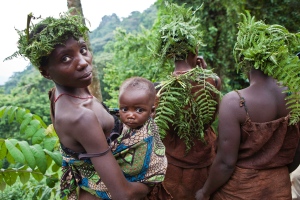 The genetic roots of African pygmies' short stature are hard to unpick.

“This study has tremendous value, because Pygmy height is one of those longstanding mysteries in biological anthropology,” says Edward Hagen, an anthropologist at Washington State University in Vancouver, Washington, who studies West African Pygmies. Nonetheless, he adds, the results don’t resolve the debate. “This study provides lots of clues, but no answers yet,” Hagen says.

The long and short of it

Pygmies and Bantus in West Africa have mixed for thousands of years, so the researchers first worked out which regions of the Pygmies' genomes reflected Pygmy or Bantu ancestry. They confirmed that the more Bantu ancestry someone had, the taller he or she was were likely to be, supporting the idea that Pygmy stature has genetic roots.

Then, the researchers examined the genetic variations unique to Pygmies. They looked for single nucleotide polymorphisms (SNPs) — variations in single bases of DNA — trying to find those that may have been favored by natural selection because they gave individual pygmies an advantage in surviving and passing on their genes. Some of these selected SNPs occurred in a region of chromosome 3 that differed between Bantus and Pygmies, and were linked to height when both Bantus and Pygmies were analysed. But none could be linked conclusively to height within the Pygmy population itself, possibly because relatively few Pygmies were included in the study, the authors speculate.

No SNPs were conclusively linked to Pygmy height in an analysis of all genetic variants regardless of whether or not they were under selection - again, the team guesses, because of the study's small sample size.

The team also examined 112 of the 211 SNPs that had been linked to height in Europeans; only one was linked to height in Pygmies. The team therefore speculates that the short stature of the Pygmies might involve different genetics from European height.

Tishkoff says that her paper highlights some of the challenges involved in studying the genetics of limited, ancient populations. Because it is not easy to collect DNA samples from Pygmies, this study examined far fewer people than is usual in studies of European height, which have themselves only explained about 10% of the genetic contribution to height in people with European ancestry.

Other researchers, such as Paul Verdu, a human geneticist at Stanford University in California, pointed out that Pygmy groups elsewhere in Africa and in other parts of the world are likely to have different genetic traits from the groups that Tishkoff studied.