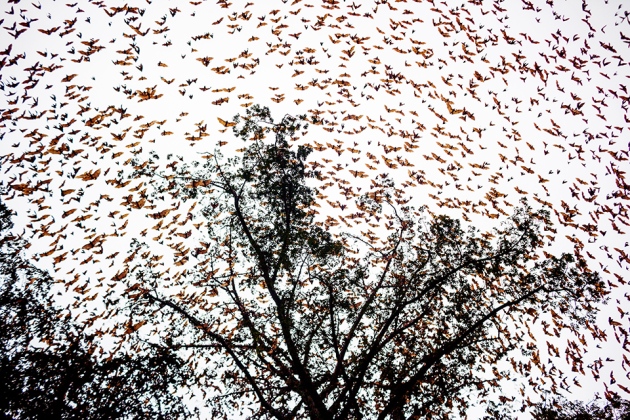 Bats are suspected to be a wild reservoir of the Ebola virus.

Update, 15 January: The World Health Organization announced on 14 January that all known chains of Ebola transmission in West Africa had stopped. But shortly afterwards, a death from Ebola was announced in Sierra Leone, underlining, as health officials have emphasized, the potential for new cases of the virus to emerge.

With the official end of Ebola transmission across West Africa anticipated on 14 January, an epidemic that killed more than 11,000 people in 2 years may be starting to fade into history. But that does not mean that Ebola has disappeared. The virus remains hidden in animal reservoirs, and is almost certain to spill over into humans again.

Spread of Ebola ends: 7 lessons from a devastating epidemic

“We’ve got to focus on what could potentially happen next,” says David Pigott, a spatial epidemiologist at the University of Oxford, UK — and that means uncovering the species that harbour Ebola in the wild to try to prevent deadly outbreaks in the future.

It is no easy task. Since the disease first emerged in Zaire (now the Democratic Republic of the Congo) 40 years ago, efforts to trace the origins of the outbreaks, including the most recent one, have come up frustratingly empty. Wild gorillas and chimpanzees in central Africa have experienced occasional Ebola outbreaks. But like humans, these species are too ravaged by the virus to serve as its natural host. Experts say that a reservoir species is likely to harbour the virus only at low levels, and without becoming sick.

The leading candidates are several species of fruit bat from across central and West Africa — where all known Ebola outbreaks have originated — that are often hunted for meat. A 2005 study1 uncovered Ebola genetic material in some fruit bats from Gabon and the Democratic Republic of the Congo, and detected Ebola antibodies in the blood of others. Marburg virus, which is closely related to Ebola, is thought to be transmitted by fruit bats.

“I firmly believe fruit bats are the reservoir for Ebola,” says Peter Daszak, a disease ecologist and president of EcoHealth Alliance, a conservation organization in New York City that plans to survey numerous bat species, including fruit bats, in Liberia for signs of Ebola infection.

Other researchers believe that focus is too narrow. “The evidence for fruit bats is the strongest, but it’s still weak,” says Fabian Leendertz, a wildlife epidemiologist at the Robert Koch Institute in Berlin.

Leendertz suspects another type of bat. He led a team that searched for the source of the latest West African outbreak in early 2014, a few months after a toddler in southern Guinea became the first human victim. The team captured dozens of bats near the toddler’s village, but none — fruit-eating or otherwise — showed any conclusive signs of Ebola infection2. Still, circumstantial evidence has led the researchers to suspect that the culprit may have been small insect-eating bats living in a tree near the toddler’s home. Although the tree had burned down before researchers arrived, it had been filled with such bats, and villagers told the team that children often played in its hollowed-out trunk. The team is now looking more closely at insectivorous bats, but Leendertz cautions against focusing on any one animal.

Some researchers advise casting the net even wider. “I don’t buy the bat story for Ebola virus, not at all,” says virologist Jens Kuhn of the US National Institute of Allergy and Infectious Diseases at Fort Detrick, Maryland. He thinks that bats are much too abundant and too closely associated with humans to explain an infection that has emerged just two dozen times over the past four decades. “It’s going to be a strange host,” he says. Even arthropods or fungi could be possibilities, he adds.

Others intend to look at more-familiar species. The US Agency for International Development plans a two-year survey of animals ranging from rodents to livestock to domestic dogs and cats. These animals may not be natural reservoirs of Ebola, but they could contribute to spillovers into humans, says Dennis Carroll, director of the agency’s Pandemic Influenza and Other Emerging Threats Unit.

But with so many question marks hovering over the identity of Ebola’s reservoirs, some scientists say that it is time to eschew virus hunting in specific creatures and instead pursue more-holistic approaches that examine ecological and anthropological factors common to spillovers.

Tony Goldberg, an epidemiologist at the University of Wisconsin–Madison, is one such advocate. He no longer subscribes to the view that “we have to blanket the continent of Africa with field-deployable DNA sequencers and sample everything that crawls, flies or swims and eventually we’ll come across it. I used to think that way,” he says, “but I’m cooling off to that approach.”

His team is studying how bush-meat hunters interact with wild ecosystems to identify factors that might be linked to the spillover of zoonotic infections such as Ebola.

In a similar effort, a team led by Pigott and his colleague epidemiologist Simon Hay is looking at past outbreaks for common ecological factors, such as vegetation, elevation and the presence of suspected reservoir species such as fruit bats and carriers such as apes. By modelling these data, the team has created a map of areas at risk of Ebola spillovers3.

And Barbara Han, a disease ecologist at the Cary Institute of Ecosystem Studies in Millbrook, New York, is using machine-learning techniques to predict which bat species are likely to harbour Ebola and related viruses because they share ecological factors common to suspected reservoir species.

Research on Ebola therapies and vaccines saw an infusion of public and private funding during the epidemic, and scientists hunting the virus in the wild hope to capture the same sense of urgency and financial support. But they know that the job won’t be easy. “It has lit a fire under people’s butts, mine included,” says Goldberg. “The problem is, we’re not sure what to do with the fire.”