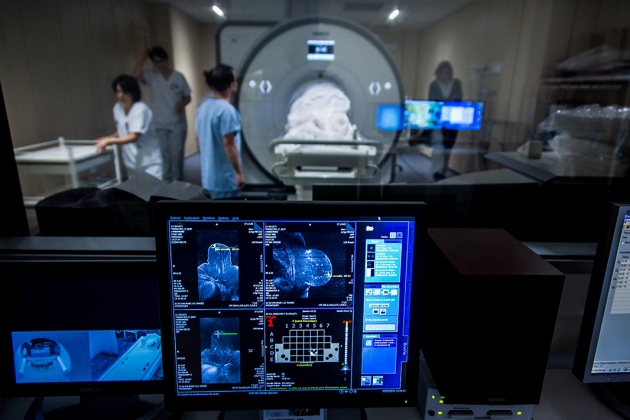 Biopsies can help track when a benign tumour turns malignant.

Databases worldwide are rapidly swelling with the sequences of thousands of cancer genomes. Now, some scientists are advocating that researchers shift their focus back in time: to study the DNA of tumours in their adolescence, before they commit to being cancerous.

At the American Association for Cancer Research (AACR) annual meeting in Washington DC, researchers gathered on 2 April to discuss the growing call to sequence the genomes of pre-cancerous lesions — abnormal growths that sometimes progress into full-blown cancers. The results could help researchers to determine which tumours warrant treatment and could aid the development of therapies to block cancers on the path to malignancy.

It is a project that is now near the top of the cancer research wish list, says oncologist Elizabeth Jaffee of the Sidney Kimmel Comprehensive Cancer Center at Johns Hopkins University in Baltimore, Maryland. “This is something that has really taken off throughout the cancer community,” she says.

The idea could be one of the next 'big science' projects for cancer. The idea is to borrow some tactics — such as coordination among scientists and sequencing centres — from The Cancer Genome Atlas, one of the first and biggest cancer genome efforts, which characterized the genomes of 33 cancers using samples from more than 11,000 people.

But the new 'Pre-Cancer' Genome Atlas would also study cancers over time. It would ideally include multiple snapshots of the same tumour as it developed, in the hope that researchers will be able to determine what changes pushed it across a tipping point to become cancerous.

Individual laboratories have already embraced this concept. Pulmonologist Avrum Spira of Boston University in Massachusetts has been studying the origins of lung cancer by sequencing samples from people with pre-cancerous lesions in their airways. Such biopsy samples are typically taken every 6 or 12 months.

Lung cancer, he says, seemed a logical testing ground for the sequence-over-time approach. It is the most common cause of cancer death worldwide. “The major reason: we almost always detect it late,” he says, adding that as his team carried out the sequencing, “it hit us that this could be a paradigm that applies to other cancer types”.

Thomas Kensler, who studies cancer prevention at the University of Pittsburgh in Pennsylvania, points to recent advances in characterizing thyroid cancer that have led to genetic tests to distinguish which tumours warrant treatment. “Not every lump in the thyroid is necessarily destined to be a cancer,” he says.

At the AACR meeting, cancer researcher and physician Rafael Bejar of the University of California in San Diego  presented his ideas for extending the model to include liquid tumours such as leukaemias. Normal blood is derived from many stem cells, and genetic sequencing can match blood cells to the stem cells from which they were derived. So if a blood test reveals that one lineage of stem cells is beginning to take over the population, it could be an early sign of cancer — and subsequent monitoring could reveal if the disease takes hold.

But a coordinated effort, says Bejar, could boost the impact of these individual projects. Last September, advisers to the US Cancer Moonshot initiative — an effort to double the pace of cancer research in five years — included a pre-cancer genome project among the schemes they recommended for investment. And Spira says that the project was discussed at a US National Cancer Institute meeting in late March, and will be taken up again at a meeting in June.

What the community wants next, say advocates of the programme, is a firm financial commitment to take the project from concept to reality. “There’s a lot of enthusiasm,” Bejar says. “People are moving forward.”