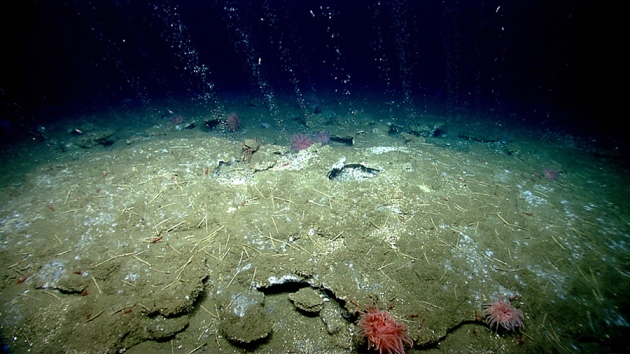 Methane bubbling from the seafloor at about 425 metres' depth off Virginia.

Plumes of bubbles streaming from hundreds of newly discovered sea-floor seeps between North Carolina and Massachusetts are likely to contain methane and could be adding as much as 90 tonnes of the planet-warming gas to the atmosphere or overlying waters each year, research published today in Nature Geoscience1 suggests.

An estimated two-thirds of the emissions emanate from sediments at depths where methane-rich ices may be decomposing due to warming waters along the ocean bottom, the researchers say. Effects of these plumes on climate and ocean chemistry are not yet clear, but could extend well beyond the plumes themselves.

The bubble streams showed up on sonar scans of the sea floor taken between September 2011 and August 2013 during oceanographic expeditions ranging from Cape Hatteras in North Carolina to Georges Bank off Cape Cod. Altogether, researchers analysed data covering a 94,000-square-kilometre arc (an area about the size of Indiana or Hungary) that includes the edge of the continental shelf and the steep slope just seaward of it, says co-author Adam Skarke, a geologist at Mississippi State University in Starkville. Within a distance of about 950 kilometres, the team found about 570 bubble plumes — an astounding number considering that scientists had previously reported only a handful in the region, he notes.

Although some of the plumes extended hundreds of metres above the ocean floor, the bubbles emanating from deep-water sources typically dissolved into the sea long before they could breach the surface, says Skarke.

“I’m not that surprised that people haven’t seen these things before,” says Tim Minshull, an oceanographer at the University of Southampton, UK, who was not involved in the work. “These features are quite narrow, sometimes just a few metres across, and the ocean’s a big place.”

Researchers have not yet collected samples of the bubbles, says Carolyn Ruppel, a geophysicist with the US Geological Survey in Woods Hole, Massachusetts, and a co-author on the study. Nevertheless, they are presumed to contain methane because of their sources, she notes. Some of the shallow-water seeps are likely to be in now-submerged areas that were methane-producing wetlands during the most recent ice age, when sea levels were more than 100 metres lower than they are today.

However, many of the sources along the continental slope lie at cold depths in which ices have formed at high pressures within sea-floor sediments, which once trapped methane produced by microbes living there. These ices may now be slowly breaking down because of the warming of overlying waters, says Skarke. At least one previous study2 has hinted that warming waters are destabilizing methane-rich ices at moderate depths farther south along the US Atlantic coast.

Sampling the bubbles, along with the waters in and around the plumes, will help scientists to estimate the effects of the methane emissions, says Skarke. The gas reacts with, and thereby diminishes, dissolved oxygen, a process that creates carbon dioxide that will tend to acidify surrounding waters.

“This is a very careful study that lays the groundwork for further research,” says Ronald Cohen, a geologist at the Carnegie Institution for Science in Washington DC, who was not involved in the study. Among other things, he notes, “scientists would like to know what these sources are, how much methane they’re producing, and how those sources vary over time.”

Although Skarke and his colleagues suspect that warming waters may be boosting rates of methane emission, the amounts of carbonate minerals seen at some deep sites visited by remotely operated vehicles — which are created by methane-munching microbes and typically accumulate at less than 5 centimetres per 1,000 years — suggest that some of the seeps have been active for a millennium or more.