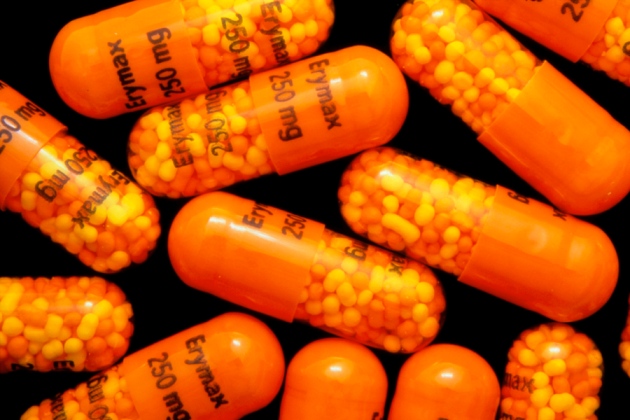 Erythromycin is a broad-spectrum antibiotic often used to treat infections of the skin, chest, throat and ears.

A 64-year-old class of antibiotics that has been a cornerstone of medical treatment has been dramatically refreshed by dogged chemists searching for ways to overcome antibiotic-resistant bacteria.

In work described today in Nature[1], a team of chemists built molecules similar to the drug erythromycin, a key member of the macrolide class, from scratch. In doing so, they were able to generate more than 300 variations on erythromycin that would not have been feasible by merely modifying the original drug — the way that scientists would normally search for new variants of existing antibiotics.

The process generated several variants on erythromycin that can kill bacteria that are resistant to the antibiotic. Although much testing remains before any of the molecules could be used in people, many of them show promise, says chemist Phil Baran of the Scripps Research Institute in La Jolla, California. He adds that the work holds potential for the future of antibiotics: “The fact that you can now make deeply modified analogues in a practical way with chemical synthesis opens the door to a whole host of derivatives that could never have been dreamt of before.”

Erythromycin was first isolated in 1952 from a bacterium in a soil sample taken from the Philippines. But natural erythromycin is a poor drug: although it can kill bacteria, it is unstable in the acidic environs of the stomach, and rearranges there to form a toxic compound. Chemists quickly became experts at modifying erythromycin to make it more stable and less toxic.

Over time, researchers had another reason to develop analogues of the molecule: the rise of erythromycin-resistant bacteria. But after decades of chemically altering the antibiotic, chemists were beginning to run out of options. “Chemists over the past 60 years have been incredibly inventive, but it’s extremely challenging to modify a molecule as complicated as erythromycin,” says Andrew Myers of Harvard University in Cambridge, Massachusetts. “And that’s all we’ve had for a long time.”

Myers and his team decided to go about the problem another way: by synthesizing variations of erythromycin from scratch. The work took five years and led to the discovery of new ways to manufacture molecules.

The team screened 305 of its macrolides against several bacterial strains. Most of the compounds had some antibiotic activity: 83% of them were active against Streptococcus pneumoniae, a bacterium that is susceptible to macrolide antibiotics. Some were also effective against strains that are resistant to multiple antibiotics.

The compounds have not yet been tested in animals, and additional chemical tweaks may be necessary to enhance their potency as well as their safety. Myers has founded a company called Macrolide Pharmaceuticals in Watertown, Massachusetts, to develop the compounds further.

But Baran, who calls the approach “daring” and “fearless” because it started from scratch, says that the success is a testament to the power of organic chemistry. “It shows the power of synthesis to revitalize what is one of the oldest classes of antibiotics.”