Using high-speed X-ray cameras, a team of scientists has discovered how hummingbirds manage to fly like insects despite the limitations of their bird skeletons. 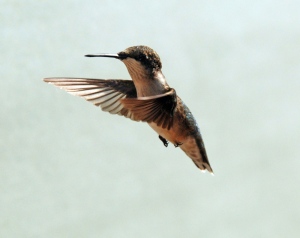 “It has adopted an insect-like flight style with the evolutionary heritage of a vertebrate,” says Tyson Hedrick, a biologist at the University of North Carolina in Chapel Hill, who led the study. “It has got essentially the same arm bones that we have but it’s doing this funny thing with its shoulder, flipping the wing back and forth like a fruit fly rather than a pigeon.”

By filming ruby-throated hummingbirds (Archilochus colubris) in flight, Hedrick showed that the birds invert their wings by twisting their wrists. “It looks like it’s affecting the whole wing because the bird’s skeleton is very compressed and its wrist isn’t very far from its shoulder,” says Hedrick.

German scientists had suggested as much in 19391, but Hedrick has finally confirmed their hypothesis.

The study, published today in Proceedings of the Royal Society B2, began with abandoned equipment. Researchers at Brown University in Providence, Rhode Island, where Hedrick was a visiting researcher, found that they could shoot cheap X-ray videos by retrofitting high-speed cameras onto old, disused X-ray systems. “The problem was that you’re confined to the volume of a football,” says Hedrick, who tried to think of animals he could study using the apparatus. Hummingbirds, which are small and hover in a particular spot, fit the bill perfectly.

At first, the technique did not work, and Hedrick saw only amorphous shadows. “The bird is so small and light that its bones are largely transparent to X-rays,” he says. He had to glue platinum beads to the birds’ skin to mark the positions of their bones.

The work is “well done and advances our knowledge of hummingbird flight”, says Chris Clark, a biologist who studies hummingbirds at Yale University in New Haven, Connecticut. “By using X-ray video, they could directly see how the bones of the wing move during flapping.”

The videos also showed that hummingbirds flap their wings by twisting the humerus (upper arm bone), rather than flapping it up and down from the shoulder like other birds. To understand the difference, Hedrick recommends trying to mimic a bird by flapping your arms. “You’re doing something not too different to what a seagull’s doing,” he says. To mimic a hummingbird, “hold your upper arm close to your body with your elbow on your hip, and flap your forearms back and forth”.

With these innovations, the hummingbird can efficiently deliver a lot of power to its wing with tiny contractions of its chest muscles. “The hummingbird has put its flight muscle in very high gear,” says Hedrick. “It manages to flip the wing through a 140-degree arc through this little twist.”

Insects do something similar. Small animals have to beat their wings faster than larger ones to stay aloft, and they risk losing muscle power in the process. Hummingbirds and insects have converged on the same solution: by using their muscles efficiently, they can produce a large amount of power with fast but small movements.

“The study is first rate, undertaken by the best in the field,” says Ken Dial, a biologist at the University of Montana–Missoula. “It will stimulate additional studies to explore similar mechanisms among other flying organisms, such as other birds and bats, over a large range of body sizes.”

Indeed, Hedrick wants to see whether larger hummingbirds, such as the Patagonian giant hummingbird (Patagona gigas) — which is  bigger than the ruby-throated one — move in the same way. But whereas the ruby-throated hummingbird is common in eastern North America, its larger relative sticks to the Andes mountains in South America. “We’d probably have to bring the X-ray rig to it,” says Hedrick.