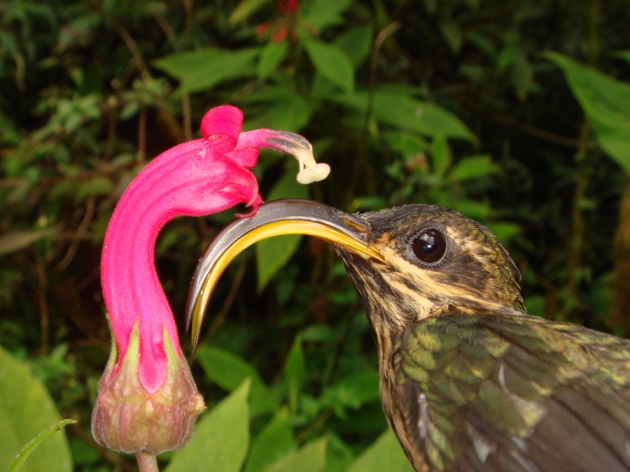 The buff-tailed sicklebill (Eutoxeres condamini) is one of many hummingbird species adapted to the ecosystems of the eastern Andes.

Hummingbirds took just 22 million years to diversify from a single common ancestor into 338 tiny, colourful species. And they have not finished yet.

Evolutionary biologist Jim McGuire of the University of California, Berkeley, and his collaborators have found that although some hummingbird groups have saturated the available space in their environments, others are still developing into new species at an extraordinary rate. By comparing their rates of speciation and extinction, McGuire's team calculated that the number of hummingbird species could double before reaching an equilibrium in the next several milllion years. The results are published in Current Biology1.

“This is unique evidence of one of the most spectacular known examples of an incomplete adaptive radiation,” says Juan Francisco Ornelas, an evolutionary biologist at the Institute of Ecology in Xalapa, Mexico. ('Adaptive radiation' is biologists' term for a rapid differentiation into distinct species.)

Hummingbirds are only found in the New World, and the majority of species live in South America. McGuire’s team carried out the largest-ever study of the group's evolution by comparing DNA from 284 species.

“It’s impressive,” says Robb Brumfield, a geneticist at Louisiana State University in Baton Rouge. “The samples they used are the product of 30-plus years of ornithologists lugging nitrogen tanks and collecting in remote regions” of Central and South America. The researchers collected tissue samples and needed to keep them frozen to allow for DNA sequencing.

The analysis showed that hummingbirds fall into nine major lineages, which have diversified from each other in South America over the past 22 million years. But they first diverged from a sister group — the swifts — around 42 million years ago, and fossils suggest that this split must have happened in Eurasia. “That’s a pretty big gap!” says McGuire. Hummingbirds cannot fly across oceans, so they must have travelled overland, crossing a land bridge over the Bering Strait into North America before heading south.

Once they reached South America they radiated dramatically — especially in the Andes. These mountains represent just 7% of the land area in the Americas, but they are home to 40% of hummingbird species. Many of these must have arisen within the past 10 million years. This was the time when the Andes started rapidly rising, which suggests a possible role of the mountains in stimulating diversification.

“The Andes are kind of the worst place to be a hummingbird,” says McGuire. These birds “have super-high metabolic rates and oxygen availability is low. It’s also harder to hover because of the reduced air density. And yet, they’re up there doing it.” Although some insects are known to forage at high elevations, he says that there are relatively few insects in the cold, high mountains, leaving room for hummingbirds to take their place pollinating flowers. The mountains also provide a smorgasbord of habitats, from isolated valleys to steep slopes with rapidly changing climates. Hummingbirds are well suited to exploit such niches.

But Ornelas says that McGuire and his team overstate the importance of the Andes environments. Judging from the bright colours, elaborate ornaments, spectacular courtship displays and complex calls typical of hummingbirds, sexual selection has almost certainly played a major part in their evolution.

Either way, hummingbirds are producing new species at a decelerating pace, probably because they are running out of space or ecological niches to fill. But McGuire found that some lineages have diversified 15 times faster than others, and and still maintain an elevated pace. “The rates are all over the place,” he says. “Even though ecological space is starting to run out, there’s still room for more species.”