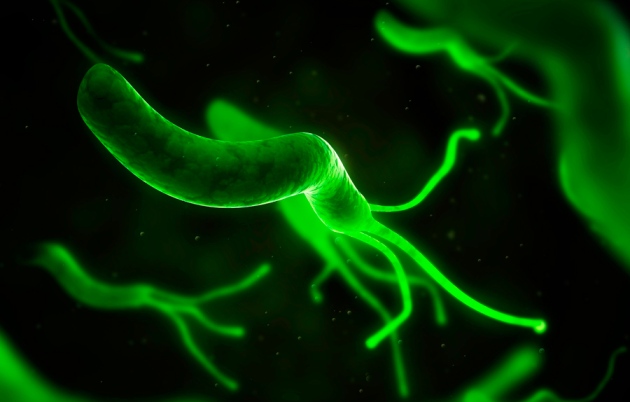 An artist's impression of Helicobacter pylori.

The Colombian town of Tuquerres, nestled high in the Andes Mountains, has one of the highest rates of stomach cancer in the world: about 150 cases per 100,000 people. Meanwhile in the coastal town of Tumaco, just 200 kilometres away, the equivalent rate is only around 6 in 100,000.

This 25-fold difference is partly due to an evolutionary mismatch between human and microbe, according to a new study.

The main cause of stomach cancer is Helicobacter pylori, a bacterium that infects half the world’s population. It is usually harmless, but occasionally leads to tumours. H. pylori has been infecting humans since our origins in Africa, and diversified with us as we spread around the world. But in places such as South America, the arrival of European colonists has broken this long history of co-evolution, leaving some people with H. pylori strains that do not share their ancestry.

Now, a team of scientists led by Pelayo Correa and Scott Williams at Vanderbilt University Medical Center in Nashville, Tennessee, has shown that this mismatch can turn a normally benign infection into a potentially carcinogenic one. When analysed together, the genomes of hosts and microbes give a better prediction of the risk of disease than when considered alone, the team found. Their results are published in Proceedings of the National Academy of Sciences1.

“A lot of people have H. pylori, but very few have bad outcomes. Is that due to the organism or the host?” says Martin Blaser, a microbiologist at New York University School of Medicine. “This paper provides evidence that the fit is important. It’s a very nice advance.”

The researchers first showed that people from coastal Tumaco trace the majority of their ancestry (58%) and most of their H. pylori strains to Africa, because many are the descendants of freed and escaped slaves. By contrast, the mountain population from Tuquerres is 67% Amerindian and 31% European. Their H. pylori strains are mostly European ones, which were imported by conquistadors and somehow displaced the native Amerindian strains.

The team also found that if the H. pylori strains have a different origin to their hosts, they appear more likely to cause cancerous stomach lesions. For example, strains that originated in Africa seem mostly benign in people with significant African ancestry, but were more likely to lead to lesions in people with a largely Amerindian background.

“The hosts and the strains have not had a chance to make peace with each other,” says study co-author Barbara Schneider, also at Vanderbilt University Medical Center.

To their surprise, she and her colleagues found that host–microbe incompatibility had a much greater effect on the risk of cancerous stomach lesions than did a well-studied gene called cagA, which strongly affects the virulence of H. pylori. In fact, the ancestry differences between host and microbe almost entirely accounted for the difference in stomach-cancer risk between the people from Tumaco and Tuquerres.

Mark Achtman, a microbiologist at the University of Warwick in Coventry, UK, says that the association in the paper is clear and new, but adds, “I would also like to see it replicated elsewhere in South America to ensure that it is not reflecting diet or elevation or something else.”

The authors also want to see whether the same trends apply in East Asia, where stomach cancer is unusually common (affecting about 42 in every 100,000 men and 18 per 100,000 women), or in Africa, which has little incidence of stomach cancer despite high levels of H. pylori infection.