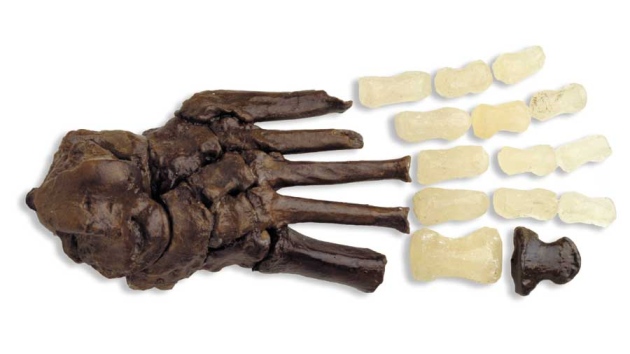 Half a century ago, the British–Kenyan palaeoanthropologist Louis Leakey and his colleagues made a controversial proposal: a collection of fossils from the Great Rift Valley in Tanzania belonged to a new species within our own genus1. The announcement of Homo habilis was a turning point in palaeoanthropology. It shifted the search for the first humans from Asia to Africa and began a controversy that endures to this day. Even with all the fossil evidence and analytical techniques from the past 50 years, a convincing hypothesis for the origin of Homo remains elusive.

In 1960, the twig of the tree of life that contains hominins — modern humans, their ancestors, and other forms more closely related to humans than to chimpanzees and bonobos — looked remarkably straightforward. At its base was Australopithecus, the apeman that palaeoanthropologists had been recovering in southern Africa since the 1920s. This, the thinking went, was replaced by the taller, larger-brained Homo erectus from Asia, which spread to Europe and evolved into Neanderthals, which evolved into Homo sapiens. But what lay between the australopiths and H. erectus, the first known human?

Until the 1960s, H. erectus had been found only in Asia. But when primitive stone-chopping tools were uncovered at Olduvai Gorge in Tanzania, Leakey became convinced that this is where he would find the earliest stone-tool makers, who he assumed would belong to our genus. Maybe, like the australopiths, our human ancestors also originated in Africa.

In 1931, Leakey began intensive prospecting and excavation at Olduvai Gorge, 33 years before he announced the new human species. Now tourists travel to Olduvai on paved roads in air-conditioned buses; in the 1930s in the rainy season, the journey from Nairobi could take weeks. The ravines at Olduvai offered unparalleled access to ancient strata, but fieldwork was no picnic in the park. Water was often scarce. Leakey and his team had to learn to share Olduvai with all of the wild animals that lived there, lions included.

They found the first trace of the potential toolmaker, two hominin teeth, in 1955. But these were milk teeth, which are not as easy to link to taxa as permanent teeth. The team's persistence was rewarded in 1959, when archaeologist Mary Leakey, Louis's wife, recovered the cranium of a young adult. The specimen still boggles the mind because it is so strange: its small brain, large face, tiny canines and massive, thumbnail-sized chewing teeth were not at all like those of H. erectus. Its big molars earned it the nickname 'Nutcracker Man'.

Because Nutcracker Man was found in the same layers as the stone tools, the Leakeys assumed that it was the toolmaker, despite its odd appearance. But when Louis announced the discovery, he was not tempted to expand the definition of Homo. That would have eliminated any meaningful distinction between humans and australopiths. Instead he erected a new genus and species, Zinjanthropus boisei (now called Paranthropus boisei), to accommodate it (see 'Who was related to whom?').

In 1960, Jonathan Leakey, Louis and Mary's eldest son, found the lower jaw and the top of the head of a juvenile hominin. Dubbed Johnny's Child, it very definitely did not belong to the same species as 'Zinj', and the Leakeys began to suspect that it was the real toolmaker.

Phillip Tobias, a palaeoanthropologist known for his work in South Africa, had already been recruited to analyse Zinj, so the Leakeys turned to him to analyse the juvenile cranium. John Napier, a specialist in hand anatomy (as well as sleight-of-hand magic tricks) was recruited to examine wrist and hand bones found with the skull.

An adult foot was excavated along with Johnny's Child, and three years later, a cranium with both the upper and lower jaw was uncovered, as was a very fragmented cranium with well-preserved teeth. Napier had already convinced himself that the juvenile hand bones were like those of modern humans. My PhD supervisor, Michael Day at the University of London had come to the same conclusion about the foot. And Tobias was certain that neither the long crowns of the chewing teeth in the lower jaw nor the large brain case could belong to the australopiths known from southern Africa.

Thus, in a paper published in Nature in April 1964 (ref. 1), Louis, Tobias and Napier made the case for adding the 'handy man' to the genus Homo as H. habilis. They argued that the Olduvai fossils met three key criteria set out in an influential 1955 definition of Homo2: an upright posture, a bipedal gait and the dexterity to fashion primitive stone tools. The team had to relax a brain-size criterion to accommodate the smaller brain (around 600 cubic centimetres) of H. habilis.

The proposal was met with considerable scepticism. Some thought that the fossils were too similar to Australopithecus africanus to justify a new species. John Robinson, a leading authority on australopiths, suggested that H. habilis was a mix of earlier A. africanus and later H. erectus bones. Other researchers agreed that the species was new. Very few accepted that it was the earliest human.

Subsequent finds shaped the debate. A crushed cranium (dubbed Twiggy) from the lowest strata at Olduvai nixed Robinson's argument that H. habilis was a mix of an australopith and H. erectus. Another skeleton indicated that H. habilis had a stronger and relatively longer (or more ape-like) upper limb than did H. erectus and its ilk.

A handful of additional specimens from Ethiopia to South Africa have since been added to H. habilis; the biggest contribution to early Homo has come from Koobi Fora in Kenya. I have been involved with H. habilis for all but two of its 50 years, starting in 1966, when I analysed the ankle bone excavated alongside Johnny's Child. Far from being like that of modern humans, the bone is a much better match for an australopith. Other features of H. habilis have also turned out to be less like those of modern humans than Louis and his team suggested.

In the mid-1970s, Louis and Mary's second son, Richard, offered me the challenge of making sense of the early Homo skulls, crania and jaws from Koobi Fora. It was a lonely task involving 15 years poring over australopiths and H. erectus fossils in museums around the world. It was tempting to focus on the better-preserved specimens, but more often than not it was a skull fragment here or a broken tooth there that provided the key clues to making sense of the whole collection.

Variation in the Koobi Fora fossils was not so easily shoe-horned into a single species as those from Olduvai3. I concluded that there were two distinct types of face within early Homo4, and so in 1992, I suggested that a second early Homo species, Homo rudolfensis, should be recognized5. Two decades later, a team led by palaeontologist Meave Leakey (Richard's wife) confirmed6 the 'two-taxon' hypothesis I had proposed, using a face and two lower jaws found at Koobi Fora. But they — correctly, I believe — refuted my suggestion about which jaws went with which faces. As ever in palaeontology, new fossils test and refine old ideas.

In 1999, British anthropologist Mark Collard and I looked7 afresh at the boundary between Homo and more-primitive hominins by focusing on features that hint at body size, posture, locomotion, diet and life history. For example, how long is the upper limb compared with the lower, or the forearm compared with the upper arm? Do molar teeth erupt early, as in apes, or form slowly and dawdle in the jaw, as in modern humans? All are attributes that help to reveal how an animal makes its living and allocates its energy.

Although H. habilis is generally larger than A. africanus, its teeth and jaws have the same proportions. What little evidence there is about its body shape, hands and feet suggest that H. habilis would be a much better climber than undisputed human ancestors. So, if H. habilis is added to Homo, the genus has an incoherent mishmash of features. Others disagree, but I think you have to cherry-pick the data8 to come to any other conclusion. My sense is that handy man should belong to its own genus, neither australopith nor human.

Beautifully preserved fossils from the Caucasus have now been added to the mix. Just last year, Georgian anthropologist David Lordkipanidze and his colleagues reported9 their analysis of five hominin crania recovered from Dmanisi, a spectacular site on a promontory between two rivers in southern Georgia. They concluded that the range of shapes among these skulls equals or exceeds the variation across H. habilis, H. rudolfensis and H. erectus, and on that basis proposed that all H. habilis-like fossils be reassigned to H. erectus, subsuming three species into one.

Even if you accept that their methods of data capture are sound — which I do not — I question their conclusions. Their method fails to distinguish between a distinctive and large-brained Neanderthal cranium and one of the small-brained Dmanisi skulls, specimens that are separated by close to two million years of evolutionary history. They also take the overall shape of the head to be the arbiter of early hominin taxonomy, yet what sets H. habilis and H. erectus apart are many finer details, such as the size and shape of the inner ear, features of the hands and feet, the strength of long bones and life history. It is equally plausible that the Dmanisi fossils sample a hominin taxon that exhibits a hitherto unknown combination of primitive (for example, a small brain) and derived morphology (for example, brow ridges).

The ongoing debate about the origins of our genus is part of H. habilis's legacy. In my view, the species is too unlike H. erectus to be its immediate ancestor, so a simple, linear model explaining this stage of human evolution is looking less and less likely. Our ancestors probably evolved in Africa, but the birthplace of our genus could be far from the Great Rift Valley, where most of the fossil evidence has been found. The Leakeys' iconic discoveries at Olduvai Gorge should remind us of how much we don't know, rather than how much we do.