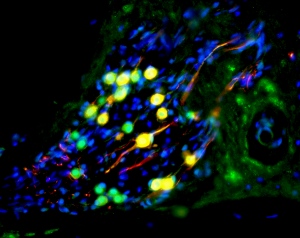 More than 275 million people have moderate-to-profound hearing loss, and many of those cases are caused by a breach in the connection between the inner ear and the brain.

Researchers have now shown how to repair a key component of that connection — the auditory nerve —  by using human embryonic stem cells to restore hearing in gerbils1. "We have the proof of concept that we can use human embryonic stem cells to repair the damaged ear," says lead author Marcelo Rivolta, a stem-cell biologist at the University of Sheffield, UK, whose research appears in Nature today. "More work needs to be done, but now we know it's possible."

Stem cells have been differentiated into auditory nerve cells before, but this is the first time that transplanted cells have successfully restored hearing in animals. Some in the field say that it is a pivotal step that will undoubtedly spur more research. “Research has been stymied by reviewers wanting evidence that stem cells can connect the inner ear to the central nervous system,” says Richard Altschuler, a developmental biologist at the Kresge Hearing Research Institute at the University of Michigan in Ann Arbor.

Rivolta has spent the past decade developing ways to differentiate human embryonic stem cells into the two cell types that are essential for hearing: auditory neurons, and the inner-ear hair cells that translate sound into electrical signals.

His team then transplanted ONPs into the ears of gerbils that had been treated with ouabain, a chemical that damages auditory nerves, but not hair cells. Ten weeks after the procedure, some of the transplanted cells had grown projections that formed connections to the brain stem. Subsequent testing showed that many of the animals could hear much fainter sounds after transplantation, with an overall improvement in hearing of 46%.

The advances are exciting, says John Brigande, a developmental biologist at Oregon Health & Science University in Portland who has a progressive form of hearing loss and is exploring stem-cell-based approaches to restore auditory function. He notes, however, that because the “exquisite architecture” of the inner ear can be damaged in many different ways, ”there won’t be one cure for hearing loss, there will be a variety of interventions tailored to unique conditions”.

The number of people who might benefit from a stem-cell-driven increase in auditory neurons remains unclear, but stem cells could broaden the reach of existing therapies. “Because functioning auditory neurons are necessary for cochlear implants to work, stem cells open a candidate pool that cannot yet be helped,” says Altschuler.

The first treatments for hearing could take at least 15 years to develop, says Stefan Heller, a stem-cell researcher at Stanford University in California who is working on other ways to differentiate stem cells into hair cells and support cells. “The next goals of any protocol are to gain higher levels of efficiency and reproducibility, determine protocol safety and confirm that transplantation leads to prolonged recovery,” says Heller. “Then we can think about patients.”